Was the Rise of ISIS Inevitable? 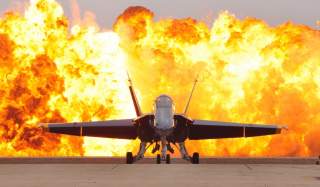 In the latest issue of Survival, Hal Brands and Peter Feaver address an important debate in American foreign policy circles. Was the rise of ISIS inevitable, or was it the result of misguided U.S. policies? Most agree it is the latter, but the dispute gets fraught on the question of whether it was U.S. military interventionism or inaction that deserves the blame. Some say it was the invasion of Iraq that led to the rise of ISIS. Others insist it was Obama’s decision to withdraw from Iraq in 2011.

Brands and Feaver use counterfactual analysis to assess whether different U.S. policy decisions at four “inflection points” could have nipped the rise of ISIS in the bud. The first of these points was the Bush administration’s decision to invade Iraq in 2003. The other three occurred during the Obama administration and include the decision not to press Iraq to allow the United States to leave behind a significant number of U.S. troops, the decision not to intervene aggressively early on in the Syrian civil war, and the decision not to intervene more forcefully to help the government of Iraq defeat ISIS before it took the city of Mosul.

The authors take a middle road, arguing that, “the rise of ISIS was indeed an avertable tragedy,” but that both restraint and activism share the blame. Had U.S. policymakers not invaded Iraq in 2003, or been more aggressive in Iraq and Syria from 2011-2014, they argue, “ISIS might not have emerged at all.”

With suitable analytic humility, however, the authors warn against overconfidence that any of the alternatives would have made a decisive difference to the eventual outcome:

We find, for instance, that limited intervention in Syria in 2011-13 might have had benefits, but it probably would not have shifted the course of the conflict so fundamentally as to head of ISIS’s rise. Likewise, not invading Iraq in 2003 would have left the United States saddled with the costs of continuing to contain that country, whereas striking ISIS militarily in late 2013 or early 2014 might have weakened that organization militarily while exacerbating the political conditions that were fueling its rise. Intervening more heavily in Iraqi politics in 2010 in order to bring about a less sectarian government than that which ultimately emerged, and leaving a stay-behind force in Iraq after 2011, represent a fairly compelling counterfactual in the sense that such policies could have had numerous constructive effects. But even here, choosing a different path from the one actually taken would have meant courting non-trivial costs, liabilities, uncertainties and limitations (p. 10).

We applaud Brands and Feaver, who served in the Obama and George W. Bush administrations, respectively, for their attempt to “move away from polemical and polarized assessments focused on assigning blame, and toward more granular, balanced analysis based on a fairer-minded view of what went wrong (p. 10).” At the same time, there is plenty of room for disagreement over their interpretation of the “what ifs” of such a complex historical question.

The most problematic issue is their treatment of the invasion of Iraq. By bundling the invasion of Iraq with the other three inflection points, the authors introduce a false sense of equality among them, making it seem as if they were all the same sort of decision, and of equal magnitude. In so doing, they obscure the most critical lesson from not only the invasion of Iraq but from the entire war on terror: the fact that American military intervention creates more problems than it solves, leading to destabilization and the amplification of civil conflicts.

To their credit, Brands and Feaver do acknowledge, in the conclusion, that “the most fateful choice was also the oldest one: the decision to invade Iraq in 2003, followed by mismanagement of the occupation” (p. 41) but they then temper that note by arguing that “it is not correct to claim that the invasion of Iraq set in motion forces that led ineluctably to the problems that the United States has faced since mid-2014.”

In a strict sense, of course, this is true. Other things could, in theory, have happened to blunt the rise of ISIS. But only a decision not to invade Iraq in 2003 would clearly and unequivocally have averted the rise of ISIS. The reason is simple: the single clearest cause of the rise of ISIS was the invasion of Iraq. As President Obama explained in 2015, “ISIL is a direct outgrowth of Al-Qaeda in Iraq, that came out of our invasion, which is an example of unintended consequences, which is why we should generally aim before we shoot.” David Kilcullen, who worked on counterterrorism at the State Department in 2005-06 and was senior adviser to General David Petraeus at the height of the Iraq surge in 2007-08, put it even more bluntly: “There would be no ISIS if we had not invaded Iraq.”

It is also true that mismanagement during the Iraq war made things worse. Most notably, the decision to dismantle the Iraqi army and “de-Ba’athify” the post-Saddam government made enemies out of former Ba’athists, many of whom would later join the insurgency. But the invasion and occupation itself was the main ingredient that made Iraq a magnet for Muslim militants from throughout the Middle East and a hotbed of insurgency and terrorism. By 2006, the U.S. National Intelligence Estimate on Trends in Global Terrorism found that the Iraq war was “shaping a new generation of terrorist leaders and operatives.” The war had “become the ‘cause celebre’ for jihadists, breeding a deep resentment of U.S. involvement in the Muslim world and cultivating supporters for the global jihadist movement.”

By contrast, though Obama could have made greater efforts in 2010 to arrange a leave behind force, there was no way in 2010 that the administration could have predicted that their failure to do so would lead to the emergence of an ISIS. Moreover, even had 20,000 American troops remained in Iraq, blocking some of the immediate avenues for ISIS to emerge, their presence would have done nothing to alleviate the motivations behind its rise. In fact, as Brands and Feaver acknowledge, the continued high-visibility presence of U.S. troops would potentially have exacerbated many of the grievances that gave the group its energy and raison d’etre. As the endurance of the Taliban in Afghanistan has shown, the United States might have stayed in Iraq indefinitely without “defeating terrorism” and thus without resolving the problem of how to leave without risk.

Given the fact that it was in the interest of the United States to leave Iraq at some point, 2010 looked about as good as one can imagine for doing so. As Brands and Feaver point out, Al Qaeda in Iraq – the predecessor to ISIS – had been seriously degraded over the previous three years. Certainly the administration must have expected some level of increased instability after the withdrawal, but no one was arguing that a withdrawal would result in the stunning rise of ISIS. On the other hand, many people – including experts in the Bush State Department, predicted much chaos, violence, and civil conflict resulting from toppling Saddam Hussein.

The bottom line is that all three Obama-era counterfactuals that Brands and Feaver explore involve battling ISIS (in either its current or previous iterations) more forcefully and earlier in risky military interventions that themselves would undoubtedly have wrought future negative unintended consequences and blowback. The lesson to draw about how to avoid future monsters like ISIS is not that sometimes America should be more eager to use force, but that military action, especially in the Middle East, inevitably delivers negative unintended consequences, and so should remain an absolute last resort.