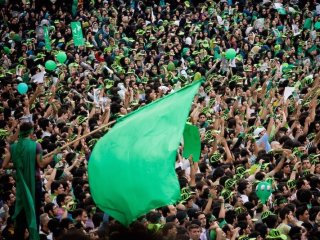 Congressional leaders are angry at the lack response by the White House to Iran’s provocative October 11 medium range ballistic missile test. The United Nations determined the launch was a violation of Security Council resolutions, just days before the Joint Comprehensive Plan of Action (JCPOA) on Iran’s nuclear program was adopted by Tehran and the world powers. U.S. Senator Bob Corker has accused the Obama administration of being unwilling to punish Tehran for fear of undermining the nuclear deal or “empowering hardliners” before critical domestic elections in February. But can the United States really have that kind of impact on Iranian politics?

The short answer is no. Ever since the 1979 Islamic Revolution, U.S. leaders have looked for ways to influence perceived factions of the Iranian government, with little if any success. The Iran-Contra Affair in the 1980s to free American hostages in Lebanon was driven in part by the Reagan administration’s belief that there were moderate politicians in Tehran open to rapprochement with the United States. President Clinton’s secret outreach to reformist President Mohammad Khatami in the late 1990s foundered when Supreme Leader Ayatollah Ali Khamenei and Iran’s Islamic Revolutionary Guard Corps (IRGC) strongly objected to Khatami accepting the overture.

President Obama, perhaps learning from these experiences, focused on communicating with Khamenei directly rather than through hardline President Mahmoud Ahmadinejad or rival factions within the regime. This philosophy likely underpinned the White House’s tepid response to the Green Movement after Ahmadinejad’s contested reelection in 2009. No doubt fearing public U.S. support for the protestors would anger the Supreme Leader and fuel hardliners, the president issued only a few strongly worded statements. The approach did not show results, however, until Khamenei finally demonstrated interest in getting out from the crippling nuclear sanctions imposed in 2012. Regardless of Obama’s caution, change ultimately had to come from within.

The election of President Hassan Rouhani in 2013 and the beginning of the nuclear talks reignited Washington’s impulse to navigate Tehran’s complex internal politics. It became almost conventional wisdom in the West—partly fueled by Iranian Foreign Minister Javad Zarif’s own comments to the media—that the Supreme Leader had Rouhani on a very short leash to reach a nuclear accord, and that the IRGC and other hardliners were poised to sabotage him if he made too many concessions at the negotiating table. American and European diplomats, always wary of pushing too far, felt they needed to walk a tightrope with their Iranian counterparts.

Tehran’s commitment to finding a nuclear deal was never that fragile, though. (This perception was likely generated by Tehran as a negotiating tactic to minimize U.S. and European pressure to make more significant concessions.) The Supreme Leader constantly expressed his doubts about the trustworthiness of the U.S. side, but he showed consistent support for Zarif’s efforts throughout the process. Khamenei and Rouhani also share a long history and strong bond. Whatever qualms the IRGC leadership may have had about a deal never materialized as a serious sticking point.

Iranian decision-makers needed a deal like the JCPOA from the beginning. They are happy with the result and their need for sanctions relief remains the same. No matter how loudly some in the regime protest the new U.S. visa rule changes, or possible punishment for their missile test ban violation in October, Tehran is highly unlikely to back away from the JCPOA. Of course, Iran will not stop stretching the limits of interpretation of the JCPOA and the related UNSC resolutions, nor stop claiming every U.S. action against Iranian interests is a violation of the deal.

This does not mean that the United States has nothing at stake in the current debates and maneuvers in Tehran.

On the contrary, the elections in February will have a potentially huge influence on Iran’s future direction. The vote will not only determine a new Parliament (which could significantly strengthen the moderate camp), but also select a new Assembly of Experts, the body that will choose Khamenei’s successor. Various factions will almost certainly use Iran’s post-deal relationship with the West as a political football. But any impact on the elections from U.S. actions—whether conciliatory or punitive—will be dwarfed by the real factors currently driving Iranian politics: expectations of economic improvement and reform, anti-corruption sentiment, fears of cultural infiltration and social subversion from the West, positioning for the post-Khamenei era, along with—as always—raw ambition and ego.

The bottom line is that Washington should be neither spooked nor enamored by the possibility of affecting real or perceived factional contests in Tehran. Instead, the United States should recognize that Iranian foreign policy is fairly coherent and consistent. The recent report from the International Crisis Group on Iran after the nuclear deal perhaps puts it best:

“Though the Iranian polity is anything but unitary, the West should treat it as such and avoid taking sides in an internal debate that outside actors repeatedly have proven unable to manipulate successfully.”

It is hubris to think otherwise.

J. Matthew McInnis is a resident fellow at the American Enterprise Institute (where this first appeared).