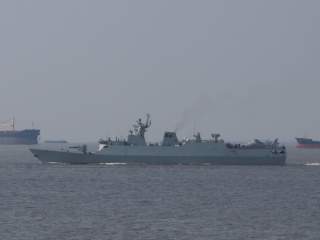 As IHS Jane’s and others reported, citing Chinese state-media outlets, the PLAN officially commissioned its latest Type 056 Jiangdao-class corvette last week. The Huangshi was inducted into service by the PLAN Northern Fleet, the reports said.

Type 056 vessels are 60 meters long and displace 1,500 tons. They “carry one 76 mm main gun, two triple-tube torpedo launchers, and four containerised YJ-83 anti-ship missiles,” IHS Jane’s reported. The report went on to note that the Huangshi’s flight deck enables it to operate a Z-9C helicopter, although the vessel lacks a hanger and therefore its ability to operate helicopters is limited.

Although the Huangshi is the twentieth Type 056 Jiangdao-class corvette that China has commissioned, it is just the fourth of the class to be fitted with towed array and variable depth sonars. This makes it likely that the ship’s primary purpose will be to conduct anti-submarine warfare (ASW).

As IHS Jane’s previously reported of the Type 056 corvettes, “The addition of a VDS will significantly enhance their potential detection capability, specifically when compared to the smaller, rudimentary equipped submarine chasers they are replacing, such as the Type 037 (Hainan) class.”

The launching of the new ships is indicative of China’s growing concern about its paucity of anti-submarine warfare capabilities, particularly further away from its coast. As The National Interest has repeatedly noted, many of the countries locked in maritime disputes with China see submarines as a crucial asymmetric capability they can use to beat back their larger neighbor’s military challenge. Consequentially, there is something of a submarine arms race currently engulfing Asia, with countries as diverse as Vietnam, Thailand, Indonesia, Japan, India, Australia and even Taiwan all seeking to beef up their undersea capabilities.

This is not limited to small Southeast Asian nations or larger regional countries like Japan and India, however. Even many in the United States believe submarines will be essential if Washington is to contend with China’s growing military might. As Dave Majumdar previously argued on The National Interest: “A new class of nuclear-powered guided missile submarines could be the key to maintaining America’s future naval supremacy as new weapons increasingly challenge the dominance of the U.S. Navy’s aircraft carriers.”

In general, the Type 056 corvettes are expected to be increasingly important to China’s navy in the coming years. As Sputnik News, a Russian-state media outlet, has noted, the “Type 056 Corvette was designed in 2012 to replace the older Jianghu class frigates and type 037 model. The Corvette was the first Chinese modular warship that can be deployed as an offshore patrol vessel or multi-role frigate. Designed and built by China State Shipbuilding Corporation (CSSC), Type 056 Corvettes are set to become the backbone of the PLAN, with a class of more than 30 anticipated.”

China’s first Type 056 Corvette entered service in 2012. China has also exported variants of the ship to a number of other countries, including Thailand, Nigeria and Bangladesh.