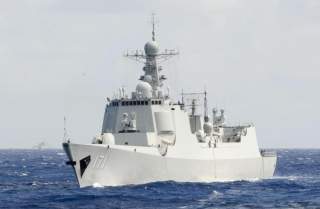 China’s Navy will have some 415 warships by 2030, a former senior U.S. Navy officer predicts.

The prediction was made by James Fanell, the former top intelligence officer for America’s Pacific Command, whose area of operations includes the Western Pacific. Speaking at the annual conference of the U.S. Naval War College’s China Maritime Institute, Fanell said that “The PLAN [People’s Liberation Army Navy] will continue to expand for the next 15 years.”

According to Defense News, Fanell predicted that, in fifteen years, China will have an incredible 99 submarines, 4 aircraft carriers, 102 destroyers and frigates, 26 corvettes, 73 amphibious ships and 111 missile craft. That will give Beijing a total of 415 warships.

This would be a considerable increase over China’s current naval power. In its most recent assessment of Chinese military power, the Pentagon said that “The PLA Navy now possesses the largest number of vessels in Asia, with more than 300 surface ships, submarines, amphibious ships, and patrol craft.” Moreover, in 2030 many of China’s warships are likely to be more advanced.

At last week’s conference, Fanell especially emphasized China’s new Luyang III Type 052D class destroyers, which he referred to as a “game changer” because they will allow China’s Navy to expand its area of operations further out at sea.

“With the vertical launch system, the YJ-18 [anti-ship cruise missile], the active radar system, the Luyang III may not be equivalent to an Aegis, but it's good enough for the Chinese Navy,” Fanell told Defense News following the conference. “I think they're pretty happy with it and that's why they're extending production of the ships — it gives them the ability to extend control beyond the first island chain."

Fanell’s not the first naval expert to highlight the transformative impact the Type 052D class destroyers will have on China’s ability to project naval power. When China was rumored to have launched its first Type 052D destroyer back in 2012, Toshi Yoshihara & James R. Holmes— who together co-authored the groundbreaking book, Red Star over the Pacific: China's Rise and the Challenge to U.S. Maritime Strategy— warned that “The PLAN may have found its premier surface combatant.”

Fanell has a history of making blunt assessments about Chinese naval power and doctrine. When still on active duty, he repeatedly made headlines when publicly discussing those subjects. For example, in 2013 he called China “hegemonic” and said it engaged “aggression,” while also saying it “bullies adversaries.” The following year he told a naval conference that China was planning for a “short, sharp war” with Japan over the Diaoyu/Senkaku Islands, which Tokyo administers but Beijing also claims.

In November of last year, Fanell was removed from his posting on U.S. Pacific Command. It was reported at the time that his removal was over his controversial remarks, which ran counter to Pentagon talking points.

Nonetheless, at his retirement ceremony in February of this year, Fanell warned of a future war with China.

“The strategic trend lines indicate the Communist Party of China is not only ‘rejuvenating’ itself for internal stability purposes, but has been and continues to prepare to use military force,” he said at the time. “Let’s not deceive ourselves. The evidence I’ve been chewing on over the past 15 years is overwhelming. Beijing has prepared for military action and [Chinese] President Xi Jinping’s ‘China Dream’ has a defined timeline to reach this ‘rejuvenated’ end state.”

Many of Fanell’s co-panelists at the recent U.S. Naval War College’s China Maritime Institute’s conference also emphasized that China is rapidly seeking to build up its anti-submarine warfare (ASW) capabilities, which have long been seen as a major weakness of China’s Navy. “Both surface vessels and subs seem to be largely focused on anti-surface warfare," Andrew Erickson, a professor at the U.S. Naval War College, said, according to Defense News.

Christopher Carlson, a former U.S. Navy officer, agreed, stating: "We're going to see some very impressive ASW changes…. We have a problem when they become proficient.”