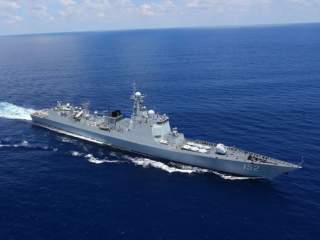 Since at least 2004, Chinese security thinking has undergone a steady shift toward emphasizing the maritime domain. As its economy has grown, the People’s Republic of China (PRC) has become increasingly dependent on the world’s oceans to sustain its economy and people and to move its products to market. Indeed, to maintain and improve what it considers its “comprehensive national power” (zonghe guojia liliang), the PRC clearly needs access to the world’s seas.

Growing Chinese Reliance on the Seas

Several Chinese analysts have written that major power status rests on the ability to secure the seas. Historically, this was true not only for the United Kingdom and the United States, but also for the Soviet Union. Chinese analysts note that during the Cold War the Soviet Union developed its navy in accordance with Admiral Sergei Gorshkov’s thoughts, most notably in his seminal work, Sea Power of the State. These same analysts also cite Alfred Thayer Mahan’s work on the importance of sea power, noting that Mahan emphasized not only constructing a powerful navy, but also building a strong merchant marine and establishing a strong shipbuilding industry, including ports, shipyards and the associated human infrastructure of shipwrights, shipyard workers, engineers, etc. Sea power is more than just a matter of building warships.

This increasing emphasis on the maritime domain was prominently marked in 2004, when then-Party General Secretary and Central Military Commission Chairman Hu Jintao enunciated the “new historic missions” for the Chinese People’s Liberation Army (PLA). One of these new missions is to provide strategic support in maintaining national interests (wei weizhi guojia liyi tigong youli de zhanlue zhicheng). The national interests are not static. They reflect changes in the nation’s development and overall situation. As China has become more dependent on the seas, its interests have incorporated more maritime elements. Consequently, Hu made it clear that it is essential for the PLA to be able to control the maritime domain.

Indeed, Chinese discussions of the “new historic missions” and maintaining the national interest highlight the importance of the oceans to sustaining future Chinese development, noting that whoever grasps maritime dominance (zhihai quan) will unlock the key to survival and sustained development. The seas are not only a primary communications and transportation route, but also a significant trove of resources in their own right. Consequently, China’s ability to exploit what it terms the current period of “strategic opportunity” will rest in part on its ability to preserve its maritime interests, including maritime access.

This growing dependence on the seas has already been noted with regard to energy. In 2014, China surpassed the United States as the world’s largest importer of oil, consuming some 6.1 million barrels more per day than it produced. Hu Jintao talked of the “Malacca Dilemma” because some 80 percent of Chinese energy imports transit the Strait of Malacca, including almost all of the oil and hydrocarbons imported from the Middle East and Africa. China’s economy runs on oil that arrives by sea.

In addition, China has become increasingly dependent on imported food. Since 2008, China has been a net grain importer. In 2013, China imported some 13 million metric tons of grain (including wheat, corn, and barley) as well as 63 million metric tons of soybeans, much of which are processed for cooking oil. In January 2013, Chen Xiwen, head of the Chinese Communist Party’s rural policy office, indicated that China was no longer intent on ensuring food self-sufficiency as part of its food security concerns. This reflected the reality that, as China has become both more prosperous and more urbanized, it could not avoid importing more grain and more meat. As with energy, China largely depends on the sea lanes for its food imports.

These economic factors generate major strategic imperatives for preserving Chinese access to global waterways. The physical shift in China’s economic center of gravity further underscores this. In the 1950s and 1960s, China’s economic construction was centered inland, as part of the “third line.” Dispersed and located in relatively inaccessible valleys, Chinese economic development was organized to support a post-nuclear guerilla war, rather than maximizing economic output. With the rise of Deng Xiaoping, however, the locus of economic activity shifted to the coast to take advantage of easier access to transportation and energy. As a result, China’s new industrial centers have lost the buffer of thousands of square miles of land, which provided both early warning and potential defense sites for their protection. If the PRC wishes to keep these new centers safe, it must establish control over the seas and airspace above them to keep potential adversary forces and ordnance away. That is, it must be able to establish maritime dominance over the neighboring seas, ideally out to the maximum range of an adversary’s weapon systems.

Notably, Chinese assessments of the importance of the maritime domain as part of the “new historic missions” place it alongside the outer space and cyberspace domains in importance. All three of these venues are key areas in which the PLA is expected to preserve Chinese interests—and establish superiority. The most recent Chinese defense white paper echoes this same triumvirate. In the 2015 edition of China’s Military Strategy, force development is prioritized for the “critical security domains” of the seas, outer space, and cyberspace.

This emphasis on making China a major maritime power (haiyang qiangguo) is also seen elsewhere. For example, at a 2013 conference in Shanghai, Chinese maritime officials laid out a timeline calling for China to become one of the top eight navies by 2020, one of the top five by 2030, and one of the top three by 2049 (the centennial of the PRC’s founding). In the new national security law passed in 2015, one of the first tasks enumerated for the PLA is to provide for maritime security. Article 17 states:

"The State increases the construction of border defense, coastal defense, and air defense, taking all necessary defense and control measures to defend the security of continental territory, internal waterbodies, territorial waters and airspace, and to maintain national territorial sovereignty and maritime rights and interests."

This growing emphasis on maritime power and its role in Chinese national security thinking is reflected in the steadily expanding capabilities of the People’s Liberation Army Navy (PLAN). As recently as the 1990s, the PLAN was largely oriented toward near-shore and near-sea operations. The former focuses on countering attempts by an adversary to land forces on China’s shores, as well as riverine operations and activities in inland waterways, which are comparable to “brown water” operations. Near-sea (jinhai) operations involve light and medium naval forces, operating farther from shore, but for limited duration. They are oriented toward not only forestalling invasion of the Chinese mainland, but challenging adversary operations in key nearby maritime areas, including the East and South China Seas and the Yellow Sea. They constitute a combination of “green-water” and some “blue-water” operations.

However, as China’s dependence on the maritime domain has increased, the PLAN has expanded its operational envelope, now regularly operating in the “far seas” (yuanhai). Beginning in December 2008, the PLAN has regularly rotated several surface combatants and replenishment ships to the Gulf of Aden as part of the multinational anti-piracy forces in that area. As of January 2015, with the nineteenth such rotation, a significant portion of the PLAN has participated in these far-seas operations, including 16,000 sailors, 1,300 marines, 42 helicopters and 30 PLA surface combatants (a substantial fraction of China’s 80 major surface platforms).

At this time, a significant portion of the PLA’s surface ship commanders are believed to have participated in these operations, gaining valuable experience in various aspects of far-sea operations from navigation to personnel management to underway replenishment. As the Chinese have begun deploying submarines as part of these anti-piracy patrols, not only have more officers from more branches gained experience, but the PLAN has also had an excellent opportunity to practice naval combined arms operations, including blue-water anti-submarine operations.

This shifting focus is reflected in the types of ships fielded by the PLAN. In the 1990s and through the early 2000s, the surface fleet was largely comprised of scores of fast attack craft (FAC) armed with torpedoes and missiles, a holdover from the era of People’s War at Sea as mandated by Mao. With their short-range anti-ship missiles and torpedoes, any attack would have had to be pressed to very close range. The larger combatants were primarily obsolescent destroyers and frigates. The most modern ships in 2000 were several Soveremennyy-class destroyers purchased from the Russians, while the most modern domestically produced vessels were the Luhai destroyers and Jiangwei frigates.

The submarine fleet was little better. Numerically large, much of the fleet was comprised of 1950s-vintage Romeo-class boats obtained from the Soviet Union and domestically produced Ming-class (an improved Romeo) and Song-class boats. The few Han-class nuclear-powered attack submarines were very noisy and spent little time at sea. It appeared that the Chinese would need to rely on imports of Russian Kilo-class diesel-electric boats (among the quietest boats in the world) to remain competitive.