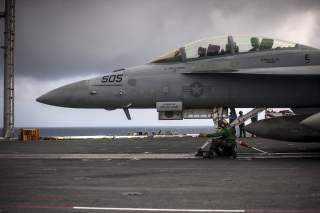 On Monday, North Korea conducted its latest ballistic test in Wonsan, in the eastern part of the country. The missile, believed to be a version of its Scud-C missile, traveled roughly 250 miles (four hundred kilometers) before falling into the Sea of Japan.

Immediately following the test, North Korea said it was aimed at demonstrating a new maneuverable reentry vehicle (MaRV), which allows the warhead to make inflight corrections during its terminal phase to greatly improve accuracy. “The present test-fire aimed at verifying the technological indices of the new-type precision guided ballistic rocket capable of making ultra-precision strike on the enemies’ objects at any area,” the state-run Korean Central News Agency said.

The report further claimed that the missile landed within seven meters of its intended target, which would be shockingly accurate. According to Yonhap News Agency, a South Korean publication, North Korea’s normal Scud missiles have a circular error probable (CEP), a commonly used accuracy measurement, of between 450 and 1,000 meters, while China’s much-discussed carrier-killer missile has a CEP of thirty to forty meters.

That claim was not included in KCNA’s English-language report on the missile test, but U.S. officials did raise that concern in earlier failed tests of what was believed at the time to be the same Scud-variant tested on Monday. The Yonhap report went on to claim that “the North’s pursuit of its own anti-ship ballistic missile (ASBM), often called an ‘aircraft carrier killer,’ is an open secret.”

North Korea’s claim was likely intended to intimidate the Trump administration, which has frequently used carrier deployments as shows of force in the face of Pyongyang’s provocations.  America currently has two carrier strike groups deployed near North Korea, and recent reports suggest that another may be on its way. That is highly unusual. As James Fanell, a former intel officer with U.S. Pacific Command, told Gordon Chang, “I served in the U.S. Navy from 1986 to 2015, and I do not remember a time that the U.S. has ever deployed three aircraft carrier strike groups to the Korean peninsula.”

That being said, North Korea’s claim to have the ability to strike U.S. aircraft carriers is outlandish. To begin with, although it is impossible to verify exactly how accurate the missile is, it is inconceivable that it is CEP is measured in single-digit meters. Indeed, Michael Elleman, a senior fellow for missile defense at the International Institute for Strategic Studies (IISS), tells the National Interest, “Over the long term, NK might hope to substantially improve accuracy using a MaRV, much like the Chinese do with their DF-15.  But achieving greater precision will require many years of development and testing.  It is worth noting that the Soviets developed the Scud-VTO, or Aerofan, over the course of almost two decades.”

John Schilling, an aerospace expert, concurs, telling The National Interest, "developing a maneuvering reentry vehicle is a technically challenging task which will likely require many test flights. It took the United States eight years to develop the Pershing II, and four years from the first test flight to operational deployment.  North Korea, lacking the industrial resources of the United States and largely isolated from the world economy, will likely take somewhat longer even if this is a high-priority program for them.”

More importantly, regardless of the actual accuracy of North Korea’s missile, striking an aircraft carrier with a ballistic missile requires a large infrastructure of support systems that North Korea simply does not possess. As Robert Farley has noted in the National Interest, “An anti-ship ballistic missile is more than just a missile; it requires a broad, sophisticated support system.” That is because the carrier will be moving while the missile is in flight, and thus the warhead’s path must be adjusted after the missile is launched. This is why North Korea boasted about the maneuverable reentry vehicle that allows the missile to do this. Nonetheless, successfully locating the carrier and changing the warhead’s flight will require, as Farley points out, “the operation of a sophisticated set of sensors, as well as a communication system capable of integrating these sensors and transmitting information to shooters.”

Similarly, Andrew Erickson has pointed out that to hold enemy vessels at risk with ballistic missiles, a country needs “the successful achievement of high-quality, real-time satellite imagery and target-locating data and fusion as well as reliable indigenous satellite navigation and positioning.” North Korea has none of these capabilities.

Still, one South Korean defense expert told Yonhap that North Korea “has been actively developing a sensor to raise the accuracy of its missiles since the early 2000s.” And even if the new Scud reentry vehicle cannot threaten America’s aircraft carriers, a more accurate missile would be extremely valuable to North Korea in other ways. For instance, greater accuracy would allow Pyongyang to strike U.S. and Republic of Korea forces and assets deep inside South Korean territory. It would also allow North Korea to threaten valuable civilian targets, like the port of Busan. As Schilling, the aerospace expert, explains: "Almost certainly the first generation of North Korean maneuvering reentry vehicles will be used against targets on land."

In fact, it were these very concerns that led the United States and South Korea to agree to a deployment of the Terminal High Altitude Area Defense (THAAD) system on the Korean Peninsula. Somewhat lost in all of the controversy over the THAAD deployment is the fact that the system’s interceptors have an extremely limited range of roughly 125 miles. That means it can’t even protect Seoul, the South Korean capital city, from where it is currently deployed in the country. Instead, as Eric Gomez has written in these pages, THAAD’s primary purpose is to “protect several locations that are essential for conducting sustained combat operations against North Korea, such as the port of Busan and Kunsan air base.”

And THAAD is much more capable of dealing with maneuverable reentry vehicles than the Patriot missile defense system, which intercepts missiles at much lower altitudes. Elleman, the senior fellow at IISS, tells the National Interest that the North Koreans could use MaRVs to complicate Patriot intercepts “by randomly alter the RVs path as it descends below 40-km altitude.” But, Elleman adds, “because THAAD and Aegis SM-3 interceptors operate above the atmosphere, they would not be impacted by the MaRV.”

Image: Preflight safety check of a catapult aboard USS George Washington in the South China Sea. Flickr/Department of Defense