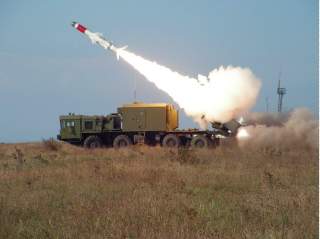 "Deploying the system from the move, the personnel carried out a missile launch on a sea target complying with the specified standards," a Pacific Fleet spokesman, Captain First Rank Roman Martov, is quoted of saying.

Earlier, TASS had reported that the Bal-E CMS “consists of a self-propelled command control and communications centre, self-propelled launchers, a transport and reloader machine and communications vehicle, a total of- up to 11 special vehicles.” It added that the system “is capable of hitting targets at ranges up to 120 kilometers at any time and under any weather conditions.”

The Bal-E CMS is usually equipped with KH-35 anti-ship missiles, which have fully autonomous after-launch missile guidance. The Bal-E can single fire or conduct salvo fires of up to 32 missiles at any one time. Each Bal-E missile system is equipped with 64 missiles.

The Bal-E is already in service with some of Russia’s other fleets, such as those around the Caspian Sea. It was delivered to Russia's Pacific Fleet last year, and this was the first time that fleet has tested it.

This is consistent with Russia’s overall position of building up its military forces in its Far East and the Pacific Oceans. As my colleague, Rebecca M. Miller, reported on The National Interest last week, Russia is rapidly building up the number of S-400 air and missile defense systems in the region. The S-400 is one of the most advanced air defense systems in the world, and can be equipped with missiles with ranges between 120 km to 400 km.

The Pacific Fleet, in particular, has been growing as of late. Already it is the second largest Russian fleet, with 73 vessels, including 23 submarines and 50 surface warships, according to The Diplomat.

One of its more notable recent additions is a new Borei-class nuclear-powered ballistic missile submarines (SSBN). The Pacific Fleet received one of the Borei-class SSBNs in 2013, and is expected to ultimately have at least six of them. Furthermore, the Pacific Fleet is expected to receive the first six deliveries of Russia’s new Yasen-class attack nuclear submarines (SSGN).

Russia’s focus on building up the Pacific Fleet’s submarine force is consistent with the regional trend. As I noted last week, maritime Asia as a whole is engaged in something of a submarine race. Moscow appears to intend to do its part to keep up.