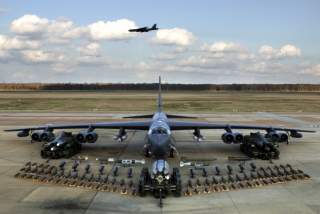 “Two B-52 Stratofortresses assigned to the 2nd Bomb Wing, Barksdale Air Force Base, Louisiana, returned today from a 44-hour, non-stop mission to Australia,” U.S. Strategic Command said in a statement posted to its website on July 7.

During the flight, the B-52s conducted an inert conventional weapons drop on the Delamere Air Weapons Range in northern Australia, just south of Darwin where U.S. Marines are stationed on a rotating basis. The strategic bombers also performed a low-approach at RAAF Base Tindal during the flight.

The statement went on to say that the mission, which was conducted with Australian forces, “demonstrates the United States’ ability to project its flexible, long-range global strike capability and provided unique opportunities to synchronize strategic activities and capabilities with a key ally in the U.S. Pacific Command (USPACOM) area of operations.”

The statement further quoted, Adm. Cecil D. Haney, the commander of Strategic Command, as saying, “These flights are one of the many ways the U.S. demonstrates its commitment to a stable and peaceful Indo-Asia Pacific region.”

He added: “In addition to strengthening aircrew skills and enhancing their familiarity with operating worldwide, combined training and theater security cooperation engagements with our regional allies serve to improve our interoperability and capability to respond to any potential threat together.”

The recent bombing run was first reported by Bill Gertz in the Washington Times.

Last month, David Shear, America’s assistant secretary of defense for Asian and Pacific Security Affairs, sparked a controversy when he mistakenly told the Senate Foreign Relations Committee that the United States planned to base B-1 bombers in Australia. "We will be placing additional Air Force assets in Australia as well, including B-1 bombers and surveillance aircraft.” Shear said, according to Australian media outlets.

“I'm not playing with words here. I can give you an absolute guarantee that there has simply been no discussion with the Americans formally or informally about bloody B-1s and surveillance aircraft. Basing is out of the question. I think this guy was off the reservation,” the official was quoted as saying.

An official from the U.S. embassy in Australia later confirmed Canberra’s statements, telling reporters: “the United States has no plans to rotate B-1 bombers or surveillance aircraft in Australia.”

However, many Australian defense analysts believe that the B-1 bombers will eventually be placed in Australia on a rotating basis. Greg Sheridan, for example, who is a prominent foreign affairs commentator in Australia, wrote:

“The Abbott government has no in-principle objection to the presence of B-1 bombers, and many well-informed observers regard their eventual presence in Australia as all but inevitable. The problems the government had with the Shear testimony were about the implication of basing planes in Australia, and connecting the rotations explicitly to China.”

Australia walks a fine line when it comes to its China policy. On the one hand, Canberra is greatly unnerved at China’s recent aggression, particularly in the South China Sea. It has repeatedly spoken out against Chinese provocations, stepped up its patrols of the South China Sea, and deepened its defense cooperation with countries like the United States and even Japan.

At the same time, China remains Australia’s largest trading partner, which forces Canberra to temper actions that might upset Beijing.

As such, the United States refused to identify a target for the recent B-52 bombing run, although it took place as U.S.-Chinese tensions have risen over the South China Sea. An anonymous Pentagon official later confirmed to Bill Gertz that the target was indeed China.