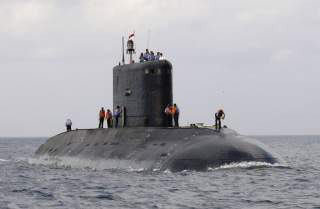 The Indian government will be launching a major naval expansion soon that will include the indigenous construction of seven stealth frigates and six nuclear powered attack submarines. Indian Prime Minister Narendra Modi’s cabinet approved plans to build the 13 new ships at about a cost of one trillion rupees or about $16 billion on Tuesday.

The expansion would triple the size of India’s nuclear submarine fleet and comes on the heels of Narendra Modi’s pitch to increase the proportion of indigenous defense production in India. In a recent speech, Modi said that he would like the percentage of domestic procurement in India to increase to 70 percent. According to The Times of India, this decision comes at a time when India has a “critical necessity” to boost its “overall deterrence capability” in the Indian Ocean, especially the region stretching from the Persian Gulf to the Strait of Malacca.

India’s move is widely understood to be aimed at countering China and its alleged “String of Pearls” strategy as well as increasing Chinese naval forays into the Indian Ocean. India was spooked last year when two Chinese submarines docked in Sri Lanka.

India’s plans to procure six nuclear powered attack submarines (SSN) are also in line with regional trends where many nations are building up their undersea fleets as a way to counter Beijing’s growing naval might. Many see China’s lack of anti-submarine warfare capabilities as its Achilles’ heel. India already operates one Russian-built nuclear submarine and it is currently building an indigenous one. The latter is likely to be a ballistic missile nuclear submarine (SSBN) rather than a SSN.

In addition to its nuclear submarines, India also operates some fourteen diesel-powered attack submarines. The backbone of the fleet is its ten Kilo-class Type 877EM (Sindhugosh-class), which are being fitted to carry the Klub/3M-54E Alfa cruise missile system. Delhi also operates four of the German-built Shishumar-class Type 209/1500 subs.

India’s new nuclear submarines will be about 6,000-tons each. They will be built in the Naval Dockyard of the city of Visakhapatnam in the state of Andhra Pradesh on India’s eastern coast.

(Recommended: The Indian Navy Has a Big Problem: The Subsurface Dilemma)

However, according to an Indian government source, the submarines and warships will not come into service until next decade.