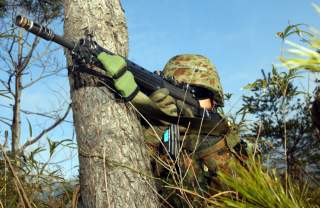 Japan is planning on deploying 600 troops to islands near the ones it disputes with China.

Russia’s Sputnik news, citing unnamed Japanese government officials, said that Japan’s Defense Ministry has decided to deploy 600 soldiers from the Ground Self-Defense Force to Miyako and Ishigaki Islands in the southwestern part of Okinawa Prefecture. The soldiers will be equipped with anti-ship missiles, the report also said.

Already, Miyako hosts a small radar installation that is maintained by the Self Defense Force Air Force. Besides that, however, and in contrast to Okinawa’s main island, the Sakishima Islands— which include Miyako, Ishigaki and Yonaguni— have remained largely unmilitizaried. This appears to be changing in response to the ramping up of tensions with China over the Senkaku Islands.

For example, back in January 2013, Japanese media outlets began reporting that the Defense Ministry was considering proposals to deploy F-15s to various parts of the Sakishima Islands, in response to Chinese incursions around the Senkaku Islands. One unnamed Japanese defense official was quoted as saying at the time, “We can't do anything about the distance. We need to think about whether we can deploy a fleet closer" to the Senkaku Islands.

More significantly, in April of last year, Japan announced that it was building a military post on Yonaguni Island for surveillance purposes. Along with the radar equipment, Japan was expected to deploy around 100 GSDF troops. At the time of the announcement, then- Japanese defense minister, Itsunori Onodera, “decided to deploy a GSDF (Ground Self-Defense Force) unit on Yonaguni Island as a part of our effort to strengthen the surveillance over the southwestern region.”

Yonaguni Island is located around 150 km south of the disputed Senkaku Islands.

The latest news of a potential military deployment to Miyako and Ishigaki is therefore part of a growing trend of Japan increasing its ability to defend the Senkaku Islands in the face of increased Chinese provocations. In fact, in December of last year, five Chinese aircraft—one Y-9 intelligence gathering plane, two Y-8 airborne early warning planes and two H-6 bombers— flew over the Miyako waterway. China claimed they were on their way to a Chinese military exercise being held further afar in the Western Pacific.

It was not the first time Chinese aircraft had flown near the Miyako islands; back in July 2013, Japan’s Defense Ministry revealed that a Y-8 airborne early warning plane had flown between Okinawa’s main island and Miyako Island.