Watch Out: China and Russia Are Working Together at Sea 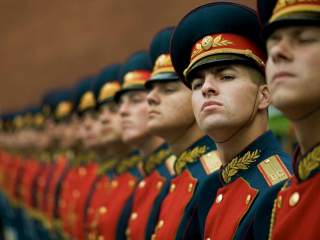 Despite plentiful signs that Russia-China relations are growing ever closer, naysayers suggest that Moscow and Beijing are constrained from moving beyond a tepid collaboration. An awkward Cold War history, cultural misunderstanding, geopolitical competition, economic and demographic asymmetries and even a visceral contempt are said to comprise the myriad reasons why Chinese and Russians just cannot get along, let alone engage in strategic coordination.

However, the rapidly changing balance of power in the western Pacific (not to mention thirty-plus years of stable relations) belies this interpretation. A major pillar of China’s A2/AD architecture in this decade and the next are the multiple variants of Flanker interceptor and attack aircraft that Beijing has purchased and deployed by the hundreds. At the moment, the Chinese J-11, J-15, and J-16 are all potent modifications of the successful Russian design. And the ink is hardly dry on a deal for China to receive a couple of dozen Su-35s. Or consider the YJ-12 and YJ-18 supersonic antiship missiles now being deployed for the first time to Chinese aircraft and vessels. Both weapons are Chinese spinoffs from Russia’s recognized missile prowess. Never mind submarine technology and air defense. Since the early 1990s, Beijing’s resources helped Russia’s arms manufacturers to survive during the lean years, while Moscow has enabled China’s remarkable leap into advanced weaponry.

Even as the above developments have unfolded with major strategic consequences over the last two decades, a more ambitious program of military collaboration now seems to be in the works. In particular, joint naval drills on an unprecedented and growing scale during 2014 and 2015 imply a new level of seriousness. This edition of Dragon Eye will review some Chinese-language descriptions of these exercises with the hope of gaining additional perspective on their significance.

The 2014 exercise that took place in May in the East China Sea involved fourteen surface ships and two submarines. A detailed account published in the Chinese naval magazine Naval & Merchant Ships [舰船知识] contrasted this naval exercise from other recent multilateral naval exercises hosted by the Chinese Navy. Unlike these other drills involving multiple nations and emphasizing nontraditional security threats [非战争威胁], the exercise with Russia took as its central focus “naval combat” [海上作战]. Indeed, the article observes that this was the first time that a China-Russia naval exercise involved a “confrontational” drill between submarine and surface elements. Another particular emphasis of this naval exercise was a focus on “over the horizon” [超视距] attack doctrine honed by the Russian Navy “as the most effective tactics against US carrier groups [对美国航母编队最有效的战术]”. Some Chinese pride was evident in this review when it was revealed that China’s naval air-defense capabilities far exceeded those of the participating Russian ships.

A year later, nine ships combined participated in another joint Russia-China naval exercise. To the surprise of many, this joint exercise took place in the Black Sea—a zone of significant military tension since the Ukraine crisis began in late 2013. In a historic first transit of the Turkish Straits, the Chinese naval squadron diplomatically opted to fly the Turkish flag. But the PLA Navy’s return to the Mediterranean, following its evacuation of nationals from Libya in 2011 and its participation in the international effort to rid Syria of chemical weaponry in 2013-14, together suggest that Beijing’s naval foray into the area represent the first Asian power to flex its muscles in European waters since the Japanese Navy took up escort duty in the area as a favor to the Allies during the First World War. Notably, a description of the Black Sea exercise in Shipborne Weaponry [舰载武器] reveals that this exercise also had an anti-submarine warfare (ASW) component, as well as an effort to develop a common operating picture (COP) for the two fleets operating together.

However, an annual China-Russia joint naval exercise was deemed insufficient, and a significantly larger drill took place in the Sea of Japan during August 2015. That exercise involving twenty-three surface vessels, two submarines, fifteen fixed-wing aircraft, eight helicopters, as well as both airborne forces and marines, comprised the largest ever Chinese-Russian joint naval exercise. The exercise, based out of Vladivostok, tackled complex subjects, including not only ASW but also mine countermeasures and amphibious attack. According to another report in Shipborne Weaponry [舰载武器], the Russian-Chinese naval maneuvers have progressed from relatively simple communications drills to limited intelligence sharing to direct transfer of radar and sonar data. The report observes “closer and closer [naval] cooperation,” and an increase in the level of “combat realism” [实战化] with each iteration. With seven surface vessels in the exercise, including two of China’s relatively new, large Type 071 amphibious attack ships, Beijing’s commitment to this joint activity is hardly in doubt. However, a singular new feature of this naval exercise was the inclusion of numerous Chinese jets that flew into Russia from China, both J-10s and J-7s, and even a PLA Air Force KJ-200 early-warning/ battle-management aircraft. Deploying this uniquely valuable platform to this exercise does indeed convey the notion that China and Russia are now seeking to move the military partnership to a higher level.

In this column, Chinese admiration for contemporary Russian diplomacy and especially Vladimir Putin’s conduct of military diplomacy has been noted before. Such admiration is apparently also evident in naval circles as a 2015 article from Navy Today [当代海军], the official magazine of the PLA Navy, observed approvingly that Russians are a “war-like nation” [战斗民族]. A litany of aggressive Russian naval maneuvers, for example Russian submarines deploying off of Britain and Sweden, are described in the piece as is the Russian Navy’s much increased operational tempo generally. According to this Chinese Navy publication, Russians believe in the principle that “Might makes right” [强者在弱者面前永远正确]. In explaining Russia’s success in the Crimean crisis [克里米亚危机], the author explains that the keys to Moscow’s success were both the fierce Russian character, as well as the Kremlin’s “hidden wisdom and meticulous planning.”

It is ironic that back in the late 1950s, at the end of the “golden era” of Sino-Soviet strategic cooperation, the issue of a naval cooperation, specifically the request for a Soviet submarine communications transmitter to be based in northeastern China, was a major factor in spiraling mutual suspicion between the two countries. Today, naval cooperation appears to be an ever more dynamic aspect of the developing nexus between the panda and the polar bear. Of course, there are yet areas of naval cooperation that Moscow and Beijing have yet to explore. For example, nuclear submarines are notably absent from available reports on these exercises. Yet, it still seems decidedly contrary to U.S. national interests to pursue policies that drive these Eurasian giants into a military alliance.