Watch Out, China: Taiwan and Japan Are Teaming Up 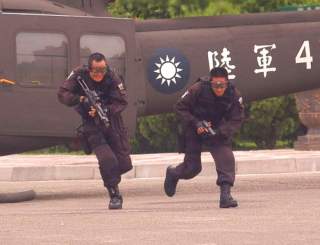 In office less than a week, Taiwan’s President Tsai Ing-wen has already defused a potential conflictual situation in the East China Sea. Her administration has decided to leave the resolution of a dispute with Japan over the status of Okinotori as a rock or island to the discretion of the UN Commission on the Limits of the Continental Shelf.

Tsai’s action, while reversing the position of the Ma Ying-jeou administration on this issue, is consistent with Taiwan’s overall posture of respecting international law and working out disputes on the basis of negotiation and arbitration rather than through the use of force, threats, and coercion as is China's practice.

The Tsai decision also reflects the friendly relationship between Taiwan and Japan, Taiwan being the only country with a relatively positive experience under former Japanese occupation.

Befitting its exemplary history of leadership in humanitarian assistance and disaster relief, Taiwan was the world’s primary contributor in the response to the 2011 earthquake, tsunami, and nuclear radiation disaster in Japan. Including both government and private donations, Taiwan gave $165 million, exceeding America’s $125 million, and far eclipsing the $4 million from China with an economy several times larger than Taiwan’s.

Unfortunately, out of ill-advised deference to China, Japan initially did not acknowledge Taiwan’s compassion and generosity. A month after the event, Prime Minister Kan expressed Japan’s thanks by taking out full page advertisements in newspapers in China, Russia, South Korea, and France – but, sadly, not in Taiwan. An accompanying government statement singled out the United States, China, Australia, Mexico, and Europe for sending help, again without mentioning Taiwan.

Curiously, defensive Japanese foreign ministry officials said the thank-you list was based not on the magnitude of the donations but on “the size of the country and the impact it may have on its neighbor countries." That reticence failed to reciprocate Taiwan’s expression of public gratitude for Japanese help after its own 1999 earthquake.

Subsequently, Japan did correct its error and publicly thanked Taiwan for its help. While the slight may have hurt the feelings of some Taiwanese, overall public attitudes toward Japan remain positive. Polls show that favorable opinions of the Taiwanese people toward Japan and of Japanese toward Taiwan rank at 65% or higher.

The friendly Taiwan-Japan relationship was also evident in 2014 when Tokyo and Taipei signed a historic fisheries agreement that enabled fishermen from Taiwan to operate in the waters around the Senkaku /Diaoyutai islands.

On security issues, Japan and Taiwan share an interest in assuring that Taiwan does not fall under China’s control, a conviction that has been reinforced under Abe’s administration. Japan’s 2013 White Paper identified a Chinese attack on Taiwan as one of the contingencies that could bring Japan and China into conflict.

The deepening U.S.-Japan defense relationship virtually assures that result since the new U.S.-Japan defense guidelines agreed to in 2015 commit Japan to come to the defense of U.S. forces under attack, which could certainly happen in a Taiwan Strait scenario.

With President Obama visiting Japan, it is an opportune time for Abe to make a clear statement of Japan’s support for Taiwan’s security. Such an expression of strategic clarity would be even more effective if Abe and Obama were to make it jointly.

Abe could propose that the Japanese Diet take up consideration of a Japanese counterpart version of the Taiwan Relations Act. He could also initiate a reconsideration of the use of “Chinese Taipei” on official Japanese documents in favor of “Taiwan.”

As for the U.S. president, Obama bypassed Tsai’s inauguration and missed a unique opportunity to remove any doubts in Xi Jinping’s mind about U.S. commitment to Taiwan and the region. But it is not too late—he could still make a drop-in visit to Taiwan before heading back to Washington.

The U.S.-Japan cooperation with Taiwan could be another democratic trilateral relationship like that linking Washington, Tokyo, and Seoul against growing threats from China (and North Korea). Beijing will surely cry both containment and interference with its internal affairs.

But China's leaders may finally begin to get the message that its aggressive actions in the South and East China Seas and across the Taiwan Strait are bringing about the very counter-China groupings among countries in the region that it fears.

To reverse the maxim that China scholars used to bandy about to call for restraint in dealing with China: if you treat your neighbors and their friends as adversaries, you will get adversaries.

Joseph A. Bosco served in the office of the secretary of defense, 2002–10.