Watch Out, India: Pakistan Is Ready to Use Nuclear Weapons 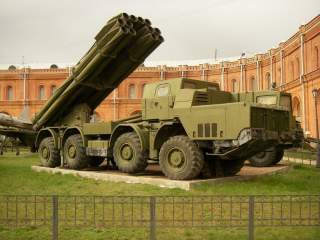 Pakistan is ready to use nuclear weapons against India, a senior Pakistani official confirmed on Monday.

Appearing on the Pakistani television channel “Geo,” Pakistan’s Defense Minister Khawaja Asif said that Islamabad is willing to use nuclear weapons to ensure its survival.

“We should pray that such an option never arises, but if we need to use them (nuclear weapons) for our survival we will,” Asif said, according to Geo’s website. His remark was widely reported by Indian media outlets.

Asif went on to accuse India of supporting anti-Pakistani terrorist groups in a proxy war against Islamabad. “Fuelling terrorism directly or indirectly is India’s proxy war in Pakistan,” Asif said. He singled out Tehreek-e-Taliban Pakistan (TTP), the Pakistani Taliban, and Baloch separatists as two of the groups that India is allegedly supporting.

Nor is Asif the first high-level Pakistani official to threaten to use nuclear weapons. Former President Pervez Musharraf issued a similar threat (albeit, after he left office), when he stated: “We do not want to use nuclear capability but if our existence comes under threat, who do we have these nuclear weapons for?”

More tellingly, in an interview back in 2002, Lt. Gen. Khalid Kidwai, the first head of the Strategic Plans Division (SPD), which is responsible for Pakistan’s nuclear arsenal, outlined four scenarios where Pakistan would consider using nuclear weapons against India:

Notably, in his interview this week, Asif seems to suggest that India is doing the fourth scenario by supporting terrorist groups inside Pakistan.

Pakistan has backed up its rhetoric by creating an operational nuclear force capable of making good on its threats. For example, when Indian officials began discussing a Cold Start doctrine—in which Indian forces would make quick and limited incursions into Pakistan in response to Islamabad-supported terrorist attacks in India—Pakistan began developing tactical nuclear weapons to thwart such attacks.

In 2011, Pakistan first tested its Hatf-9 (Nasr) missile, which it referred to as a “Short Range Surface to Surface Multi Tube Ballistic Missile.” The statement announcing the test elaborated: “NASR, with a range of 60 km, carries nuclear warheads of appropriate yield with high accuracy, shoot and scoot attributes. This quick response system addresses the need to deter evolving threats.”

It went on to add that “the test was a very important milestone in consolidating Pakistan’s strategic deterrence capability at all levels of the threat spectrum.”

It has continued to test the Nasr missile in the years since, including using firing it in four missile salvos using a “state-of-the-art multi-tube launcher.”

Earlier this year, Marine Corps Lt. Gen. Vincent R. Stewart, the director of the U.S. Defense Intelligence Agency, confirmed that Pakistan is continuing to build up a tactical nuclear weapons force. In testimony before the Senate Armed Services Committee in February, Stewart said: “We anticipate that Pakistan will continue [its] development of new delivery systems, including cruise missiles and close-range ‘battlefield’ nuclear weapons to augment its existing ballistic missiles.”