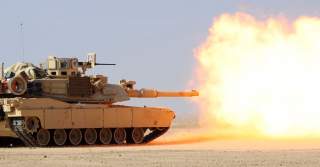 Nothing strikes fear into the hearts of America’s enemies quite like the sight of an M1 Abrams tank rumbling in their direction. It is a supremely lethal machine, equipped with a 120mm smoothbore cannon that can turn a man to mist from up to three kilometers away. And those lucky or quick enough to escape that particular fate still have the Abram’s .50 caliber and M240 machine gun turrets to contend with.

Of course, getting shot or blown up is how insurgents expect to die. Far more terrifying is the prospect of getting pounded into a flapjack, just like one of the cars in this video.

The footage was taken at the United States Army’s Grafenwoehr Training Area in Germany, where military tank crews from eight different countries recently converged for the world’s most epic monster truck rally — also known as the 2018 Strong Europe Tank Challenge.

The War Zone’s Joseph Trevithick eloquently described the annual competition as an opportunity for armor troops from different nations “to train together and build both professional and interpersonal relationships to foster ties between the participating countries.” This year’s challenge featured teams from Britain, France, Poland, Germany, Sweden, Austria, Ukraine, and the U.S. Army’s 1st Infantry Division.

Events included conventional gunnery training, an obstacles course, some sort of Iron Man-style endurance challenge for tankers. Only one evolved involved crushing a bunch of cars.