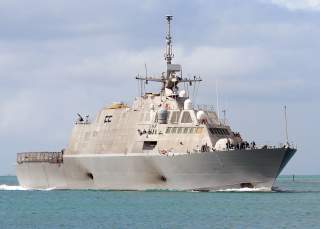 A recently released Government Accountability Office report urges Congress to slow down acquisition of a new frigate based on the troubled Littoral Combat Ship design since Congress would otherwise have to “make significant program decisions and commitments in 2017 without key cost, design and capability knowledge.”

Approval of a block buy committing the taxpayer to full production of a revamped $1.2 billion“frigate” LCS—one immune to cancellation in the event of failed operational tests—is the largest LCS decision now facing the new Department of Defense and the new Congress. The GAO report makes clear that approval would be a terrible decision for taxpayers.

If the Navy moves forward now, the GAO warns, taxpayers will be paying for 12 ships without knowing the total cost, design, or capabilities of what they’re buying. The report echoes concerns the Project on Government Oversight raised in an analysis last year and in POGO’s recommended Congressional reforms.

The rush to prove the capabilities of the LCS led to premature deployments, leaving a crew “marooned in Singapore on an open-ended deployment.” Moreover, “costs to construct the ships have more than doubled from initial expectations, with promised levels of capability unfilled,” the GAO writes.

The Congressional Budget Office estimates taxpayers could save $12 billion if the program were canceled.

Even with these changes, however, the Navy is still planning to buy a “frigate” version of the LCS that is less survivable than its previous class, and, the GAO writes, “the least capable small surface combatant option considered.”

The Navy wants Congress to approve a block of 12 planned frigates, which would conservatively cost between $9 billion and $14 billion. The problem with a block buy, however, is that it tries to tie the hands of both Congress and the Navy to cut the program or make needed modifications if the Navy and shipbuilders continue to deliver ships that don’t meet the program’s requirements.

Under a block buy, it would be more difficult to make necessary changes on the program, the GAO writes, “because of the potential for the government to have to pay more for ships.”

Normally a program of that size would be categorized as a separate major defense acquisition program, which includes a number of key oversight and accountability milestones. In this case the Navy won’t separate out the frigate program to track this key oversight information or have needed transparency through Selected Acquisition Reports.

One can only assume the Navy is trying to decrease public and Congressional criticism by making information less public.

Unfortunately this is not the first time the GAO and other independent watchdogs have urged Congress to slow down the LCS program. Throughout the history of the program the Navy established artificial deadlines on decisions to approve a production schedule that included an unnecessarily high amount of concurrency between testing and production—significantly increasing cost risks—and the decision to pursue a dual-buy strategy.

At the time, the Navy argued the use of fixed-price contracts would control costs, but the GAO found the Navy still had to pay millions of dollars to repair deficiencies, and the shipbuilders made a profit on correcting their screw-ups. Seven years later the pricing the shipbuilders proposed “have not yet been achievable.”

Disappointingly, the omnibus appropriations bill being considered this week continues to accelerate purchasing additional LCSs beyond the Navy’s request. Approving a block buy for the frigate program at this point would be doubling down on an acquisition strategy that has proven to be enormously wasteful, adding additional risk to the Navy’s already unaffordable shipbuilding plans.

Congress should heed GAO’s advice this time and reject a block buy until the Navy knows what it’s actually buying.

This story originally appeared at Project on Government Oversight here.