We 'Fought' a War in the South China Sea. The Results are Disturbing. 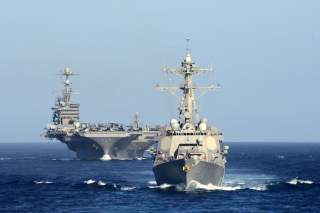 Moving at more than 40 knots, Fort Worth and Freedom begin closing the gap.Qinzhou and Changde both turn to face Fort Worth. Apparently they want to fight. I’ll oblige them. Both LCSs are under orders to engage the enemy as soon as they come close enough to fire their Griffin surface-to-surface missiles. Between the two of them, they have 30 Griffins. At four miles, Fort Worth opens up on Qinzhou with her 57-millimeter gun.Qinzhou immediately returns fire with her 76-millimeter gun, lightly damaging Fort Worth. Unfortunately, Fort Worth’s Rolling Airframe missile launcher is destroyed early on, meaning she is out of active anti-missile defenses.