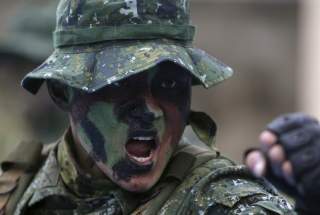 Taiwan’s Defense Ministry has just capped a biennial review of its overall defense strategy with a report made public this week, providing a glimpse of how the island plans to fend off mainland China’s saber-rattling or, if it transpires, actual aggression.

Meanwhile, the ministry has said it will discontinue media briefings on Chinese warplanes’ intrusions into Taiwan’s air defense zone, provided that no emergencies occur, now that such flyovers by the PLA Air Force have in effect become a “new normal.”

The mainland, for its part, gibed that the decision only confirmed Taiwan’s “insecurity and inability.”

Chinese pilots had circled Taiwan in 15 such air incursions and flown past the Miyako Strait seven times this year as of December 11, and in one unprecedented drill, Chinese H-6K bombers were spotted above the high seas close to the Bashi Channel off southern Taiwan, which is a vital waterway linking the South China Sea and western Pacific.

The Taiwanese military is said to be developing nimble assault ships resembling fishing boats or yachts capable of firing one missile each time against invading Chinese amphibious assault vessels. These miniaturized warships would sail from fishing ports, steered by just two or three marines wearing civilian clothing, according to United Daily News.

However, Chief of General Staff Lee Hsi-ming, who first conceived the unconventional tactic, was soon greeted with ridicule as netizens and observers questioned its feasibility, as these “sampan” warships would not be fitted with any defensive armaments, or even radar to guide them close to an enemy fleet.

What seems more plausible is Taiwan’s missile shield, underpinned by the Hsiung Feng IIE, the island’s indigenous tactical surface-to-surface cruise missiles modeled on the US Tomahawk series with a range of 600 kilometers, able to hit targets on the mainland in counterattacks, as well as a new variant of the AIM-9 Sidewinder,  versatile, infrared-homing-guided air-to-air missiles procured from the United States.

Still, Taiwan Defense Minister Feng Shih-kuan is particularly worried about a People’s Liberation Army decapitation offensive, which would target runways and hangars of key airbases rather than the island’s command and control facilities or principal officials.

As noted in the latest defense white paper, the first such document since Tsai Ing-wen was sworn in as president, the Taiwanese military will seek to boost its sea and air interception and resistance capabilities to hinder the PLA’s advancement in coastal waters and onshore, so as to win time for reinforcement from allies such as the US and Japan as well as international mediation.

The aim is to help Beijing realize it has to think twice before attempting to “recapture” the island, a defense official told Central News Agency.