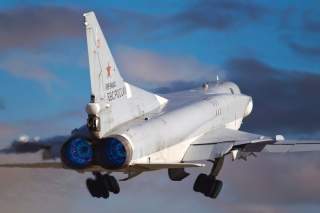 While the Kremlin makes grand pronouncements about developing a new PAK-DA stealth bomber, the Russian Air Force will likely continue to rely on its force of Tupolev Tu-95MS Bears for its long-aviation force for the foreseeable future. Eventually, the Bears will likely give way to new-build versions of the Mach 2.0 capable Tu-160 Blackjack, but the chances of the PAK-DA ever materializing are fairly remote.

“Russians like to announce new programs because it’s cheap to make aspirational announcements that may never be realized, especially in fiscally austere conditions,” Michael Kofman, a research scientist specializing in Russian military affairs at CNA Corporation, told The National Interest.

Kofman noted that Moscow’s timeline for developing the PAK-DA is wildly optimistic given current fiscal constraints, and moreover, Russia has not started developing an adequate powerplant for the new bomber. While Russian media reports have cited the continued development work on an upgraded version of the Tu-160’s Kuznetsov NK-32 afterburning turbofan for the PAK-DA, that engine is more suited for a new, more refined version of the Blackjack.

Though the quad-turboprop Tu-95 is an elderly design, the aircraft has been upgraded many times and carries modern long-range conventional and nuclear-tipped cruise missiles. The Russian bomber force showed off its capabilities over Syria—launching long-range Kh-101 cruise missiles  while supporting out of area operations. “It’s really the missiles,” Kofman said. “The Tu-95 is old, but it works, just like the B-52.”

Unlike the U.S. Air Force’s Northrop Grumman B-2 Spirit or forthcoming B-21 Long Range Strike Bomber, the Russian bombers are not designed to penetrate enemy airspace to any great extent. The bombers are designed to move into position to launch cruise missiles from stand-off distances. Part of the reason for that is even if Russian nuclear-tipped cruise missiles like the Kn-102 are stealthy, the bomber is visible enough to send a signal to a potential adversary. That’s one of the reasons a stealth bomber combined with a long-range stealth cruise missile such as the prospective Long-Range Stand-off (LRSO) missile could be considered destabilizing, Kofman said—an adversary might misconstrue the system as a decapitating strike weapon.

Eventually, Moscow will have to replace its bomber fleet. The replacement aircraft may not be the PAK-DA, Kofman said. Rather, a new Tu-160M2 variant is the most likely candidate. Using a new version of the Tu-160 airframe would save the Russians a huge amount of development money since most of the upgrades would focus on mission systems and weapons. But while a new Tu-160 will likely replace the current Blackjack and Bear fleets, it’s somewhat of a mystery as to what will take the place of the Tupolev Tu-22M3 Backfire medium bomber force.

Though the Su-34 Fullback strike version of the Sukhoi Su-27 Flanker airframe is often thought of as replacement for the Su-24 Fencer strike aircraft, Kofman said the Fullback is a much more capable aircraft with performance rivaling a medium bomber. Indeed, the Su-34—which has performed extremely well over Syria—might ultimately serve as a replacement for both the Su-24 and the Tu-22M3, Kofman said. There is simply no logical reason to develop a dedicated replacement for the Backfire when the Fullback could fill the role and be much more versatile at the same time.

The Su-34 has the long-range, sensors and a payload to perform the Backfire’s anti-ship mission, but the Fullback would likely need to utilize smaller anti-ship missiles than the massive Raduga Kh-22 (AS-4 Kitchen) fitted onto the Tu-22M3. Nonetheless, Kofman said that there is no reason a weapon such as the P-800 Oniks supersonic sea-skimmer couldn’t be carried by the Fullback. He noted that the Indian Su-30MKI will carry the Brahmos variant of the P-800—which is essentially a slightly less capable version of the same weapon. The addition of a P-800 would give the Su-34 a long-range anti-ship punch that is arguably more formidable than Kh-22—granted the Fullback could only carry one Oniks missile at a time.

The bottom line for the Russian military is that while its current bomber fleet is a fraction of the size of its Soviet-era predecessor, the Soviet Union’s investments in advanced cruise missile technology is finally paying off. Missiles such as the Kh-101 and Kh-102 likely would have entered service in the early 2000s had the Soviet Union remained intact. The new missiles afford Russia’s truncated bomber fleet a long-range precision strike capability that was until recently the sole purview of the Pentagon. Thus while the Russian bomber force of the future might utilize the same airframes as they have in decades past, those aircraft will carry ever more capable weapons as time goes on. The real question is how quickly can Moscow afford to modernize in light of Russia’s persistent economic malaise?