What America Can Learn from China’s People’s Liberation Army 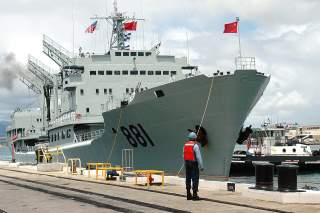 President Trump recently called for a $54 billion increase in military spending to “send a message to the world… of American strength, security, and resolve.” The U.S. defense establishment is currently grappling with how these additional funds should be spent to achieve the stated objective. Merely investing in increasing the size of our forces is ineffective. Instead, the United States must prioritize modernizing its capabilities to meet new types of threats. As the United States advances down this path, it could look towards an unlikely source for inspiration: the Chinese People’s Liberation Army (PLA). China watchers around the world continue to characterize the PLA as a “paper tiger”, but the United States could stand to learn a thing or two about force modernization from its Asian counterpart.

Do Not Underestimate the Paper Tiger

China’s last major conflict with a foreign adversary, its failed offensive in the 1979 Sino-Vietnamese war, led foreign commentators and military experts to deem the PLA a “ragtag” military that was disorganized and underfunded. Generally, the PLA lacked the technology and organizational wherewithal needed to fight even the smallest of adversaries. Today, the PLA has undergone massive military modernization efforts. They still note that the PLA is “not ready” to fight in a modern war due to technological gaps in China’s air defense, the nature of the bureaucratic and corrupt Chinese state, and its lack of combat experience.

The Chinese bureaucracy is cumbersome and beset with corruption. Yet its centralized nature has historically allowed China to rapidly adapt its fighting force to meet the shifting military-technological environment. Take, for instance, Deng Xiaoping and the first wave of PLA reform in the 1980s. The Chinese government recognized that mass alone could no longer assure its national security. Deng, therefore, shifted China’s military doctrine from a “people’s war” to a “people’s war with modern conditions.” In keeping with this doctrinal shift, the PLA rapidly deprioritized recruitment and manpower and instead focused efforts on acquiring a relatively modern arsenal. In just a few years’ time, Deng’s administration reduced the PLA’s military personnel by nearly one million and reformed China’s defense industry to focus on producing precision-guided weapons.

China shifted its military doctrine once more in 2015. This time Chinese strategists called for a return to an “active” defense, a notion reminiscent of an idea first surfaced by Mao Zedong in the early 1970s of using a large, mobilized army to protect China’s borders. Unlike Mao’s version, the modern notion of ‘active defense’ would have the PLA protect Chinese interests beyond the mainland’s borders by investing in new sea and air control technologies and reorganizing its services accordingly. The objective of these reforms is to create a force that is organizationally—and technologically—equipped to pursue joint, high-tech wars in the future multi-domain battlespace.

Pursuant to this doctrinal change, China is investing heavily in key areas of potential asymmetric technological advantage. China has, for instance, implemented a massive-scale ‘space dream’ project that aims to propel China to become a “global space power by 2030.” This effort is largely directed at interdicting U.S. space infrastructure since the U.S. battle network relies heavily on its military space constellation.

The PLA has matched high technological investments with efforts to overhaul its organizational structure. Indeed, since December 2015, the PLA has completely transformed its command structure. The PLA’s old, Soviet-style centralized command structure has been replaced with seven geographically-aligned Theatre Commands (TCs). Each Chinese TC is tasked with managing threats within its geographic purview by capitalizing on recent Chinese military-technology advances and coordinating with other TCs. China’s Eastern and Southern TCs—which oversee Taiwan operations and territorial disputes in the East and South China Seas, respectively—specialize in sea control and amphibious assault operations. From the U.S. perspective, these operations represent components of China’s broader A2/AD strategy for deterring or, if necessary, defeating U.S. power projection in East Asia. From Beijing’s vantage point, they are required steps for defending the Chinese mainland. Critically, the Eastern and Southern TCs’ train to conduct these missions by leveraging high-level coordination and technological capabilities that China lacked just a few years ago.

Lessons from the Paper Tiger

The PLA has, and will no doubt continue, to encounter a learning curve as it sustains modernizations efforts. Yet China has already demonstrated its ability to rapidly pivot its military-technological base to exploit U.S. asymmetric vulnerabilities. This explains the shrinking U.S.-China weapons capabilities gap. At the same time, the PLA has shown its ability to adapt its organization to the realities of the emerging battlespace—a critical input if its military technological advances are to inform military victory. Together, these trends explain how China has come to challenge U.S. power in the Asian-Pacific region.

China’s progress on military modernization notwithstanding, some U.S. analysts maintain that China’s military will continue to be hamstrung—and, therefore, remain a “paper tiger”—by its lack of recent combat experience. In support of this argument, U.S. analysts often reference American forces’ combat experience in the Middle East over the past fifteen years as a source of great advantage in any potential conflict with China.

It is true that U.S. forces have gained extensive experience fighting in a fluid, unconventional military landscape, but the overall utility of that experience remains in question. U.S. forces are very experienced—and effective—at targeting non-state actors for kill or capture. They have less experience with highly-trained conventional opponents. U.S. air forces likewise have a great deal of experience performing intelligence, surveillance, and reconnaissance (ISR) and strike missions in un- or limitedly-contested airspace. They have not flown large-scale operations in contested airspace in many decades. The U.S. military also has no experience fighting an adversary that aims, as the PLA does, to offset U.S. operational advantages by exploiting its vulnerabilities in the cyber, space, air, and sea domains.

U.S. forces’ experience conducting expansive counterterrorism and counterinsurgency campaigns could further hinder U.S. adaptiveness in other ways. The U.S. military bureaucracy is not famously agile. Its focus on these types of operations have already impeded efforts to adapt to the future of warfare. The training necessary to combat insurgent groups with limited weaponry greatly differs from the training necessary to operate and utilize high-end technologies against a modern adversary. The Department of Defense’s entrenched bureaucracy also makes it difficult to adapt to new types of threats that require a quicker response time. This problem is chronicled by those who discuss U.S. struggles with adapting to cyber, space, and informational warfare. It is also evident in the numbers. Reports reveal that U.S. modernization funding, which includes cyber and space capabilities, has decreased in the past five years.

Looking to the Future

The United States thus stands to gain the most from deeper inspection of the Chinese military’s ongoing modernization efforts. The PLA has shown remarkable flexibility in its efforts to evolve—technologically and organizationally—to conduct more complex, technology-intensive forms of warfare. The United States has recognized the need to do the same. To send a message of “strength, security and resolve,” and to compete with modern adversaries like the PLA, the United States must commit its additional defense funding to undertaking the organizational and technological innovations required to win an increasingly-complex threat environment.

Annie Kowalewski is a Research Intern for the Defense Strategies and Assessments Program at the Center for a New American Security and a Masters student at Georgetown University. She focuses on emerging technology, defense strategy, and U.S.-Chinese security relations.