What Boris Johnson Should Have Said About Syria 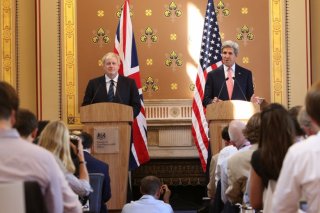 There’s obviously a lot of questions on whether Boris Johnson is a buffoon or is actually an astute political schemer and foreign policy maven, the likes of which British diplomacy was famed for centuries. He has obviously cleared up his act since he was offered the post of Her Majesty’s senior diplomat, and his actions during the live parliamentary debate over Syria were curious to watch. However, in diplomacy, it is often the case that the unsaid is more important than what’s uttered. Johnson couldn’t say a lot of things, and that’s a shame, as the world, and certainly the West, would benefit from a clear ascertaining of positions vis-à-vis Russia and Syria.

The debate started with Labour MPs, elected members of Parliament who are supposed to be the people’s representatives, arguing for intervention and no-fly zones in Aleppo in particular, and Syria broadly. Here are some examples of actual policy suggestions made by MPs: “I believe that the measured use of military capability, in the form of a no-bombing zone, must not be off the table if it is the only way of stopping the slaughter of civilians,” wrote Alison McGovern, who also burst into tears when recalling her killed colleague Jo Cox. Andrew Mitchell compared Russia to the Nazis. Liz Kendall tweeted asking the government to reconsider no-fly zones.

Boris Johnson agreed with most, saying that he is appalled at the atrocities committed by Russia but stopping short of intervention. In fact, he made it clear that to impose a NFZ would imply embarking on a shooting war with Russia, something no Western country has an appetite for. But he left it there, and didn’t go in details.

Here’s what he should have said.

The debate taking place now in Western discourse is whether or not we should intervene in Syria to save civilians caught in the crossfire. That is a flawed premise. The bigger question is whether we can, and what discernible Western interest would it serve. Let’s assume Britain and United States opt for a no-fly zone. A standard war simulation would need us to knock out Syrian forces’ C4ISR capabilities. The Syrian forces are of course no match for Western air power, so they delegate the air defense to Russian forces or Russian-backed antiair operations. The Russians then come with fighter escorts, or worse, the Russians knock down a Western bird. These are all statistical possibilities. The Russians can also deny that their forces knocked out a Western jet, and instead claim that it was done by rebels and proxies, and cloud the scenario further, as they did in Ukraine with a civilian airliner.

What would the West do in that situation? The choice in active confrontation quickly turns binary, and it would then involve either in counter-escalation or a climbdown. In a counter-escalatory spiral, any effort would entail direct attacks against possible Russian or Iranian manned antiair batteries, or worse, air-to-air combat with Russian jets. Is the West willing to go that far, especially for Syria? The other alternative scenario would result in an ignominious climbdown, which will then be a huge propaganda victory for Russia and Iran. In an escalatory spiral, the course of conflict depends on the perception and resolve of the other side as well, and there is no evidence that the British and American military, as well as the majority of the Western population, are in any way interested in any kind of brinkmanship with the Russians over Syria.

It is perhaps hard to accept or declare in public, given how our societal discourse has emphasized values, human rights and international norms since 1991, but someone needs to say it out loud soon enough. The reason is simple: the world has returned to an era of great-power rivalry, and the Syrian tragedy as well as the refugee crisis and the deaths of hundreds of thousands in Middle Eastern civil wars in Yemen as well as in Syria, do not pose a sufficient existential threat to the West to warrant an actual physical confrontation with a nuclear superpower like Russia, and therefore are not in the West’s direct geostrategic interest either.

A vast array of international-relations literature divides the world into zones, and the ones which that are existential for the military and economic interests of both the UK and the United States are the North Atlantic and the Asia-Pacific. The Middle East used to be, too, but it is an economic basket case and a demographic time bomb, not to mention the disappointment of the Arab Spring. It is also declining in importance due to the West’s energy revolution, a fact that is highlighted by increasing Western ambivalence. The Persian Gulf will still be valuable to keep trade routes open, but other than that, it is undesirable and imprudent to interfere in primarily cultural conflicts in faraway lands. And, needless to say, interfering in Syria risks other asymmetric escalations by Russia or Iranian proxies in other parts of the globe where Western interests are more prominent and immediate.

Already, as Barry Posen and John Mearsheimer have pointed out, West’s main foreign-policy blunder since the start of this century has been to push Russia solidly into the arms of China. Those two powers are not natural allies, but against the West they have a tactical alignment of sorts, and we already see other countries from Turkey to the Philippines slowly bandwagoning against the West.

As for the appeal to emotions, it is quite disconcerting to see the foreign policy of a once-proud Britain being reduced to weeping MPs in the House of Commons, the same room that once saw debates by Palmerston to Disraeli to Churchill, deciding the course of the history based on strictly British and Western interests. Johnson couldn’t obviously utter publicly such starkly realist and amoral talking points. But one can only hope he understands them and is not carried away by emotion.