What China and America Are Wondering: Is "Major War" Obsolete? 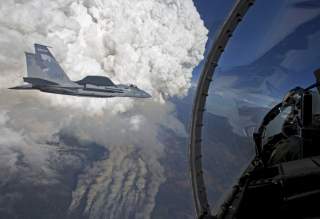 August has seen a wave of reflection on major war. It’s a question we seem to revisit every time the key anniversaries of WWI and WWII roll around, but given special significance this year by the 100th anniversary of the outbreak of WWI. Some pundits are keen to draw parallels between 1914 and 2014—though on its face it’s not apparent to me why 2014 should be more like 1914 than 2013.

Academic strategists familiar with their disciplinary history will know that the issue of whether major war is obsolete received a detailed coverage back in Survival magazine in the late 1990s. To save readers the trouble of digging through their archives, one contributor, John Mueller, argued that it was obsolete—gone the way of slavery and dueling—while others wrestled partly over how to define obsolescence and even more over how to define major war. Was the Vietnam War "major"? Was the Cold War a "war"? Michael Mandelbaum argued that perhaps major war was just a poor policy option nowadays—because of the steep rise in the costs and the thin rewards for success.

It’s intriguing that the question about the obsolescence of war is typically qualified by the adjective "major." No one seems particularly keen to claim that nasty little wars—in particular, nasty little wars in faraway places—are obsolete, perhaps because they patently aren’t. From memory, Mueller didn’t want to call those conflicts ‘wars’, though; he saw those more as “opportunistic predation.” (That’s the reason the cover of his book, The Remnants of War, features an image—from the Balkan conflict in 1991—of a thug swigging from a bottle.)

9/11 came along and sideswiped that whole debate. The nasty little wars of the 1990s didn’t stay in faraway places. A superpower got up and marched off to war—albeit a war against al Qaeda, its supporters, and all its works. Somewhere along the line the mission became conflated with a host of other problems, and Washington ended up obsessing about the Global War on Terror for longer than it probably should have done. But Washington’s behavior at least answered one question related to the Big One: did great powers still go to war? Yes. Now, the question still unanswered—unanswered since 1945 if you think major war has to be hot; unanswered since 1991, if you think major war can be cold—is whether or not major powers still go to war with each other.

Psychologist Steven Pinker has recently argued that the better angels of our nature are making us turn away from violence. I’m not wholly convinced by his argument—the better angels of our nature seem pretty militant to me, and always have been. (See Ephesians, 6:12.) But academic research from a few decades back suggests that great-power wars against each other aren’t common. Jack Levy in his research on war in the international system between 1495 and 1975 found only nine of what he would call “world wars”—wars where almost all great powers were involved. Much more commonly, he found “interstate wars”—113 of which engaged a great power. I cite those figures to underline two points. First, if world wars are rare, maybe we don’t need special explanations to say why there hasn’t been one since 1945 (hot) or 1991 (cold). Second, that definition of major war is still a problem.

Let’s put aside the academic arguments and look straight at the case that most worries. Is a great-power war between US and China possible? I think we could answer that question directly:possible, yes; likely, no. Great powers, especially nuclear-armed ones, don’t go to war with each other lightly. But sometimes wars happen. And they aren’t accidents. They’re about international order. They’re about, as Raymond Aron said, the life and death of states. And the principal reason for fighting them is that not doing so looks like a worse alternative.

Moreover, the paths to war—including rare major-power war—are not reserved solely for conventionally-armed states. Where both powers are nuclear-armed we should expect a conflict, even one at the lower rungs of the escalation ladder, to be fought with a high degree of political control, and an understanding that the objectives of the conflict are limited. Naturally, it would help if both sides shared a common understanding of where the firebreaks were between conventional and nuclear conflict, and already had in place a set of crisis-management procedures, but it’s possible that neither of those conditions might exist. (Neither would prevent a war, but both would provide a better sense of the likely escalation dynamics of a particular conflict.) Indeed, it’s because major war is possible that we retain such a keen interest in war termination. Unconstrained escalation doesn’t lead to a happy place.

Rod Lyon is a fellow at ASPI and executive editor of The Strategist where this first appeared.