This Is What Could Stop Brazil from Becoming an Energy Superpower 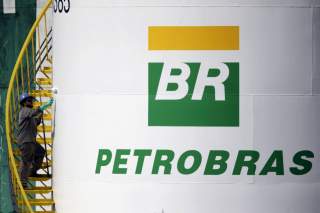 Corruption and mismanagement have stymied plans to make Brazil’s oil wealth the passport to a brighter future. With a new administration in charge, can South America’s largest economy enjoy the benefits of its natural resources or will political maneuvering throw it off course?

A state monopoly until 1997, Brazil’s oil and gas sector has grown to become the world’s tenth largest oil producer, with an estimated fourteen billion barrels of proven reserves.

While currently producing around 2.6 million barrels per day (bpd), Brazil aims to double output over the next decade on the back of discoveries such as the “monster” Tupi (Lula) and Libra deepwater oil fields.

A net exporter since 2011, Brazil enjoyed a 25 percent rise in oil exports last year to reach nearly fifty-two million tons, aided by a slump in domestic demand following the nation’s deepest recession on record that extended for two years.

More could be on the way too, with the Brazilian government eyeing some $80 billion in new investment and more than $100 billion in royalties from oil-block auctions planned through to 2019.

In October 2017, six blocks in the so-called “pre-salt” zone in the Atlantic Ocean raised $1.8 billion for government coffers, with buyers including oil majors such as BP, Exxon Mobil, Royal Dutch Shell, Statoil and Total.

“We count on the pre-salt production because the level of productivity of the fields is very high, so the cost to extract oil from the pre-salt is very low,” he told CNBC. “So we are talking about extraction costs below $7 a barrel.”

“Really, what we have to do to be on the winner’s side is to work on the cost and reduce our costs,” he added.

However, Petrobras is symbolic of Brazil’s economic potential being blighted by both internal and external factors. Currently the world’s most indebted oil company with an estimated $114 billion of debt, Petrobras has been scarred by mismanagement and battered by a corruption scandal that has claimed senior members of the business and political elite including the president, along with the slump in oil prices that have only recently started to recover.

However, after four years of scandal, Brazil and Petrobras may have turned the corner. In January, the company announced it would pay $2.95 billion to settle a class action lawsuit filed by U.S. investors, who claimed their shares lost value due to the corruption probe.

The settlement ended “extremely high uncertainty” about the company’s potential liability, JPMorgan said, saying it had expected more than $5 billion to be paid out. Fitch Ratings said the settlement was “credit neutral” for the company, since the payout could be covered by its cash level.

Petrobras has also started the process of slashing its debt burden with a series of asset sales. Chief executive Pedro Parente has stated plans to cut its debts by $21 billion this year, which if successful would bring its debt burden closer to the level of other majors such as Shell.

Lula could force Petrobras to invest in the new deepwater oil fields, or oppose the company’s current asset sales program, says Forbes contributor Kenneth Rapoza, who sees a Lula victory as a negative for Petrobras stock.

While Parente’s term runs until March 2019, the next administration could use its majority of Petrobras voting shares to appoint a new chief executive. Opinion polls show most Brazilians are opposed to privatizing the state-owned giant, which accounts for the vast majority of domestic oil production.

Under Temer’s administration, international oil firms have been given the right to operate fields in the pre-salt, among other reforms aimed at attracting foreign investment in the sector.

However, infrastructure is another challenge in exploiting the nation’s energy wealth. While shipments of crude oil from the Libra oil field are reportedly due in months, the government has no tanker ships to unload the oil, no terminals to store it, no pipelines to transport it and no refineries to process it, according to the Wall Street Journal.

“Worst of all, oil companies that do have such assets, like Brazil’s Petrobras…are staying away for fear that working with the government could expose them to compliance issues at a time when the three-year-old Car Wash probe has heightened concerns about corruption,” the financial daily says.

The newspaper blames regulations enacted by Lula that auctioned off drilling rights to firms promising the government the greatest share of “profit oil,” which in the case of Libra amounts to 42 percent of profits after exploration, development and production costs.

However, the legal framework around the production-sharing regime was only recently completed, with the report warning that Brazil risks missing out on millions of dollars in royalties should the situation not be resolved.

Nevertheless, demand for Brazil’s oil exports has remained strong, helping to increase the non-OPEC contribution to global production despite output constraint from the oil cartel.

“There is strong demand currently for Brazil’s medium-sweet crude. The United States, China, Korea, India, they are all buyers of this type of oil due to newer standards to reduce sulfur content in fuels,” S&P Global Platts analyst Esa Ramasamy told Reuters.

China overtook the United States as Brazil’s top trading partner in 2009 and has been a major buyer of Brazilian oil, with shipments increasing more than ten times the level five years prior, some of which is linked to Chinese debt repayments.

U.S. Secretary of State Rex Tillerson has warned Latin American nations, such as Brazil, against “imperial powers that seek only to benefit their own people,” arguing that “China’s offer always comes at a price.”

Washington and others hope that October’s elections do not result in a reversion to Brazil’s past methods of state control—which would likely benefit China and Russia.

In the meantime, Brazil’s budget balance remains stuck in the red, while the fallout from the Car Wash scandal overhangs the nation’s political and business elite.

The International Monetary Fund estimates Brazil’s gross domestic product will expand by 1.9 percent in 2018, which while positive remains well below the pace achieved during the resources boom.

For a nation of 207 million people, Brazil’s politicians have for too long overpromised and underdelivered, while the proceeds from its natural resources wealth remain in the hands of a few. This year’s elections could mark a turning point, but overcoming vested interests could prove the new administration’s biggest challenge.

Image: A worker paints a tank of Brazil's state-run Petrobras oil company in Brasilia, Brazil September 30, 2015. Brazil's state-run oil company Petroleo Brasileiro said on Tuesday it would raise the price of gasoline by 6 percent and diesel by 4 percent at refineries in Brazil. The change, Which will take effect on Sept. 30, comes to the firm struggles with mounting debt, falling oil prices and a giant corruption scandal. REUTERS/Ueslei Marcelino​