What to Do in a Mass Shooting: Australia Learns from the FBI 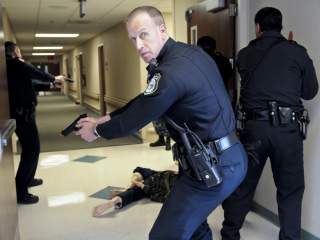 The NSW Police Force’s revised approach to violent armed offenders represents a necessary alteration of Australian police response tactics. While bladed weapons, homemade explosives and even cars have featured in jihadist plots during 2015, there has been a marked recurrence of firearm-centric attacks on western targets—San Bernadino in December, Paris in January and November, the Tunisian resort of Sousse in June, a Dallas art exhibition in May, a Copenhagen cafe in February and so on. Accordingly, a heightened response is warranted across all Australian law enforcement agencies.

The new armed offender response model for NSW police officers is derived from Federal Bureau of Investigation (FBI) active shooter countermeasures. An active shooter, according to the U.S. Government, is ‘an individual actively engaged in killing or attempting to kill people in a populated area.’ Of note, a similar definition is used in a 2013 Australian Government document, Active Shooter Guidelines for Places of Mass Gathering.

The vast majority of active shooter attacks in the U.S. have been conducted by unaffiliated nihilists—the mass casualty incidents at Sandy Hook Elementary School or the cinema in Aurora in 2012 being prominent examples. However, there are examples of active shooters with a connection to radical Islam or other ideological motivations; including a disgruntled U.S. Army officer at Fort Hood, Texas in 2009, a man who killed five US military personnel in Tennessee in July 2015, the attack on public servants in San Bernardino earlier this month and the shootings at a Planned Parenthood clinic in November.

Given the sharp increase in U.S. active shooter events since 2007, the FBI partnered with Texas State University in 2013 to deliver the Advanced Law Enforcement Rapid Response Training (ALERRT) program. The program provided a nationally standardized active shooter training syllabus for federal, state and local U.S. law enforcement agencies, and is also the basis for the revised NSW Police Force training.

Prior to ALERRT, U.S. law enforcement had already recognized the need for a rapid and decisive response following a mass shooting at Columbine High School in 1999, where the delayed deployment of tactical units provided additional time for the attackers to inflict casualties. Consequently, the universal doctrine that has developed (and been centralized in ALERRT) is that the first responding patrol officers immediately seek out an active shooter, bypassing any casualties they encounter, in order to contain and neutralize the threat with lethal force.

While there are departmental variations in the U.S.—some prefer a ‘solo officer’ entry, others mandate a minimum of three to four officers making contact in tactical formation—the core emphasis is rapid deployment of armed force in order to quickly resolve the situation. It follows, then, that the NSW Police Force will be training its general duties officers in much the same manner, which would represent a significant departure from the previous ‘cordon and wait for tactical support’ paradigm that U.S. police dispensed with long ago.

U.S. police confront different challenges to their Australian counterparts, not least in regards to the frequency of active shooter situations. The 1996 Port Arthur massacre and a shooting at Monash University in 2002 resulted in strong legislative restrictions, and the destruction of large numbers of firearms though national buyback schemes. As a consequence, Australia’s firearm homicide rate declined at an even faster rate, with multiple homicides a particular rarity.

Nevertheless, the two jihadist attacks conducted in Australia during the past rwelve months both involved firearms. The weapons were low-capacity, limited in range and slow to fire and reload, but they still inflicted fatalities. As the recent events in Paris and San Bernardino demonstrated, the right firearm in the wrong hands can inflict trauma on a tremendous scale.

Accordingly, the introduction of active shooter training by the NSW Police Force is timely; similar changes have reportedly also been flagged in Victoria and Queensland. It’s been observed, however, that a heightened response may need to be matched with increased firepower by furnishing general duties officers with rifles to augment their existing service weapons.

Providing Australian police with more assertive training and powerful firearms potentially carries significant implications for a community-focused policing model. Furthermore, it carries a risk of overzealous force being applied, as demonstrated by an incident in Ohio last year, where police responding to a false active shooter call killed a Walmart customer who was carrying a toy gun.

Nevertheless, given the recurrent use of firearms in recent jihadi attacks, it would be pertinent for all Australian law enforcement agencies—including the Australian Border Force, given its airport patrol duties—to closely observe the NSW Police Force’s revised armed offender posture.

Douglas Fry is a postgraduate student with Macquarie University’s Department of Policing, Intelligence and Counter Terrorism. This article first appeared in ASPI’s Strategist.