What Does the Future Hold for Germany's Bundeswehr after 2017? 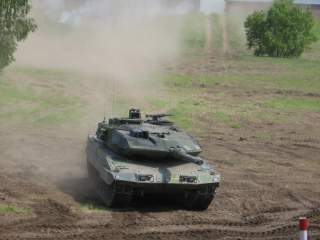 "It is our strategy that necessitates the dissolution of NATO” so stated the 1998 election platform of the German Green Party. One year later, under the supervision of the leftist Green/SPD coalition government, the German Bundeswehr launched its first combat operations since WWII under the NATO banner in Kosovo. In the years since, Germany has settled itself in an auxiliary role for its military abroad: humanitarian aid, logistical support for larger coalition operations, and capacity building for partners on the ground. But with increasing political fragmentation, featured prominently in recent state elections, and deep political division in the EU, the upcoming German federal elections raise serious questions future of German defense policy.

Recent polling and the emerging state electoral trajectory suggest that the next Bundestag will be even more divided and contentious than the current session. Under the so-called grand coalition of centrist/conservative CDU/CSU and centrist/left SPD, defense policy has been stuck in a state of limbo. While CDU defense minister, Ursula von der Leyen, has, at times, attempted to implement ambitious defense reforms, her coalition partners in the SPD have raised objections at nearly every turn.  Most prominently, the CDU/CSU proposed for the first time bolster the strength of Bundeswehr by adding some 7,000 soldiers and 3,000 civilians to the force, including a defense spending increase of $148 billion amounting to a 6.7 percent over the next seven years. Though this attempt is no doubt significant, and met with collective relief of the country’s partners, the increase still fails to amount to the two percent allocation GDP on defense spending goals established by the 2013 NATO Wales Summit.  Perhaps most importantly however, this feat was only made possible by now the eroding political clout of the CDU/CSU.

Over the last two decades, the German government’s relationship with the Bundeswehr along with its use has remained, for the most part, consistent. Since Kosovo, Germany has wielded military force on a limited capacity only in a handful of circumstances, with the majority of its operations serving an auxiliary function to international campaigns. But there is little doubt that the continuing longstanding operations and losses-in Kosovo and Afghanistan have soured Germany’s taste for military adventurism, something unlikely to change in a short period of time. To date, Germany has contributed over 100,000 soldiers and civilians to operation Resolute Support and seventeen years later German forces still remain in Kosovo – and these experiences in part, explain Germany’s non-participation in the Iraq War, and more recently the 2011 French/Italian led air-campaign against the regime of Moammar Gadhafi in Libya.  More recent uses of the Bundeswehr’s participation in the Global Anti-ISIL Coalition, including training and lethal aid assistance to Kurdistan Regional Government  (KRG), a policy which too received tremendous backlash from the SPD, Die Linke, and the Greens.  Will emerging challenges to the political status quo result in departures from this norm?  To address this, we must return to 1999.

As seen in the example of German Greens participating in the government that launched the first combat army operations abroad since the end of World War II, strong ideologies and rhetoric go only so far when entering into a governing coalition. Throughout post-war history, the German system has shown a remarkable propensity to institutionalize parties in government to political norms. The historical examples are plenty, from the cool moderatism of Helmut Schmidt to the sober realism of Steinmeier, new parties sharing in power would enact change, but often in a smaller and less revolutionary manner than previously stated in their election platforms.

The same will be true for any party (or parties) that may enter into a coalition next year to break the center hold of the grand coalitions. While certainly less powerful and holding less of a popular mandate in the coalition, the next government will certainly be lead by the weight and normalizing influence of one of the two large Volksparteien. Further, the most radical influence in terms of defense policy, the socialist/anti-establishment die Linke (“the left”), most likely will not be in consideration. As in the past, intransigence from die Linke party leadership, namely on the NATO question, will render them ineligible in the eyes of the SPD in terms of a federal coalition as in past elections. This leaves the right-wing Alternative für Deutschland (AfD) , Greens, and the liberal FDP (Free Democratic Party) as potential factors in shaping defense policy. In terms of the Greens and the FDP, both have already been in governing coalitions and have obtained a certain political maturity that Die Linke and AfD have yet to grasp. The FDP, soundly committed to Germany’s defense commitments, would be a much more supportive partner for capacity expansion of the Bundeswehr than the Greens, whose active youth wing would drive them to push hard for curtailing weapon exports and reforming NATO to be more multilateral and less interventionist.

While the meteoric rise to political prominence of the AfD throws an additional complication into this increasingly fragmented political climate. Primarily, the populist party has an array of stated Bundeswehr and NATO policy objectives that focus on reducing liabilities abroad and strengthening defense domestically. Namely, the party has stated an interest in re-instituting the Wehrpflicht, minimizing the influence of foreign institutions, namely NATO, in German defense decisions (while never explicitly calling for its dissolution or a German exit), and calling for German resources to stop being used for operations in which a clear German national interest is not present. While the increasing vitriol surrounding the AfD’s anti-refugee stance and increasing sharpness of its anti-EU rhetoric likely will keep it out of a national coalition with the CDU/CSU in a similar spirit to the SPD’s exclusion of die Linke, its rhetoric of anti-internationalism in all forms is exerting even more negative political pressure on an already quagmired Bundeswehr expansion.

With crisis after crisis at home and in the EU as a whole, it will be very unlikely that any actor in a governing coalition will want to expend the political capital necessary to make any drastic expansion/contraction of Bundeswehr or its operational role. However, while inaction may prevent necessary reform, so will it prevent any radical deconstructionist or anti-NATO pressure from being put into action as well. But to think of limitations to Bundeswehr reform this only in terms of electoral politics and coalition power would be a mistake. As it was in the past, the future of the Bundeswehr seems destined to be greatly defined by historical angst that has plagued its post-war development since 1945.

Bolton Smith is a current German and European Studies Masters Candidate at Georgetown University, He tweets at @BoltonMSmith. Gabriel White is an independent defense analyst focused on Europe and the Post-Soviet Space, He tweets at @Gabriel___White