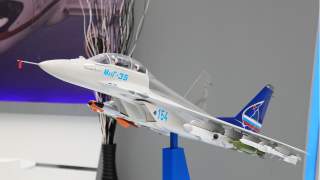 A decade after the MiG-35’s first flight, the Kremlin’s new warplane will finally begin testing with the Russian air force in January 2017, according to Russian Deputy Prime Minister Dmitry Rogozin. The fighter should be fully operational in 2020.

Russia often gives upgraded fighters new names, unlike the United States which relies on “block” numbers to distinguish variants of a single aircraft model. The MiG-35 is for most practical purposes a souped-up MiG-29K, and its fundamental characteristics are similar.

It’s also not revolutionary or — given Russia’s limited production of 37 planned MiG-35s — much of a threat to Western air forces at large. By comparison, the U.S. Air Force alone plans to buy more than 1,700 stealthy F-35 Joint Strike Fighters in the coming years.

The MiG-35 is not stealthy and it’s unlikely to see much service beyond Russia. The only interested state so far aside from Russia, Egypt, has ordered 50 MiG-35s. Plane-maker Mikoyan bet hard on selling MiG-35s to India during its latest fighter competition, but New Delhi picked the French Dassault Rafale instead.

As a result, the twin-engine MiG-35 is in a lonely place for a fighter, and that’s too bad for Mikoyan. The plane might not be innovative or particularly unique, but it is an example of what Russia’s aviation industry does best — making low-cost, evolutionary improvements to proven designs.

There’s little reason to doubt the MiG-35 is a quality fighter. For one, it retains the MiG-29’s extreme maneuverability — among the best in the world in that category.

Even better, MiG-35 incorporates lighter and modern fly-by-wire avionics, and thrust-vectoring engine nozzles shared with the MiG-29M OVT, Su-30 MKI and the U.S. F-22 Raptor, allowing it to maneuver in ways few fighters can.

The downside is that the MiG-35 sacrifices range and weight for agility. The jet has greater range than its predecessors, but is still at at the low end of the “high/low mix,” an organizing theory in which a larger number of cheap fighters balance a smaller number of expensive and more heavily armed, long-range warplanes.

On the high end of the mix is Russia’s heavier Flanker from designer Sukhoi, which is roughly equivalent to the U.S. F-15 Eagle. The MiG-29/35 loosely corresponds to the F-16. Keeping with these limitations, the MiG-29 — and thus the MiG-35 — originated as a point and area defense fighter designed to operate close to home.

In addition to a 30-millimeter cannon, the jets can carry high off-boresight missiles such as the AA-11 Archer and others on nine hardpoints, posing a lethal threat to modern Western warplanes. But again, the planned numbers are few.

The MiG-35’s most noteworthy improvement is its Zhuk-MA AESA radar, an active electronically scanned array — which is a critically important part of the jet.

Pilots in a modern aerial battle take great risks by switching on their active radars, as their signals can alert an enemy pilot before the return signal is strong enough for the radar’s operator to “see.” AESA radars effectively make it more difficult for enemy pilots to detect the initial signal. They also have greater resistance to electronic jamming.

An OLS-UEM electro-optical-infrared device serves as MiG-35’s passive search-and-track sensor, which might be able to detect emissions from U.S. stealth planes, if Russian defense trade press accounts are to be believed. The MiG-35 comes in single-seat and two-seat variants.

Another improvement is the MiG-35's smokeless RD-33MKB engines, making the plane harder to track within visual range. The jet isn’t stealthy like China’s FC-31, another new fighter featuring engines that do not emit smoke, but it’s an important upgrade for dogfighting … which the Fulcrum already excels at.

The problem is that for all its time in development, the MiG-35 has struggled to find foreign buyers apart from Egypt.

That’s a sore point for Mikoyan, as the firm’s MiG-29 is one of the world’s most common fighters. The venerable company is a giant in decline since its Soviet heyday, and the Russian air force’s meager purchase can be understood in part to help keep Mikoyan afloat.

Likewise, Russia operating a handful of MiG-35s helps promote the fighter abroad, as buyers are more likely to choose a proven design. But the company still faces tough competition from Western firms offering fighters that are just as — if not more — agile, with sensor suites Russia cannot match.

And for governments that want better multi-role capabilities on heavier airframes while still buying from Russia, there are always Sukhois.