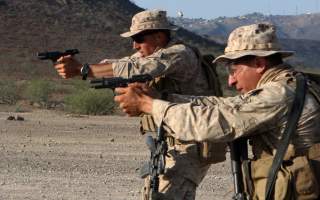 The 2nd Marine Division’s top firearms expert, Chief Warrant Officer Christian P. Wade, is back with yet another gun video — And this one’s all about pistols. Tired of all the hate dropped on the M9 Beretta, Wade’s latest edition of “Fact or Fiction” pits the battle-tested handgun against the Glock 19, which Wade says may soon begin making its way to Marines headed for Afghanistan.

To prove that M9 and Glock 19 can hold their own in a close-quarters shootout, Wade does away with the disciplined drills. There’s no slow and steady squeezes here — this demonstration is all about volume of fire:

“I’m going to do a drill where I fire three magazines as quickly as my arthritic hands can fire them,” Wade says. “No specific drill or discipline to this, if anything I just want to show you this pistol can fight.”

With that, Wade deftly unloads three magazines in a matter of seconds, transitions to fresh clips and rips through paper at point-black range with his M9, before running the same drill with the Glock 19.

“Okay, not bad. Pretty fast,” Wade says, before quipping. “I’m a little old, so it’s a little slower than maybe 20 years ago, but if you’re going to Afghanistan you can fight with this gun too.”

That’s all well and good, but as some commenters on social media noted, this is only relevant if you actually get issued a sidearm.