What Happens When America's Enemies Attack with Their Own Drones? 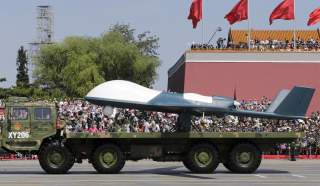 Cheap drones are a deadly problem with an expensive solution for the U.S. military.

With devastating effect, ISIS has rigged store-bought drones to drop grenades and serve as kamikaze bombers strapped with RPG warheads. In Iraq, more than a dozen have been killed and over fifty injured by these makeshift weapons.

To defend against this lethal miniature air force, the U.S. military is investing heavily in technology, exploring everything from high-powered lasers to ray guns to nets.

In its FY 2019 budget request, the Army is seeking $188.3 million for countering unmanned air systems, which comes as part of CentCom’s five-year, $332.2 million drone defense program.

The effort is aimed at rapidly testing and fielding technology that can be used by troops downrange to take out smaller drones.

In the past, American forces battling ISIS in Syria have used EC-130Hs to deploy electronic measures that disrupt the control signals piloting enemy drones.

Meanwhile, the U.S. Navy has already deployed a high-powered laser cannon capable of destroying drones aboard the USS Ponce and is fielding more. Similarly, the Army has mounted a 5kw laser atop a Stryker, and in tests last year, it successfully destroyed twelve drones.

Though effective, lasers require significant amounts of energy from a large power source like a generator. Commanders are still seeking portable solutions for forward-deployed troops like the Drone Defender—a large antenna that resembles a rifle with a backpack-mounted battery.

There is also the Drone Buster, a smaller variant which has an integrated battery. Both of these devices are signal jammers and would prevent a drone from communicating with its ground controller.

How a drone reacts when its signal is lost is dependent upon the make and model. Some ground themselves, others gain altitude in search of its controller’s signal, and higher-end models can retrace their steps and return to its pilot.

More low-tech defense systems include a drone carrying a large net that it uses to capture an enemy drone or a shoulder-fired cannon that fires a net at a drone and softly brings it to the ground with a parachute.

Some of these technologies were on display at a “Hard Kill Challenge” hosted by the Pentagon in New Mexico last year as it seeks solutions from defense contractors.

“These [drones] are really small and hard to detect, and if they swarm in groups, they can overload our ability to knock them all down,” said J. D. Johnson, the head of Raytheon’s Army programs and a retired Army general. “The threat is very resilient and well-resourced, and we have to be looking one or two moves ahead to defeat it.”

An attack on a Russian base in Syria in January reveals just how quickly this threat has evolved.

In what is believed to be the first-ever drone swarm attack, ten home-made drones rigged with explosives descended upon Russia’s Hmeimim Air Base as three other drones attacked a Russian naval facility in a nearby city.

Russian forces reported shooting down seven of the drones with anti-aircraft missiles and grounding the other six after taking control of them.

U.S. officials fear that this threat will soon present itself in future conflicts around the world.“This isn’t just an Iraq and Syria problem; it’s a regional and global problem,” said Army Lt. Gen. Michael Shields, who is helping to lead the Army’s efforts to counter drones. “These are airborne I.E.D.s.”

Underscoring the need for troops to have weapons to counter unmanned aerial systems, Peter Singer, an analyst with the New America Foundation, said militaries are “going to face this potential threat across the world, in anything from battles to doing an embassy evacuation. And that’s not good.”

“We should have seen this coming and developed a plan and equipment, not just for us, but for allied forces,” he added.

In April of last year, the Army released a planning document detailing how brigades down to individual squads should plan for and carry out counterdrone tactics.

"Small units operating in and around combat areas should assume they are being observed by the enemy and not assume they are under the umbrella (protection) of air and missile defense units," the document states. "If a unit is deployed tactically in the field and encounters UAS (Unmanned Aircraft System) threats of any category it must be assumed that the intentions of the UAS are hostile, regardless of its actions."

According to the planning document, the threat from these small drones is not limited to daylight hours. They can also operate in low light conditions, making it even more difficult to detect and dangerous to defend against.

In light of these threats, units should take precautions like concealment, cover, hardening areas on prepared sites and moving at night.

At the most basic level, individual service members must be prepared to visually spot these threats and respond.

“In order to counter this low-level air threat US forces must ensure that our lowest level sensor, the Soldier, is appropriately trained and equipped,” the document states.

While soldiers can easily be outfitted with night vision and binoculars to identify incoming drones, they are still waiting on a more effective solution to take them down than shooting at them with a rifle.