What India Could Do with the F-16: Turn It into a 'Viper' 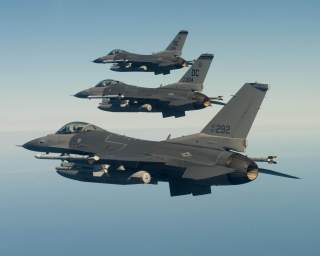 On June 19, Lockheed Martin announced in advance of a U.S. visit by Indian prime minister Narendra Modi that it had reached a joint-venture agreement with Tata Advanced Systems to move its F-16 production line to India. This deal would be contingent on the Indian Air Force selecting the F-16 to fulfill a new requirement for one hundred to 250 new single-engine fighters, which could total up to $13 to $15 billion. If the agreement does come through—the major competitor remains the Swedish JAS 39 Gripen E fighter—then India would become the exclusive producer of an advanced new Block 70 variant of the iconic fighter jet, and might also export the type to countries such as Bahrain, Colombia and Indonesia.

Entering service in 1978, the F-16 Fighting Falcon—now popularly known as the Viper—is a lightweight, short-range multirole fighter renowned for its agility. More than three thousand of the type will serve in the air forces of twenty-seven countries this year. The Viper has seen plenty of action over the decades, and is credited with shooting down seventy-six aircraft in air-to-air combat in exchange for one or two losses by one count.

While there are larger twin-engine fighter jets like the F-15 Eagle that can go faster and farther and carry heavier combat loads, the Viper is more maneuverable and can still perform the majority of combat missions just as well at a lower price. For example, by one accounting an F-16 costs $22,000 per flight hour, compared to $42,000 for the F-15.

India previously turned down the F-16 for its medium-fighter competition in favor of a small order for thirty-six French Rafale fighters. Let’s take a look at why the new proposed joint venture could mark a dramatic turnabout for the world’s second most populous nation.

This would be the first U.S.-designed jet fighter to enter Indian service.

India has a large fleet of aging and accident-prone MiG-21 and MiG-27 jet fighters that will soon be leaving service. New domestically built Tejas light fighters have consistently disappointed with their subpar performance, and thus are not being considered as a full replacement for the MiGs.

Historically, India’s fighters have come from Russia or the Soviet Union, France and the United Kingdom. These were supplemented by two domestically built jets, the Marut and Tejas. The United States was not a supplier to India during the Cold War, choosing instead to furnish advanced fighters like the F-104 Starfighter to India’s archrival, Pakistan.

Relations between New Delhi and Washington have now gone from the frigid lows of the Cold War—Nixon once menaced India with a carrier task force—to warm, following U.S. mediation of the Kargil conflict and the striking of a civilian nuclear-cooperation agreement. Today the Indian military operates U.S.-made P-8 Poseidon maritime patrol planes as well as C-17 Globemaster and C-130J Hercules transports. In fact, Tata and Lockheed are already jointly producing spare parts for the Hercules.

U.S. diplomats and arms dealers are also doing their best to maintain the much older alliance with Pakistan. However, differences over the insurgency in Afghanistan, drone strikes and state-sponsored terrorism have strained the relationship significantly.

The F-16 deal is another sign of a deepening U.S.-India alliance, which was already evident in a major logistical agreement struck in 2016 permitting the two countries to share military bases. In fact, this drift in U.S. foreign policy follows the logic of the United States’ confrontation with China. China and India have perceived one another as a strategic threat since a border war in 1962, and Beijing has developed a close alliance with Pakistan as means of “encircling” India. Conversely, Washington now sees partnership with India as a means of hedging against China’s military dominance in Asia.

This obviously brings tension to the U.S.-Pakistan relationship. However, whenever the flow of American arms to Pakistan wanes, Islamabad can count on Beijing to fill the gap: the latest fighter type to enter Pakistani service is the JF-17 Thunder, a joint Pakistani-Chinese collaboration.

The jets will be built in India, not the United States.

Washington is not the only capital where economic nationalism is in fashion: domestic production in India was as a requirement for the single-engine jet competition, as part of Modi’s Made-in-India initiative. Lockheed claims that the American F-16 production line will instead be repurposed to producing F-35s anyway, and that parts suppliers in the United States would still benefit from the deal. India would thus become the sole supplier of newly assembled F-16s, and have the right to export them as well. The proposed F-16 agreement was first green-lit under the Obama administration, though Lockheed claims that the Trump administration has been briefed and has yet to object.

India already has a similar Russian-made equivalent to the F-16.

The Indian Air Force and Navy already operate over a hundred upgraded MiG-29SMTs and navalized MiG-29Ks, respectively. These are maneuverable, lightweight short-range tactical fighters with a similar role to the F-16—though notable differences include that the MiG-29 has twin engines and was not designed from the outset as a fly-by-wire plane. Nonetheless, why would India pursue another fourth-generation light fighter?

The fact is that even the upgraded MiG-29s come with a service life of four thousand flight hours. Meanwhile, the new F-16s are being offered with twelve thousand flight hours. And India may not be eager to invest in more MiG-29s, as they have suffered from problems common to many pieces of Russian hardware—even though the aircraft came at a favorable sticker price, maintenance costs, serviceability rates and after-sale service have been poor. In particular, the MiG-29 has suffered from stress fractures in the airframe and defective engines, causing a large percentage of the fleet to be withdrawn from service.

Repeated instances of India being burned in terms of cost overruns, quality control and maintenance contracts on weapons systems, such as the T-90 tank or the aircraft carrier Admiral Gorshkov, may have spurred New Delhi to consider an alternative to its traditional arms supplier. Of course, some critics of the F-16 deal fear that it might push Russia to pursue additional arms deals with Pakistan instead.

Remember that part about the United States supplying tons of arms to Pakistan? Pakistan received its first F-16A and B Fighting Falcons in 1983—followed by an additional F-16Cs and Ds, bringing the current total to seventy-six. These F-16s constitute Pakistan’s top air-superiority fighter. Furthermore, the F-16 would likely serve as one of Pakistan’s top nuclear-strike platforms in the event of a full-scale war with India.

The Pakistani F-16s scored a number of kills against Soviet fighters over Afghanistan during the eighties, but haven’t met Indian fighters in battle, though they reportedly did face off against Indian MiG-29s during the 1999 Kargil conflict. However, the fighter pilots on both sides were not authorized to fire on each other, to avoid escalating the scope of that conflict.

At any rate, if India starts flying F-16s as well—even if they are of a different model—this will pose some obvious risks of misidentification for both sides. While it is easy to dismiss this danger by insisting that IFF technology and proper management of the battle space will keep track of which side the aircraft belong to, historically plenty of warplanes have been shot down due to misidentification by friendly forces—even when they weren’t flying the same type of plane.

On the other hand, moving the F-16 production line to India could allow New Delhi to cut off the supply of vital spare parts for Pakistani F-16s. However, in reality many F-16 components are already built by different sub-manufacturers dispersed across the globe, so it’s not clear how effective an Indian F-16 embargo would prove.

Some critics are questioning whether India will benefit from another fourth-generation fighter.

Though the F-16 has an excellent track record, and the Block 70 version would be substantially modernized, some Indian defense analysts have expressed disappointment that India is acquiring another fourth-generation fighter dating back to the 1970s. The fact that it could easily take three to five years or more for the production line to start producing F-16s also places the deal in question.

To be fair, even the U.S. Air Force will keep hundreds of F-16s in service for some time, but fourth-generation fighters are at a steep disadvantage against stealth fighters. However, fifth-generation fighters are both extremely expensive and politically difficult to obtain. India is already working on its own HAL AMCA stealth fighter, and is a partner in the Russian Pak FA T-50 stealth-fighter program—though this has been beset with major problems and delays, much to the Indian military’s dissatisfaction.

Another criticism is that India may receive little in terms of technology transfer from the F-16 deal, due to the fact that many of the more advanced components, such as the engines, computer systems and data links, are proprietary to numerous companies other than Lockheed.

So what would be new in the Indian Viper?

The upgrades for the new Block 70 model F-16s are considerable. Most importantly, the F-16 would receive a new AN/APG-83 Active Electronically Scanned Array (AESA) radar. This is a major improvement over the APG-68 radars currently in use on U.S. Air Force F-16Cs and Ds, as an AESA system can track more targets at greater range, has much higher resolution, and is harder to detect and jam in return. This is one of the more significant advantages a fourth-generation fighter can have while stalking another. The APG-83 is reportedly effective for engaging aerial targets up to seventy miles away, and can generate high-resolution images of targets on the ground.