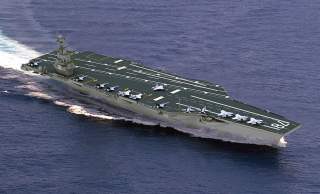 Some of the most important mechanic advancements are deep inside the ship – part of the revamped elevator system used to carry bombs, missiles and other aircraft-loaded equipment from the Ford’s bowels to the vessel’s higher decks.

Slated for springtime delivery, the aircraft carrier CVN 78 Gerald Ford has sparked much interest in its technological breakthroughs for launching and recovering aircraft – as well as new systems to cut down on the number of sailors that run the ship and run up the costs of operating the vessel.

But some of the most important mechanic advancements are deep inside the ship – part of the revamped elevator system used to carry bombs, missiles and other aircraft-loaded equipment from the Ford’s bowels to the vessel’s higher decks.

The 10 elevators have to carry up to about 200,000 pounds of weapons from the main deck magazine to the flight deck preparation area, according to Newport News shipbuilders at Hunting Ingalls Industries’ Newport News Shipbuilding unit.

That ship-climbing trek is comparable to going form the basement to the roof of an extremely large city skyscraper, carrying about 100 tons, all within a minute.

Shipbuilders wired the elevator up for more electricity using linear motors, replacing the rope-and-wheel systems that required a great deal more manpower to operate and maintain.

With the new system, shipbuilders say, the elevators can carry two times the weight as the previous system, covering the distance in about third the time. Increasing the carrying power and cutting the operating speed were key in providing the Ford with the quicker sortie rate that has been one of the ships selling points. Getting aircraft on and off the ship at a faster clip means little if the aerial platforms are not properly armed or loaded.

The move toward such systems is part of the effort to create more-electric carriers with the Ford-class vessels. Beyond the new operational systems, such as the Electromagnetic Aircraft Launch System (EMALS) that replaces the hydraulic launching system with an electromagnetic one, the ship also will rely more heavily on sensors, electronic grids and computer networks than previous carriers.

The carrier’s power need will be similar to those of a small city and the shipbuilders have developed an electric power distribution grid akin to a neighborhood substation, generating 13,800 volts, according to Newport News electrical construction developers.

By comparison, Nimitz-class carriers can only generate only about a third of that kind of voltage. Ford power pulsates through about 10 million feet of cable snaking its way through the ship, replacing pipes, valves and related machinery. Not only does that equate to less maintenance, but it also means sensors and electronic equipment can be used in some of the more dangerous or difficult-to-access places in the ships instead of sending sailors there for certain tasks. To better manage the power distribution, shipbuilders says they designed a way to retain local control through zones by limiting cable length to no more than 300 feet. Some cabling in Nimitz ships runs more than thrice that amount.

The move toward a more-electric carrier is part of an overall Navy course-change toward such technology on its warships to help cut down manpower and operational costs while making the vessels more effective. The DDG 1000 Zumwalt destroyer, for example, uses electronic netted systems to cut the crew size substantially.

The first modern ship class designed with such large-scale automated systems is the Littoral Combat Ship (LCS). When Deputy Defense Secretary Robert Work was the Navy undersecretary he wrote a white paper for the U.S. Naval War College in 2013 which noted there was top Navy “expectation that LCS would set new standards in automation.”

Neil King, the director of the Lockheed Martin LCS program, says the ships have automated “control points” to check temperatures, pressures and similar functions. “Originally, there was the ability to go out to 7,000 control points,” he says.  “Today, there are about 8.500. From the LCS family perspective, the Navy has embraced it. You can run a whole propulsion system. You can do things like transfer fuel. From different locations around the ship you can do damage control.”

But some Navy officials associated with LCS operations says the service has been slow to adopt the automated system, forcing crews to follow traditional operational concepts for the ship, sending sailors to do tasks that the sensors were supposed to do.

On the Ford, though, shipbuilders were taking advantage of the relatively long construction time for the carrier to help train sailors and the Navy to get more accustomed to some of the new technology.

Take the new elevator system. With no “schoolhouse” trainer for the new equipment, shipbuilder was using the elevator itself to train crews, according to Rolf Bartschi, Newport News vice president specifically in charge of building the Ford, to develop what’s known as “tribal knowledge.”