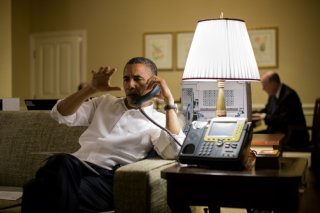 In numerous essays, Hugh White has argued that the U.S.-led Asia Pacific order, which he rightly views as a source of peace and growing prosperity over the past seventy years, is increasingly outmoded. As daily events in the South China Sea attest, the current order is increasingly contested. White fears an Asia caught in the middle of a dangerous U.S.–China rivalry that could spark conflict between the two nuclear powers.

White argues that "It is too easy to assume that the only alternative to U.S. primacy in Asia is Chinese primacy." Instead, Asian leaders need to think creatively as "there are many other possible foundations for a new Asian order, which would serve the interests of all of us, including the United States and China."

Perhaps. On the economic order, it is not difficult to envision an accommodation of U.S. and Chinese interests. China has worked within the WTO system. The Trans-Pacific Partnership and the Regional Comprehensive Economic Partnership are not incompatible and over time hold the prospect for integration.

China is not challenging the IMF. The Asian Infrastructure Investment Bank, which some feared Beijing would push as an alternative to the Bretton Woods system, appears to be on a trajectory to define its structure, governance and transparency as being compatible with the World Bank and Asian Development Bank (with whom it is already pursuing co-financing). Clearly the ‘win–win’ vision of an integrated, inclusive Asia Pacific economic order is feasible, if not already taking shape.

But even as regional economic integration continues apace, the regional security situation is marked by increasing defense budgets, confrontation and rising nationalistic territorial disputes. It is here that the competing U.S. and Chinese visions of the regional order are sharply defined with no resolution in sight. No one has yet offered a viable middle ground between the current U.S.-centric architecture and Xi Jinping’s call for a new security architecture of "Asia for Asians."

As for the present security architecture in the region, we are witnessing an evolution of the alliance structure from the Cold War ‘hub and spokes’ model to a more open architecture fostering bilateral and multilateral security cooperation with U.S. allies and partners as well as between them. Within the partnership construct, the United States, Japan and Australia are working with countries bordering the South China Sea on initiatives aimed at maritime capacity building, enhanced maritime domain awareness, joint training, exercising and port calls.

Why is this happening? In effect China’s assertive nationalist behavior, both military and diplomatic, after the global financial crisis has sparked a bandwagon effect among Asian states, pushing them toward the United States and each other. Take for example the behavior of then Chinese foreign minister Yang Jiechi at the ASEAN Regional Forum in Hanoi in 2010, after Secretary of State Hillary Clinton offered U.S. assistance to resolve South China Sea disputes. After his walk out in response to the Secretary’s presentation, Yang returned later to remind the Southeast Asian nations that "China is big. You’re small. That’s a fact."

There is a growing recognition that when China pushes against U.S. and Asian interests, the latter will push back. In effect what’s been driving the evolution of the region’s security architecture is a combination of China’s Middle Kingdom efforts to reverse 160 years of ‘humiliation’ and signals from the region that they’re not necessarily interested in that reversal.

But White’s call is for creative alternatives to the present order. So what are these alternatives? Let’s start with a 21st century Treaty of Tordesillas. This would divide the Pacific between the United States and China. But where do you draw the line? Who gets what? Does a democratic South Korea wind up under Chinese suzerainty? Is Taiwan to be the price for regional stability?

The ‘Congress of Vienna’ option, which would formalize a concert of powers, presents similar problems. Can the United States, China, Japan, Russia and South Korea agree on a status quo? Are we to expect a resolution of the Taiwan issue and Korean unification? This is doubtful. And where do the lesser actors, such as Australia and the ASEAN states, fit in? Do they simply trust the great powers to get it right?

Another model is based on the Organization for Security and Co-operation in Europe (OSCE), but for the Asia-Pacific region. For US allies this could be a leap of faith, trading alliance-based security for something toothless. In Europe, OSCE has been a useful adjunct to the North Atlantic Treaty Organization. It is employed for monitoring elections and observing ceasefires, but lacks any real enforcement power. When push comes to shove, where are the sinews of security?

Finally we have the sphere of influence model. Imagine that under President Trump the United States issues a proclamation ending all entangling alliances. The United States gets the Western Hemisphere, China gets Asia and Russia gets Eastern Europe. How would the region respond? The likely consequences are a nuclear North Korea, a nuclear South Korea and a nuclear Japan. Not exactly a sphere of stability.

The reality is that the current architecture continues to provide the region’s security and is proving flexible and adaptive to meet emerging challenges. White has a point in that no one has offered a viable answer to the question: what is an acceptable role for China in an Asia Pacific security architecture? Until disputes over Taiwan, the Korean peninsula and the South China Sea are resolved, perhaps the best that can be attained is a framework for strategic stability between the United States and China. In the meantime, to paraphrase Winston Churchill: the existing security architecture is the worst possible system — except for all the others.

Robert A. Manning is a senior fellow of the Brent Scowcroft Center for International Security at the Atlantic Council.

James Przystup is a Senior Fellow at the National Defense University’s Institute for National Security Studies. His views are his alone and do not represent the views or policies of the US government.