This Is What Napoleon Thought of Caesar 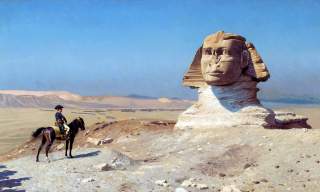 Napoleon the Great felt ancient even though was modern. As a young artillery cadet at Brienne he devoured Plutarch’s Lives and was inspired by its heroic portrait of Julius Caesar. A historian may even suspect some of Napoleon’s habits were self-conscious imitations of Caesar’s, via Plutarch: both leaders inspired men with detached self-confidence, and both habitually dictated to multiple secretaries at the same time, a rare practice. Pasquale Paoli, the great Corsican patriot, once told Napoleon: “There is nothing modern in you; you are entirely out of Plutarch.” Napoleon recalled the accusation with pride.

During his final exile on St. Helena from 1815 to 1821, Napoleon indulged his classical interests and wrote a lengthy commentary on Julius Caesar’s wars. Remarkably, it only recently appeared English. Another young cadet—the precocious American undergraduate Arshan Barzani—has finally translated Napoleon’s critique of his hero into accurate, crisp prose.

This is Napoleon’s only attempt at military biography, and his choice of subject is telling. Plutarch had inspired Napoleon with parallel lives, comparing Caesar to Alexander the Great. If Napoleon had an ancient parallel, it was Caesar. Napoleon III, who found time while ruling France to write a two-volume biography of Caesar, claimed the two each “[stamped] with the seal of their genius a new era.” For Napoleon I, however, it was less about politics and more about battles. As Napoleon repeatedly emphasizes in the commentaries, Caesar achieved unprecedented laurels in the battlefield, just as he did.

It is unsurprising that Napoleon dwells on Plutarch’s laudits of Caesar, which he compares to his own accomplishments. He is most emotionally engaged when discussing military engineering, for as Napoleon writes, “it changed little in eighteen centuries and ‘our pioneers’ tools are the same.” Caesar was, famously, the first man to lay a bridge across the Rhine in 55 BC. Plutarch merely records it was put up unexpectedly quickly, but Napoleon writes Plutarch “vaunted” this achievement, “which seemed to him a miracle” (this unjustified hyperbole is unexpected, as Napoleon was still re-reading Plutarch in exile). Napoleon then explains, in the longest commentary in the book by far, how easy it is to bridge the Rhine and how his own engineers did a far more impressive job of bridging the Danube in 1809. He calculates that his Danube bridges were “equivalent to at least ten times that of Caesar” and provides sketches of his own bridges. While this long discourse on military engineering is not uninteresting, it feels petty.

Despite his competitiveness, Napoleon is fair to Caesar. His criticism is mild: he forgives Caesar’s few lost battles as less important than his universally victorious campaigns, and accuses Caesar of cruelty to the Gauls and violating jus gentium, but barely. He is also a full-throated defender of Caesar’s dictatorship. Caesar’s authority was “totally legitimate,” Napoleon writes, as his person was “the guarantor of Rome’s supremacy.” He derides Caesar's assassins as “cowardly and impolitic” and claims Caesar was clearly not ambitious of becoming king.

The immense historic significance of the commentary lies in Napoleon’s analysis of the ways and means of Roman warfare. He approaches ancient warfare in a way no true modern writer could: as if he had fought in it. Napoleon battled on some of the same fields as Caesar, and calls Rome’s legions as a “standing regular army,” “disciplined” and “intrepid,” worthy of comparison to his own Grande Armée. While he knows the political context of ancient warfare was different—the Gauls, he says, lack “national spirit,” certainly not a problem in his time—he sees more continuity than change.

One fundamental change, however, is the advent of gunpowder projectile weapons. The Roman way of war relied on prepared field fortifications and deep formations. Modern artillery and musketry can blow these to bits; it forces soldiers to spread out and use natural terrain for protection. As a result, Napoleon claims that Caesar’s soldiers “would flee in disorder, abandoning their battlefield to these demigods armed with Jupiter’s lightning” if they faced a gunpowder army. But even this is not a “revolution in military affairs.” He emphasizes that the Romans also struggled against the Parthians, who used projectile weapons. And elsewhere, Napoleon claimed it would only take “one or two months” for an ancient general catapulted forward in time to understand the impact of gunpowder. The principles of war, he believed, are timeless.

Napoleon cannot resist a final comparison. While explaining modern battle is bloodier than ancient battle, he notes that ancient generals were “less exposed” than modern ones. “Today,” Napoleon, veteran of command in sixty battles, writes, “the commanding general is forced every day to face cannon fire… to reconnoiter, see, and command: the view’s range is not long enough for generals to be able to keep outside of the range of bullets.” He does not say this makes modern generals braver, but he clearly believes it. One wonders what Plutarch would have thought. Napoleon certainly did.

T.S. Allen is an officer in the U.S. Army. Follow him on Twitter @TS_Allen. The views presented here are those of the writer and do not necessarily represent the views of the U.S. Department of Defense and its components.