What Russia Said About NATO and Why It Matters 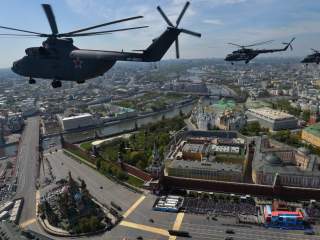 National Security Strategies (NSS) of great powers have many audiences. Vladimir Putin’s latest effort, “About the Strategy of National Security of the Russian Federation” was issued on New Year’s Eve 2015. He should hope that this forty-page publication will be read by his local citizenry because the international audience will neither be surprised nor enlightened by it. Official Russian sources argue that Putin is embarking on a “proactive” foreign policy in order to prevent Russia from being “closed off from the rest of the world.” In fact the tough tone of the document hides a very clear defensiveness along with the suggestion that Russia will not be able to compete with its newly labeled adversaries in the long-term. This alone could lead to trouble.

The Western press is highlighting that this assessment names the United States and its NATO allies as Russia’s principal security threat, with relations reaching a new low after Russia’s annexation of Crimea. However, this theme is merely a reiteration of Russia’s Military Doctrine (December 2014) and Maritime Doctrine (July 2015). It does up the ante of Obama’s NSS (2015), which labels Russia just as an aggressor in Ukraine and Crimea, without honoring Moscow as a principal threat. NATO’s most recent Summit Declaration (Wales 2014) also falls short of ‘threat’ terminology but does ‘condemn’ Russian actions in Ukraine and Crimea.

The new NSS’s discussion of the situation in Ukraine and other so-called ‘color’ revolutions is instructive in the Russian belief that not only are the intelligence services of the United States behind them, but that radical social, nationalist and religious groups are being joined by international NGOs and private citizens. Should this sweeping and comprehensive alliance exist in any members of the former Soviet Union, there probably is good reason for Russia to expect many more such ‘color’ revolutions.

Russian proof of NATO aggression is the development of its Rapid Reaction Force (RRF) and the fact that additional Western troops are being stationed on the alliance’s eastern borders. There is no mention that NATO bolstered its RRF in direct response to Russian revanchism in Crimea and Ukraine, several months after the aggressions occurred. Further the troop buildup in Poland and the Baltics is composed of rotational—not permanently-stationed—forces and their numbers are dwarfed by Russian counterparts across the border. Clearly the document authors citing “NATO’s military buildup” paid little attention to the pitiful response made by NATO members of increasing each member’s defense expenditures to at least 2 percent of GDP. Russia is more than double this percentage.

While there is lip service offered to curbing Russian nuclear potential in the NSS, the qualifications that follow make it clear that this is empty verbiage and no fundamental change from the Gerasimov Doctrine. The document offers that Russia will continue to maintain its nuclear arsenal as a deterrent and would resort to the nuclear option “only if all other non-military options failed.” Of course, Russia retains the prerogative to make this determination.

Perhaps it is in the realm of non-military affairs that Russia watchers should pay particular notice. The document acknowledges that Russian economic stability is in danger due to its “low level of economic competitiveness and its resource-dependent economy.” It notes a “lag in the development of advanced technologies, the vulnerability of the financial system. . . the economy going offshore. . . the strength of the shadow economy.” It indirectly acknowledges the effect of Western sanctions by labeling “ensuring Russia’s food independence” a strategic task and calling for increased government support for agriculture. Even looking through rose-colored glasses, one sees a faltering system refusing to enter the global economy—a system that has lost attractiveness to outside investors and cannot keep pace with even middling competitors.

Perhaps one newsworthy entry is the Russian assertion of the existence of a U.S. Military-Biological Laboratory Network located in nations bordering Russia. As to its actual existence, time will tell.

The Russian Constitution requires the publication of an NSS every six years and this one was just slightly overdue, replacing the May 2009 version. Vladimir Putin’s pronouncements and earlier strategic documents prepared the world of most of its contents and they should come as no surprise. Its veracity is comparable to most of Russian recent official announcements, but shouldn’t be greeted only with smirks. After all, it is worrisome if only Putin believes its contents.

Thomas Fedyszyn has been a professor of national security affairs at the Naval War College since retiring from the Navy in 2000. The views voiced here are his alone.