What the Pentagon Wants for Christmas: 3,400 New Drones 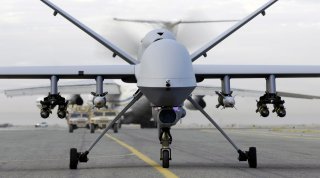 The Pentagon wants to purchase 3,447 new drones in 2019. That's quadruple the number that it requested Congress to fund in 2018, according to an analysis of the Fiscal Year 2019 Department of Defense budget request.

The Center for the Study of the Drone at Bard College, which conducted the analysis, estimates that the military is asking for $9.4 billion for drone-related programs, or about a 25 percent increase over last year's $7.5 billion request for 807 drones. About $6 billion would go for procurement of unmanned aircraft, $982 million for naval drones and $429 million for robotic ground vehicles, with the remainder allocated to developing counterdrone defenses as well as advanced concepts like swarm drones and teaming of manned and unmanned craft.

The biggest line item for drone funding is $1.4 billion for the Air Force's MQ-9 Reaper, star player in America's drone wars. Yet if Congress passes this budget, the Navy will actually get the largest share of the $9.4 billion pie, with a $3.8 billion slice for the Navy/Marines, followed by the Air Force, Army and Department of Defense.

One reason for the Navy's bonanza is the MQ-25 Stingray carrier-based drone tanker aircraft. The Stingray's prospective budget more than doubled, from $224 million to $756 million to develop two MQ-25 prototypes.

Other highlights of the budget include:

A Flock of Small Drones. "After years of budget stagnation for small unmanned aircraft programs, each of the military services is directing fresh funding streams both to 'legacy' small drones like the AeroVironment RQ-11 Raven and to new procurement projects," according to the Bard study. The request for 3,070 small drones is "the greatest quantity of drones the Pentagon has purchased in at least six years." The Marine Corps, for example, wants $2.9 million to buy a hundred portable unmanned helicopter systems that can be carried by a rifle squad.

More Counterdrone Systems. As the U.S. military worries that other nations such as Russia and Iran will use drones against American forces, the Pentagon wants to nearly double spending on counterdrone systems to $1.1 billion. This includes the Navy's ship-mounted laser, the Surface Navy Laser Weapon System, which will triple its budget to $190 million for two units.

The Continuation of Project Maven. The program that triggered protests by Google employees will continue. Project Maven, which enlisted Google to develop Artificial Intelligence to analyze drone imagery, saw its budget soar 81 percent to $100 million.

Note that the 3,447 drone figure does not include "classic" drones, the remote-controlled craft—such as the QF-16 (a converted F-16)—used for target practice. Particularly significant is a request for 1,618 Switchblade loitering munitions ("kamikaze drones"), which are carried by infantry platoons and can orbit a battlefield before plunging into their target. Add in these munition-like drones—or drone-like munitions—and the number of unmanned craft on the battlefield will really soar.

Just how pervasive drones have become is evidenced by a database maintained by The Center for the Study of the Drone, which contains 298 defense budget line items. "The diversity of unmanned air, ground, and sea systems that the DoD intends to purchase was quite striking," Dan Gettinger, who authored the Bard study, told the National Interest. "We're seeing a new generation of drones moving from the concept phase into the procurement budgets."