What the Syrian Kurds Want 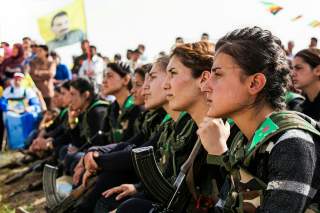 Many of us in the leadership of the Democratic Society Movement (DSM), the umbrella group for secular parties in Rojava, have been asked by policymakers, both in the United States and Europe, what the election of Donald Trump means for Syria and the Kurds.

The Syrian Kurds strongly admire the American people and they truly respect their democratic process.

The Syrian Kurds are pro-democracy and pro-America. They seek a vibrant and long-lasting relationship with the United States — and in particular, the incoming administration — which is an indispensable ally in the war against ISIS. It's also the best friend and partner for political and economic stability in the region.

On the campaign trail, Trump promised to defeat ISIS, and he praised the Kurds for aiding in that effort. He also emphasized the importance of effective reconciliation between the Kurds and Turkey, which would alleviate tensions and thereby enable America's partners in the region to focus more on combatting terrorism and restoring stability to the Middle East.

Through its actions and inactions, Turkey has proven itself to be an unreliable ally in the fight against ISIS. Many of the Turkish backed groups reportedly possess ties to Islamic terrorist groups. For example, the Nour Eddin al-Zinki battalion receives support from the United States even though it publicly maintains ties to al-Qaeda. And the Turkish government, led by Recep Tayyip Erdogan's AKP Party, has intensified, not lessened, its fight against the Kurds, even as they have reversed many of the gains being made by ISIS in northern Syria.

The most reliable and effective U.S. partner in the region is the Syrian Democratic Forces (SDF). They understand the significant geographic and cultural complexities of the battle against ISIS, and they have invested serious political and economic capital to ensure conclusive victory against radical jihadists in the region.

In Rojava, the current governing bodies have created democratic institutions that are committed to religious pluralism and respect for rule of law, while abolishing rulings that discriminate based on race, religion or sex. And consistent with progressive agendas of many liberal democracies, women in Rojava have assumed leading roles in the military and political spheres.

Critically, Kurds are not in favor of big, centralized government. Rather, they believe that federalism is best for Syria. Rojava is a good example, where diversity and coexistence is not only possible, but also encouraged.

While Kurdish troops are marching toward ISIS's self-declared capital in Al Raqqa, many leaders in Rojava have expressed concerns about the military strikes that Turkey launched in the Canton of Efrin, northwest of Syria. All of those strikes were precipitated by major U.S. delays.

In Washington, Erdogan has hired professional lobbyists to promote his anti-democratic agenda. While challenging for us, they cannot dispute the obvious progress that Kurdish forces have made against ISIS. In fact, Kurdish zones are the only places in the entire Syrian theater in which American forces have been able to remain and operate safely.

Radical Islam is a threat to the entire world. Our men and women, those fighting on the front lines, are ready and willing to unite with America against this common threat. And we look forward to strengthening and deepening our relationship with the United States — the best hope for a flourishing democracy in Rojava.

We look forward to building and growing our friendship with the incoming administration — for the sake of America, and the liberal and democratic values for which it stands.

Aldar Khalil is a Member of the Executive Committee of Democratic Society Movement.