What the U.S. Congress Fails to Realize When it Comes to TPP 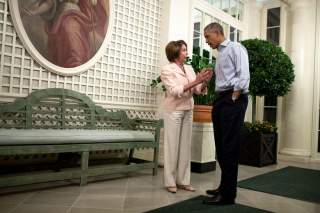 President Barack Obama finally has authority from the U.S. Congress for advancing the Trans-Pacific Partnership (TPP), a signature foreign policy of his final term in office. The TPP aims to establish a free trade zone around the Pacific Rim covering 40% of the global economy, while excluding China.

The future of the agreement had been left in doubt after the President's own party initially voted against granting him trade promotion authority, with some members now vowing to defeat the TPP itself. For Australia, the episode is thus not a story of success, but of the ongoing obstacles Congress poses to coherent American leadership in the Asia-Pacific.

U.S. officials focusing on the region repeatedly proclaim a 'rules-based order' as the necessary bulwark against China's rising power. For Obama, “strong and sustained American leadership is essential to a rules-based international order.” Australia has followed suit, with Defense Minister Kevin Andrews declaring that: “Notwithstanding China's growth, the United States will remain the single most important country in enforcing a rules-based order.”

In his 2015 State of the Union address Obama directly linked passage of the TPP with halting China's desire “to write the rules for the world's fastest-growing region.” His recognition that “we should write those rules” is nevertheless being frustrated by Congress, which has proven itself either unconvinced of the importance of the task, or unable to recognize that U.S.-centred rules are founded on a half-century of American primacy in the Asia-Pacific that is now being challenged by China.

The precarious future of the TPP follows the creation of the Chinese-led Asian Infrastructure Investment Bank (AIIB), in the face of U.S. opposition. The AIIB was established in part as a response to Congressional refusal to grant China more representative rights in global financial institutions. Likewise, the U.S. Senate continues to obstruct the UN Convention on the Law of the Sea (UNCLOS), even as America now seeks to enforce freedom of navigation rules in the South China Sea.

China's construction of artificial islands in the South China Sea is perhaps the most prominent example of the way power is being contested at the level of international legal rules. Under UNCLOS, artificial islands do not attract the same rights as a natural land feature, which would include the right to control sea and airspace out to 12 nautical miles. China has nevertheless attempted to enforce these rights against American 'freedom of navigation' operations in which US aircraft deliberately challenge purported Chinese airspace.

The American claim to be acting in defense of impartial maritime rules is weakened as long as the U.S. itself refuses to ratify UNCLOS. For Obama it is clear that “ongoing failure to ratify this Treaty undermines our national interest in a rules-based international order.” Defenders of U.S. policy claim that the U.S. already accepts rules pertinent to the South China Sea as established customary international law, while the treaty improperly creates additional obligations in relation to resource exploitation. Yet the legitimacy of taking action under a rules-based order derives from the clear acceptance of legal constraints, rather than the selective application of rules that constrain others.

Responsibility lies with Congress, with every president from George HW Bush onward supporting ratification as consistent with American global interests. Likewise, the most recent Chicago Council on Global Affairs' survey of American leaders confirmed not only universal support among Democrats but solid majority support among Republican leaders. As such, the incoherence in U.S. regional leadership can be traced back to failings specific to the U.S. Senate.

China's artificial islands have been described as 'unsinkable aircraft carriers' that allow the projection of military power far from China's mainland. It is therefore telling that U.S. Defense Secretary Ashton Carter has argued that “passing TPP is as important to me as another aircraft carrier.” Carter's phrasing was a reminder that the TPP remains necessary in geo-strategic terms if the US is to “promote a global order that reflects both our interests and our values.”

The U.S. Congress remains an unreliable partner in this strategy, beholden to competing ideological and institutional concerns. Some reservations about the TPP may well have a legitimate domestic basis, while resistance to UNCLOS probably owes more to populist fears about guarding U.S. sovereignty. In either case the alternative is increasingly conspicuous reliance on brute force to sustain the status quo. Conversely the Chinese are steadily increasing their capacity to promote interests through rules.

A future U.S. Congress may ratify UNCLOS, but possibly not until the motivation of containing China is so transparent as to destroy the benefits of doing so. Likewise, faltering on the TPP has increased incentives for China to establish its own financial order – Australia formally joined the AIIB this week.

The objective of establishing a rules-based regional order is a worthy one capable of delivering greater security and prosperity to all. But American allies can take nothing for granted while Congress acts as if setting regional rules is divorced from the underlying contest for regional power.