What Would Happen if China Dumped North Korea? 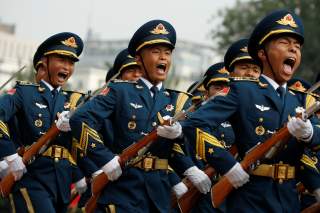 During their November meeting in Beijing, United States President Donald Trump and General Secretary Xi Jinping stated their commitment to denuclearizing North Korea. Since then, the Trump administration has been sending signals that the U.S. is serious about going into North Korea if the Kim Jong Un regime forces the situation: U.S. National Security Advisor H.R. McMaster said in an interview that the probability of war with North Korea is “increasing every day.” American F-22 and F-35 fighter jets participated in a large-scale joint military exercise with South Korea. And in a speech to a Washington think-tank, Secretary of State Rex Tillerson said that the U.S. has been talking to China about securing North Korea’s nuclear weapons in the event of regime collapse.

Meanwhile, China appears to be preparing for possible American action against North Korea. An army group from a Chinese theater command in charge of defending the Sino-North Korean boundary held a training exercise in late November. A week later, news emerged that China is constructing refugee camps across the border from North Korea. “We’ve done our best. We can neither persuade North Korea nor America,” read a Dec. 2 editorial by state mouthpiece Global Times. China can only stick to its “bottom line” and “make preparations for the worst,” the editorial continued.

China’s apparent willingness to abandon North Korea makes sense from a realist standpoint. Given North Korea’s proximity to China, Kim’s nuclear brinkmanship represents a serious threat to the stability of the Xi administration. The Chinese and North Korean leaders also have a nonexistent relationship—Xi has never met Kim, and “just does not like that man at all,” according to former U.S. ambassador to China Max Baucus. Furthermore, China’s improved ties with South Korea suggests that Xi may no longer require North Korea as a buffer state. Finally, with the Trump administration planning trade action against China, Xi may find it pragmatic to cooperate with America and hopefully secure a delay in the timing of U.S. economic sanctions.

From the ideological perspective, however, giving up North Korea may prove calamitous for the Chinese Communist Party (CCP). Mao Zedong once described the relationship between the People’s Republic of China (PRC) and the Democratic People’s Republic of Korea (DPRK) with the Chinese idiom “if the lips are gone, the teeth will be cold” (chun wang chi han). Some observers say that Mao is referring to the close ties between the two communist regimes, while others say that Mao is pointing to North Korea’s importance to China as a geographical security buffer. But Mao might actually be making bleak, existential point—the “lips and teeth” idiom is derived from a historical event during the Spring and Autumn period (771 to 476 BCE) where a powerful warring state conquers two smaller states after breaking up their alliance. In other words, Mao likely sees the PRC and the DPRK as allies with a shared fate—neither communist regime can survive if the other falls (according to CCP propaganda). Xi Jinping must be keenly aware of the nuance in Mao’s remarks and the greater implications of regime collapse in North Korea, particularly with Trump’s anti-communist stance.

Under Xi Jinping, the relationship between China and North Korea deteriorated to its lowest point since the founding of the PRC and the DPRK after the Second World War. Since taking office in 2012, Xi has yet to meet Kim Jong Un and thinks very poorly of him. U.S. officials say that Xi “openly disparaged” Kim during his meetings with Trump in Florida this April. Few Chinese officials have traveled to North Korea on diplomatic business as compared to during the Jiang Zemin and Hu Jintao years. Meanwhile, Kim has purged his leadership of pro-China officials, including his uncle and brother. He also appears to be openly challenging the Xi leadership by scheduling North Korea’s ballistic missile and nuclear testing near sensitive periods for Xi. For instance, Pyongyang’s fifth nuclear test took place days after the APEC summit in Hangzhou, while its sixth test came hours before Xi addressed a BRICS summit in Fujian.

Part of the reason for the hostilities between Xi and Kim is an ongoing factional struggle at the highest levels of the CCP. The Kim family is close to the influential faction of Jiang Zemin, the former CCP leader, and Xi’s chief rival. Kim Jong Il, the father of Kim Jong Un, met Jiang in Beijing in 2004, while Jiang’s top lieutenants like Zhou Yongkang, Zhang Dejiang, and Liu Yunshan visited Pyongyang to review military parades and partake in other high-profile activities. The Jiang faction also appears to be helping the Kims with their nuclear ambition: In 2016, the Chinese authorities arrested Ma Xiaohong, a Chinese businesswoman with ties to the Jiang faction, for supplying North Korea with materials needed for its nuclear program.

Jiang faction backing could explain why Kim Jong Un is adopting a recalcitrant attitude towards Xi Jinping and timing nuclear tests to embarrass him. On the flipside, Kim’s alliance with Jiang also explains why Xi has been sending signals that he will abandon North Korea if it goes too far. In May, the Politburo decided that North Korea’s unwillingness to heed China means that it is a “political burden” that the PRC must “relieve” itself off, according to a Hong Kong political magazine. And in September, a Global Times editorial noted that China won’t come to North Korea’s aid if Pyongyang starts a conflict with America; under a 1961 alliance treaty, China is obligated to help North Korea if it is attacked. The latest signs of China-North Korea estrangement include new Politburo Standing Committee member Wang Yang informing a Japanese politician that China and North Korea are in an antagonistic relationship, and Xi Jinping and South Korean leader Moon Jae-in pledging to improve China-South Korea bilateral ties during their Dec. 14 summit in Beijing.

There are two reasons why China will cooperate, and not clash, with America if the North Korean issue heats up and the Trump administration uses the military option.

First, Xi and Trump appear to already be in sync on reining in North Korea since their Florida meeting in April. Shorting after the meeting, Trump dispatched several aircraft carriers and other warships near the Korean Peninsula, a move which China did not object. Then in September, China supported very stringent United Nations sanctions against North Korea while the People’s Bank of China ordered Chinese banks to cease doing business with North Korea. The following month, Xi and Trump affirmed their intention to denuclearize North Korea. Both leaders have clearly developed mutual trust and understanding and can be expected to cooperate further if there are new developments in the Korean situation. Xi’s stance on North Korea and his cordial relationship with Trump differs sharply from previous Chinese leaders.

Second, present realities mean that China has no real alternative but to work with the U.S. in the event of another Korean conflict.

During the 1950 Korean War, the Mao administration had near total control over the Chinese population’s access to information about America’s military strength and the situation at the Korean front. This meant that the public was largely kept in the dark about the fight against the “American imperialists,” particularly when Chinese casualties started mounting and the tide of the battle turned against the communist alliance. The Xi leadership also strictly controls information streams, but the impossibility of completely censoring modern communication networks like the internet means that the CCP cannot hide developments at the battlefront. News of a disastrous engagement with America in a hypothetical skirmish could demoralize Chinese citizens and destabilize CCP rule.

Parents in today’s China would be hugely adverse to the idea of war on the Korean Peninsula. Most parents have only one child due to the CCP’s draconian population control policy. The prospect of losing their only child in a fight over foreign territory may inspire popular discontent against the CCP. Children may also be the reason why Chinese officials could vote down conflict with the U.S. since many officials have children pursuing higher education in America.

The People’s Liberation Army (PLA) is currently in no state to take on the U.S. military in a conventional battle. While Xi is “Americanizing” the PLA and it does possess some unconventional weaponry and tactics that could neutralize the U.S.’s technological advantage, the PLA is currently in the midst of a comprehensive military reform and is not yet ready to wage war. Xi decision to downsize the Central Military Commission at the recent 19th Party Congress could also be influenced by his being unclear about the loyalties of his senior military leadership.