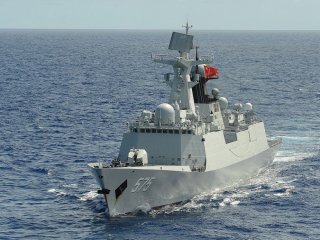 The U.S. Navy and the Australian Air Force have recently been at pains to proclaim certain activities in the South China Sea as pursuant to their right to international freedom of navigation. This new twist on familiar activities stems from China’s spectacular creation of seven new islands in this enclosed sea. The new islands undoubtedly symbolize China’s claim to exclusive privileges in this area, but they also invite a question: when was China’s Politburo persuaded that they needed a shock-and-awe event in the South China Sea to secure a positive outcome, that is, to finally suppress resistance to China’s ‘historical’ claim to the greater part of this sea?

The features in the South China Sea—predominantly located in two clusters called the Paracel Islands in the north and the Spratly Islands in the southeast—are too insignificant to have ever naturally attracted permanent inhabitants. Indeed, most of them are below water, permanently or at high tide. As such, they’ve been of keen interest to fishermen and other mariners, especially from littoral communities, as hazards to avoid or take advantage of as circumstances required. China contends that the first of its imperial dynasties—the Han dynasty, roughly 200 BC to 200 AD—took note of those features and that a mindset of ownership toward the South China Sea emerged over the centuries. In other words, China progressively concluded (or confirmed) that its right to or need for ownership of those features (and/or the sea space they inhabited) surpassed that of the other littoral communities. That sounds like a rather precious posture, even from our present vantage point, although no evidence survives from those ancient times that China imposed its claim in a manner that made other communities aware that such a claim existed.

The years haven’t been kind: the claim looks no more natural or understandable now than it would have two millennia ago. Today, China’s claim is expressed as a dashed line that made its debut in the late 1930s, slipped into circulation by the then Nationalist government. China had at last stepped away from the imperial system in 1911 but its first ‘modern’ government soon found itself in a civil war with the newly-established Chinese Communist Party, to which the Japanese invasion, starting in 1937, was added. This dashed line envelopes some 90 percent of the South China Sea and now takes away most of the exclusive economic zones granted to the other littoral states under the 1982 United Nations Convention on the Law of the Sea (UNCLOS). The status of the features within the sea in contemporary legal terms is rather obscure, and the relevance of an imperial attitude toward this body of water by the most distant of the littoral states is, at the very least, contestable.

The People’s Republic of China has nonetheless progressively intensified its campaign to secure acceptance of its claim. It has alternated between phases of inducement and coercion as well as signaling, as it became wealthier, that its capacity to bring pressure to bear was, for all practical purposes, destined to become unlimited. Beijing has had ample opportunity—even since the end of the Cold War focused more attention on those ‘regional’ issues—to assess the costs and risks of its policy settings on the South China Sea. We can infer that, for some considerable time, the occasional policy review concluded that the established instruments of policy implementation—both carrots and sticks, all of which were growing in weight and effectiveness—could be expected to suppress opposition to China’s objectives at an acceptable cost and in an acceptable timeframe.

It seems, however, that something happened that shattered political confidence in getting that timely and cost-effective outcome. Something persuaded the Politburo that the parameters of the issue needed a profound shake-up to accelerate progress toward the desired outcome. The Politburo was attracted to a spectacular blizzard of island building as the transformative development. Planning was conducted in complete secrecy. One can assume that the Politburo had to decide what island-building program was neither too small nor too big to achieve its psychological, political and security objectives, and how quickly it had to be put in place to preclude countervailing action. It would also have had to choose which features to transform into islands; decisions that would have been informed by the feasibility of transforming particular features, prospective economic rewards, military considerations stemming from the location of features occupied by other claimants and the full scope of the rights and privileges within its dashed line that China intends, eventually, to claim (but which it has steadfastly declined to elaborate on thus far).

Not long before this development, and possibly even coincident with it, the more strategically-minded within the Party leadership might have lamented that China was now so strongly associated with that claim, had committed so much political capital to it, that failure was no longer an option. It might now be clearer that China’s proximity and the sheer weight of its activities in and around the South China Sea would have delivered de facto ‘ownership’ but it was too late for this: China had at that point no choice but to press its expansive claim and make it stick.

The island-building program ramped up quickly from August 2014 and was declared complete in June 2015. The apparent objective of a political ambush was achieved. Secrecy about the Politburo decision, and preparations to implement that decision, was absolute. No one in the CCP, the legal profession, the media or the National People’s Congress breathed a word, not even to pose a question about the political wisdom, legality or cost of what the Politburo had in mind. That’s just as well, of course. If other states knew, or came to know, what the time-line for Beijing’s decisions on the program had been and then compared it with what China had been saying and doing diplomatically at the same time, the fallout could be rather damaging.

Still, the issue is poisoning the region’s political and security outlook. Not so long ago, it seemed that the majority view among analysts was that the South China Sea was essentially a peripheral issue and that, as this sank in within the ranks of regional governments, the dispute would cool. Now the pendulum is swinging the other way, with analysts thinking they may have missed something, and finding ways of visualizing the South China Sea as something closer to the fulcrum of the world in the 21st century. It’s doubtful whether either posture is helpful. But it’s becoming rather urgent that the region’s leaders determine the probable direction of a solution and begin to align the politics of the issue accordingly.

Ron Huisken is an adjunct associate professor at the Strategic & Defence Studies Centre, Australian National University. This article first appeared in the Strategist.