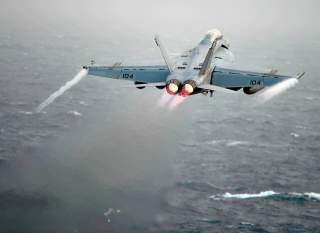 Last week, the U.S. Navy stood down its entire fleet of Boeing F/A-18E/F Super Hornets and EA-18G Growlers following an accident at Whidbey Island Naval Air Station in Washington state. As a result, the bulk of the Navy’s strike fighter force was effectively out of action for almost four days.

The accident is the latest in a series of incidents that has been plaguing the Navy’s F/A-18 series fighters. While the Super Hornet is normally an extremely reliable aircraft, over the course of the last several years the F/A-18 and EA-18G fleets have experienced a spike in problems with their cabin life-support systems—particularly the On-Board Oxygen Generation System (OBOGS). Indeed, the F/A-18 fleet experienced 297 “physiological events” from May 2010 through October 2015, according to Navy documents.

The incident on Friday—where an EA-18G from VAQ-132 experienced an “on-deck emergency”—appears to be another event where the cabin life-support systems played a role. During the accident, the Growler “was damaged and both aircrew sustained injuries and were transported by a NAS Whidbey Island SAR helicopter to Harborview Medical Center for evaluation” according to a Navy statement. After the accident, Naval Air Force immediately issued an order to suspend all F/A-18E/F and EA-18G flight operations “with exceptions made on a case-by-case basis dependent upon operational requirements.”

According to U.S. Navy sources, while the accident is still under investigation, it appears that the EA-18G suffered from severe cockpit over-pressurization. As it was described, the canopy failed after a particular safety valve—which would have relieved the pressure—failed to operate correctly. The Navy is in the process of implementing procedural fixes to address the most immediate issues in an effort ensure that such an accident doesn’t happen again.

“There is an ongoing investigation into the Mishap experienced by VAQ-132 last Friday,” Commander Jeannie Groeneveld, a spokeswoman for Naval Air Force, told the National Interest. “I can confirm that the crew was troubleshooting cabin pressurization issues when the canopy failed, damaging the aircraft and injuring the crew. It is important to let the investigation run its course to determine all causal factors of this mishap.”

In the meantime, the F/A-18 fleet restarted flight operations yesterday. Naval Air Forces Statement reads: “After Naval Air Systems Command and Boeing engineers investigated and identified several factors that likely contributed to the mishap, Naval Air Forces directed mitigation measures be implemented across the F-18 Fleet, since there are some similarities in the component designs for the affected systems in the recent Growler mishap. Once individual squadrons have briefed and incorporated these mitigation measures, they may resume normal flight operations. The mitigation measures include changes to aircraft water-wash procedures and updates to the Naval Air Training and Operating Procedures Standardization (NATOPS) ground emergency procedures. The Growler mishap is under investigation.”

Meanwhile, there does not appear to an immediate solution to the OBOGS issue. Congress is directing the Secretary of the Navy to establish an independent team to review the Navy's data on, and mitigation efforts related to, the increase in F/A-18 physiological events. The Navy will be required to submit a report to the Congress on the issue by December 1, 2017.