When Should Governments Intervene to Prevent Human Suffering in Other Countries? 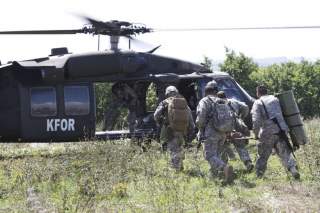 When should governments intervene to prevent human suffering in other countries and when should they exercise restraint?  Is there anything that should stand in the way of the will to save?  The Journal of Genocide Research recently published a special issue on the Nigeria-Biafra War that helps to address some of these questions.  One article by Brian McNeil, which charts the history of the American Committee to Keep Biafra Alive (ACKBA), is particularly instructive, even if the conclusions reached offer little hope for today’s beleaguered civilians in Iraq, Syria and elsewhere.

The ACKBA was a pressure group founded in the U.S. to advocate on behalf of the civilian population of Biafra—a province of Nigeria that, in the late 1960s, declared its independence from Lagos and became embroiled in a bitter civil war against the central government.  All wars lead to human suffering, but the Biafran people endured a particularly harrowing fate because the Nigerian government imposed a blockade upon the breakaway region, including the restriction of aid deliveries, in an attempt to starve the Biafrans into submission.  While estimates vary, the Biafran War resulted in the deaths of at least 1 million civilians.

In response to the slaughter, humanitarian groups formed the world over.  For its part, the ACKBA focused its efforts upon persuading the U.S. government to intervene in the conflict, believing that U.S. influence could be used to break the blockade and bring relief to the civilians of Biafra.  Nigerian sovereignty, the ACKBA argued, should not be an impediment to humanitarian relief.  In 1968, presidential hopeful Richard Nixon appeared to agree.  As McNeil notes, Nixon-the-candidate even used the label of “genocide” to describe Nigeria’s treatment of the Biafrans and backed a role for the United States in making sure that the region’s civilians were given proper access to aid—even if this meant violating the Nigerian government’s claimed sovereignty over Biafra.

In the event, however, President Nixon shied away from violating Nigerian sovereignty.  The well-worn norm of non-intervention trumped the humanitarian impulse to intervene.  As a result, the man-made famine in Biafra persisted, leaving the ACKBA scrambling to find a new political strategy.  What the ACKBA membership settled upon was a dramatic policy of urging recognition of Biafran sovereignty—that is, instead of violating Nigerian sovereignty in order to bring relief to the Biafran people, the U.S. should deny the existence of Nigerian sovereignty altogether by recognizing Biafra’s sovereign statehood.  In the short-term, Biafran statehood would open the door to much-needed aid deliveries; in the long-term, a Biafran state was the only guarantee against Biafrans being persecuted by Nigerian forces.

What this shift in approach highlights is that ACKBA, like so many humanitarian organizations today, viewed the notion of sovereignty—one of the veritable pillars of the international system—as malleable, something that should be overridden where an impediment to humanitarian objectives but embraced (in this case, for Biafra) if that would result in lives being saved.  International rules existed to serve human beings, not the other way around.  Governments should bend rules in the service of saving lives, whatever it might take.

In the event, Washington was not persuaded to recognize Biafran sovereignty.  The Biafran people waged their struggle in relative isolation until, in 1970, Nigeria won the civil war and the secessionist movement was finally suppressed.  The cost in human lives and suffering had been enormous.  While outside powers had been active in arming both sides of the civil war, the ACKBA and other concerned organizations had failed to galvanize the international community into providing meaningful humanitarian relief.  Why?

The impulse to save the people of Biafra was thwarted by some cold realities about international politics and foreign policy—all of which persist into the present day.  First, governments take state sovereignty extremely seriously (even if selectively so) and generally are reluctant to sanction the breakup of other states.  Sovereignty, in turn, stubbornly exists to buttress the control of governments over territories and populations; it is commonly the enemy of those who advocate humanitarian interventions and rarely the ally.  The abject failure of the so-called Responsibility to Protect (R2P) in the wake of the ongoing violence in Syria shows how far this remains true.

Second, Biafra shows what can happen (and what will not happen) when the leaders of powerful states are under pressure to retrench.  In his article, McNeil hints that Nixon was inclined against intervention in Biafra because he governed at a time when the U.S. public was suspicious of foreign entanglements (the Vietnam War still raging).  Some would argue Biafran lives were lost as a result.  The parallels with what is happening today in Iraq, Syria and elsewhere—and with Bill Clinton’s failure to respond to the genocide in Rwanda—are obvious.

Most of all, the Biafran episode highlights the crushing tragedy of humanitarianism as a global phenomenon.  The desire to protect human lives and human dignity is not lacking in the world but the organization of international politics is hardly set up to facilitate the timely and adequate provision of humanitarian relief.  Too many enduring power structures exist to frustrate the will to save.  In Syria, Iraqi and elsewhere, civilians in warzones continue to pay the price.