When Will the F-35 Stop Being Controversial? 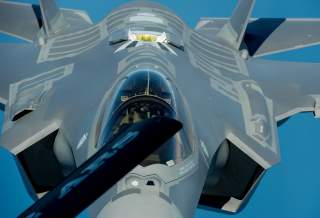 It is a question that has nagged the Pentagon for years: At what point will the F-35 Joint Strike Fighter be out of the woods?

Developing the world’s most advanced fighter jet has been a hard, expensive slog for the Department of Defense. But as the design and engineering phase of the F-35 approaches the finish line and many kinks appear to have been ironed out, the $400 billion program is bringing a new set of headaches. The Pentagon is trying to ramp up production and bring new aircraft into the military fleet at a faster pace, but a number of issues remain unresolved, such as aircraft prices and commitments from foreign buyers.

How the Defense Department gets past these challenges will determine if and when it gets to buy the desired 2,443 aircraft for the Air Force, Marine Corps and Navy. “This fiscal year will significantly shape the Joint Strike Fighter’s trajectory,” says a new report by Govini, a strategic intelligence firm that analyzes government contracting.

“The next few tranches of planes are key for locking in savings as projected unit costs continue to fall,” the report says. “Uncertainty around the short-term outlook for U.S. purchases means securing commitments from international buyers is crucial for the overall health of the program.”

The Pentagon and F-35 manufacturers are locked in tough negotiations over the next production batch, dubbed “low-rate production lot 11.”

While the U.S. government and prime contractor Lockheed Martin continue to hash out differences over pricing and fees, the F-35 program office announced Friday that it had approved a $5.6 billion “interim” contract with Lockheed for 74 aircraft as part of lot 11 — 48 F-35As for the Air Force, 18 F-35Bs for the Marine Corps and eight F-35Cs for the Navy. A final price for the entire lot 11, which is for 141 aircraft, is still being negotiated, F-35 spokesman Joe DellaVedova said in a statement.

Why the hiccup? “Complex production lines and supply chain dynamics,” DellaVedova said. “It was important to obligate funds … to continue building lot 11 aircraft prior to a final agreement on price.”

The lot 11 deal is significant because Lockheed Martin has projected that between lots 12 and 14, the unit price of the F-35 will fall to $85 million for the Air Force variant. According to Govini, the price has dropped consistently since 2007, when lot 1 aircraft cost $240 million apiece.

Govini CEO Chris Taylor told RealClearDefense that pricing negotiations have gotten tougher because Lockheed is pressing subcontractors for further cost savings. Govini estimated that Lockheed Martin’s overall share of F-35 work is 27 percent, followed by the top subcontractors Northrop Grumman and BAE Systems at 17 percent and 16 percent respectively. The engine, built by United Technologies, is treated as a separate program.

“The tension in the price negotiations could be between the government and Lockheed Martin, but also between Lockheed and the lower tier suppliers,” said Taylor. “And companies like BAE and Northrop Grumman are experienced negotiators as well,” he said. “I think the negotiation ecosystem is now reaching into the largest subcontractors.”

These hurdles are to be expected in a program this size and one that is so politically charged, said Taylor. The Govini report provides unusual details on the wide range of suppliers involved in the F-35. “This will be interesting,” he said. Unless Lockheed can squeeze savings from its nationwide network of suppliers, it will be difficult to meet the $85 million target.

Taylor insists he is optimistic about the future of the program. “The F-35 has been celebrated and maligned, back and forth, for many years,” he said. If international buyers stick with their plans and the Pentagon funds long-term buys, “our analysis shows that they can get down to $80 million per aircraft.” The Pentagon has said it intends to sign an agreement for a “block buy” for 452 aircraft “in order to lock in pricing for itself as well as international buyers for the next three years, enabling suppliers to purchase in bulk.”

The Govini report says the joint program office “telegraphed a move to this purchasing model with a $1.4 billion award for long-lead items in early 2017.”

Bloomberg News reported Monday that the total acquisition costs for F-35 are projected to rise about 7 percent to at least $406.5 billion, based on the latest Defense Department estimates. The number was $398.5 billion in 2014.

Taylor said this data point should not be cause for alarm, and the increase is likely attributable to increased numbers of aircraft being purchased and possibly to some additional development expenses.

“If costs are successfully tamed in line with announced goals from Lockheed Martin and the F-35 joint program office, the F-35 will become cost-competitive with the latest F-16s and F-18s by the early 2020s.”

Watchdog groups have called on the Defense Department to slow down payments to contractors until developmental testing is completed, a process that is expected to take two more years.

Dan Grazier, a research fellow at the Project On Government Oversight, noted that the F-35 will still need an additional $1.7 billion and another year just to finish its already 16-year-long production process. “The difficult testing is about to begin, and more problems are likely to be uncovered — meaning the program is likely going to cost even more,” said Grazier.

The most complicated part of the F-35 is the mission software. It is what controls every input the pilot receives regarding threats, targets, weapons, and the mission profile to be flown. “If and when it works, it is, together with stealth, intended to give the F-35 the biggest advantage over all current fighters,” said Grazier in a POGO blogpost.

The program office is requesting $650 million in 2018 for an “economic order quantity” toward the block buy, and projects it will save $2 billion over the life of the program. Grazier believes this would be an unwise expenditure of taxpayer dollars.

International purchases should account for half of total purchases over the three-year period covered by the block buy. The United Kingdom is the leading international partner, with plans to purchase a total of 138 F-35Bs. The Italian and Japanese host major assembly facilities that will handle significant amounts of F-35 production and maintenance in addition to Lockheed’s primary facility in Fort Worth, Texas. Canada, a formal partner in the JSF program, has deferred a decision to buy it. Germany is considering the F-35 as a potential replacement for its aging fleet of 85 Tornados, Govini notes. “A well-publicized meeting between Lockheed and German officials at the Paris Air Show was the first public signal of the country’s interest in the program.” Belgium and Finland are also potential customers.

Of the original nine partner countries – Australia, Canada, Denmark, Italy, the Netherlands, Norway, Turkey, the United Kingdom and the United States – six have received their first jets, according to the Defense Department. Israel, Japan and the Republic of Korea are not original partners but are buying F-35 through the foreign military sales program.

The U.S. Congress, meanwhile, is moving to increase funding for the program. The Armed Services Committees in both the House and Senate have authorized increased quantities for fiscal year 2018. The final result hinges on whether Democrats and Republicans can negotiate a compromise around the 2011 Budget Control Act spending caps.

Sandra Erwin is a national security and defense reporter for RealClearDefense where this first appeared. She can be reached at [email protected]. Follow Sandra on Twitter @Sandra_I_Erwin.