Where Women and Girls Are Being Used as Suicide Bombers 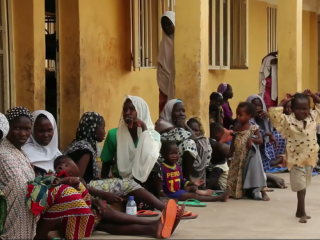 Boko Haram’s suicide bomber female recruits are objects of fascination and horror. The New York Times, citing the Long War Journal, says that Boko Haram has used at least 105 women and girls for suicide attacks since June 2014. In addition, UNICEF reports that Boko Haram has used an increased number of child suicide bombers; 75 percent of these children are young girls. As a tactic, suicide bombing is remarkably successful, killing hundreds and undermining popular confidence in the Nigerian government’s ability to provide security in areas liberated from Boko Haram.

An important article by Dionne Searcey that appeared in the New York Times on April 7 includes numerous anecdotes that may shed light on Boko Haram suicide bombers. Her reporting is based on interviews at a refugee camp in Cameroon. One of Searcey’s interlocutors describes a process of forcible conversion to Islam, followed by sophisticated terrorist training. The training is carefully sequenced, and at the upper levels is secret. However, for her, it culminated with instruction in suicide bombing and beheading. The interlocutor reported that motivation for the training includes access to food and water. Though not all of the victims are unwilling. Searcey notes that according to her interlocutor, in one group of thirty enrolled in terrorist training, seven were enthusiastic: “It was a direct path to heaven.”

The New York Times reportage is perforce anecdotal. After seven years of war, there remains remarkably little hard information about Boko Haram and its leadership, let alone about the motivation of female suicide bombers. The New York Times piece is especially important because it keeps Nigeria and the plague of suicide bombing on the public’s radar in the United States.

John Campbell is the Ralph Bunche Senior Fellow for Africa Policy Studies at the Council on Foreign Relation. This article first appeared in Africa in Transition.