While the Courts Have Ruled, China Is Not Leaving the South China Sea 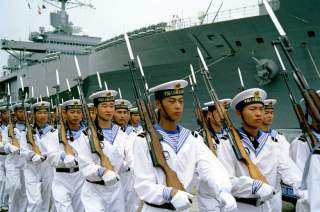 The Philippines’ sweeping victory in this week’s arbitral decision issued under the UN Convention for the Law of the Sea dealt a serious blow to China. But while the arbitral award dramatically changed the legal landscape and geography of the South China Sea in favor of the Philippines and the United States, it is important to keep in mind that even following the award’s legal conclusions, China may have the legal right to maintain a strong and even dominant presence in the Spratly Islands.

To be sure, the arbitral award is a big defeat for China’s legal claims in the region. Prior to the decision, China had a series of ambiguous but legally plausible claims to historic rights under its famous “9 Dash Line” as well as an unspecified series of exclusive economic zones covering all of the Spratly Islands.  Such unspecified claims allowed China to argue that it has “indisputable” sovereignty over all of the land features and accompanying waters in the South China Sea.  After the tribunal’s award, China’s legal rights have been reduced to sovereignty over a few “rocks” which are entitled to only a 12 nautical mile territorial sea.  China also has no legal right to exploit either the living or non-living resources in the Spratlys that lie outside of the territorial seas of the few “rocks” in the region that it either occupies or claims sovereignty over.  Thus, even if China’s claims to sovereignty over all of the land features in the South China Sea are accepted, the tribunal’s ruling limits China’s legal rights to a few isolated and disconnected territorial seas. (For a useful summary of the award, see here).

The complete rejection of China’s legal position, however, should not be read to mean that all Chinese activity in the region is illegal.  Despite the sweeping nature of the Philippines’ legal victory, the award does not actually require China to withdraw from all or even most of what it was already doing in the South China Sea.

For instance, the Chinese occupation of Scarborough Shoal is not a violation, by itself, of UNCLOS.  The tribunal found that the Scarborough Shoal is a rock, which means that if China has sovereignty, it has the right to claim a 12 nautical mile territorial sea.  While the tribunal held that China must respect “traditional fishing rights,” building an artificial island on top of Scarborough Shoal would not by itself constitute a UNCLOS violation (assuming that building such an artificial island could avoid the environmental damage the Tribunal condemned in other contexts).  Because the U.S. does not take sides on which country (the Philippines or China) has sovereignty over Scarborough Shoal, it must respect China’s sovereign claims to this “rock” and its territorial sea.

Scarborough Shoal is a good example of how the arbitral award does not directly authorize pursuit of all U.S. strategic goals in the region.  Due to the Scarborough Shoal’s proximity to the main Philippines’ island, a Chinese artificial island there would be very troubling from a military and strategic point of view.  Indeed, the U.S. government has been most aggressive in warning China not to permanently occupy Scarborough Shoal and in congressional testimony yesterday, former Director of National Intelligence Admiral Dennis Blair even recommended that the U.S. use military force against “Chinese aggression” on the Scarborough Shoal, “if necessary”.  But as a legal matter, the arbitral award does not in any way prohibit Chinese occupation on this vital strategic location.  Any U.S. military action to remove Chinese coast guard ships from the Scarborough Shoal would require an independent U.S. determination that China has no possible sovereign claim there.  That is certainly plausible, but it can find no support for this conclusion in the Tribunal’s award.

In the end, the award might not require as great a change in the status quo as it first appeared. Under the award, Taiwan may continue to occupy Taiping Island, China can stay in control of the Scarborough Shoal, and the Filipino marines can stay on Second Thomas Shoal (which falls inside the Philippines EEZ and continental shelf). The tribunal’s award, however, also allows China to maintain their artificial islands on Gaven Reef, McKennan Reef, Johnson

Reef, Cuarteron Reef, and Fiery Cross Reef since those are rocks that China might have sovereignty over and which sustain a territorial sea.

To be sure, the tribunal also found that China has built artificial islands on “low tide elevations” at Subi Reef, Hughes Reef, and Mischief Reef. But it also found that Subi Reef and Hughes Reef both lie within a territorial sea of “rocks” that China might also have sovereignty over.  Thus, it is less than clear that the Philippines has the right to expel China from those artificial islands, even if it is not clear that China has a right to be there either.

In fact, the only unequivocally illegal Chinese occupation, under the award, is the Chinese artificial island on Mischief Reef.  Because the tribunal found that the Mischief Reef is neither an island nor a rock, the Chinese artificial island is a violation of the Philippines’ right under UNCLOS to hold exclusive control over economic resources in its EEZ and on its continental shelf.

China has suffered an important setback in its global reputation from the tribunal’s unwavering rejection of its legal claims.  But while the award strengthens the position of other claimants and outside naval powers like the United States, it does not do nearly as much as it might seem at first glance.  China can (and will) stay in the South China Sea and the Spratly Islands, even if it conforms completely to the tribunal’s award.

Julian Ku is the Maurice A. Deane Distinguished Professor of Constitutional Law at Hofstra University School of Law. He is a co-founder of Opinio Juris, the leading blog on international law. You can follow him on Twitter: @JulianKu.