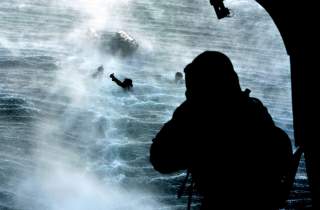 In December 2016, a team of U.S. Special Operations Forces (SOF) suffered several injuries in Northwest Iraq. Among those injured, one member was critical and quickly bleeding out. The nearest military assistance, an Army Forward Surgical Team, was well over an hour away in Erbil, Iraq. Today, that SOF member is alive, not because a helicopter was deployed to transport him to Erbil, but because he didn’t even go to Erbil.

A team of forward-deployed civilian doctors from the Global Surgical and Medical Support Group (GSMSG), located in the vicinity where the injuries occurred, saved his life by performing emergency surgery. The civilian medical team also treated the rest of the special operators with field CT/MRI imaging to check for other injuries. Those injured SOF team members were subsequently stabilized, later transported to Erbil, and flown out of country for continued medical care.

As much as we want it to be, the military cannot be all things in all places. Despite the shift toward nimble/agile SOF and small distributed intelligence teams working on a global scale over the past decade, the rest of the force structure to support those teams lags considerably.

The military apparatus has ironically yet to solve the problem of downrange medical/surgical support. The smaller and more mobile the surgical teams become, the less effective they are in their ability to care for injuries. The recent unfortunate loss of Army SOF lives in Niger is a glaring example of that. In another example, the “death-from-wounded” rate from the conflicts of Iraq and Afghanistan are no better than that of the Vietnam War.

But if looking at the trauma centers in the United States, the medicine and skills readily exist. Unfortunately, marrying those things in a sustainable and effective way with small distributed teams of operators in the field does not.

Last year, the GSMSG saw this gap and successfully matched some of the greatest trauma surgeons and orthopedic surgeons in the world with real-world casualties in the field. This isn’t a hypothetical solution; this is something that GSMSG has already done in Iraq. The GSMSG brings what the military calls “Role 3” capability (resuscitation, initial-wound surgery and postoperative treatment) to the battlefield and has helped save U.S. lives when these soldiers were too far away from the nearest military treatment facility.

GSMSG is a unique nonprofit, humanitarian, veteran-oriented organization that focuses on bringing highly qualified American physicians to austere environments and conflict zones. Ostensibly our teams rotate at a given site to treat the local population affected by conflict, treating everything from minor medical ailments to major cardiothoracic surgery, establishing a firm and dependable relationship along the way. Not surprisingly, the relative areas that we place our GSMSG teams happen to be in proximity to less overt Department of Defense operations. Once the SOF and GSMSG teams were aware of each other’s presence, it was a logical solution to be on call for emergency care, gunshot wounds to the chest, shrapnel injury to the lower extremities, etc.

In addition GSMSG also provides the same care for host-nation warfighters and civilians. This augments the capability of the mobile military surgical team by preserving supplies and resources, as well as providing a resource pool to draw from locally when demands surge.

Having already proved that this link between GSMSG and U.S. personnel downrange works, it could easily be replicated in nearly any setting. This is especially true in Africa where there is a very legitimate need for the quality of medicine and surgery that GSMSG provides. At the end of the day, the local population and hosts benefit by having some of the best physicians in the world treat thousands of patients and perform hundreds of surgeries. GSMSG rosters are filled from the national pool of U.S. physicians and medical professionals, and could cover deployments to areas like Africa, Syria and Puerto Rico—simultaneously.

Now the kicker: the entire annual cost of hiring GSMSG teams to cover eleven million square kilometers of central Africa is estimated to be less than 10 percent the annual cost of deploying a Department of Defense equivalent capability at a single site. That money would pay for multiple Role 3 capable sites, including rotary-wing aircraft.

The GSMSG could and should be used to fill the gap of appropriate medical coverage in the austere and clandestine settings. This would reduce the current burden of the military’s medical mission and allow the military to focus on battlefield emergencies, all while augmenting the current military medical teams as shock absorbers for surges in demand.

U.S. personnel deserve the most responsive and most capable medical coverage no matter where they are deployed. The GSMSG could fill that gap with medical providers of the highest caliber and at a cost-savings to the U.S. government and Department of Defense.

Aaron Epstein received his BA in Economics from Rice University, MA in Intelligence and Security Studies from Georgetown University’s School of Foreign Service, is currently completing his MD from Georgetown University’s School of Medicine and is pursuing a residency in general surgery. He has a professional history of working with the defense industry and in the national-security arena focusing on Middle East affairs. He was recently given a three-year tenure as a Fulbright Specialist in Global Healthcare Development and is the president and founder of the Global Surgical and Medical Support Group, which has more than 100 volunteer physicians and more than four hundred volunteer veterans and allied medical professionals. Since 2015, the group has completed more complex surgical procedures on the ground in Kurdistan/Northern Iraq than the U.S. and Western European governments combined during the same time period. To learn more go to www.GSMSG.org.