Why 9/11 Spared China from a Dangerous Duel with America 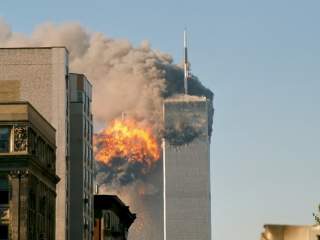 Where were you when the towers fell?

In just a few months’ time, such questions will burn up the internet and social media as America once again marks the tragedy that is 9/11—fifteen years ago this year.

I certainly know where I was—sitting at a local breakfast hub back in my hometown of Cranston, Rhode Island, with my soon to be wife—preparing to devour the loveliest stack of pancakes, when the first plane crashed into the World Trade Center. Instantly, everyone’s eyes were locked onto the TV screen. I thought at first it was an advertisement for the latest big-budget action flick. I thought to myself, “That is one heck of a plot—I need to see that.” Minutes later, too my absolute horror, I realized the events depicted weren’t Hollywood’s latest mega-disaster movie, but my generation's own Pearl Harbor.

And while we tend to think of how the events that day shaped our own lives and our country's global outlook, 9/11 clearly altered the prospects and national security fortunes of many others nations as well—and not just in the Middle East.

One nation that was impacted dramatically by the events of 9/11, and clearly aided in its rise to not only great power but near superpower status, is none other than the People’s Republic of China.

I would bet Chinese leaders also remember where they were, but more importantly what they felt on 9/11—an overwhelming sense of relieve and opportunity. In fact, Frank Ching, a prominent journalist who opened the Wall Street Journal’s Hong Kong bureau, went so far as to say that from “China’s point of view the attacks were a blessing in disguise” (more on Frank in a second).

Now, I am sure at least some of you are reading the above, scratching your heads in disgust. Who would ever think they could profit in some fashion from such despicable acts? Welcome to the great game known as international politics, where history’s pages are filled with examples of one nation's tragedy becoming another’s opportunity for power and glory. So let there be no doubt, China was impacted dramatically by the events of 9/11—and for the better.

How you ask? Take a step back for a moment. Before the shocking events of September 11, think back to the other big international event of 2001—that of the U.S.-China standoff during the Hainan Island incident. Relations between the two nations, clearly set to decline as they no longer shared a common foe in the Soviet Union, seemed destined for dark days. As Mr. Ching observed for The Diplomat magazine in 2011:

“Ten days after the crew was returned, Bush decided on a major arms deal for Taiwan. . . the biggest arms package since his father decided in 1992 to sell F-16s to Taiwan.

“China lodged a strong protest against the sale. But days later, Bush, marking his 100th day in office, said in an interview on Good Morning America that the United States would do ‘whatever it took to help Taiwan defend herself’ against China—a pledge that went even further than the Taiwan Relations Act.

“The following month, the Bush administration offered a transit visa to the president of Taiwan, Chen Shui-bian, which far exceeded the limited terms provided by the Clinton administration. . .”

And the hits just kept on coming. Ching explains:

“An article in the Washington Post on June 22, 2001, reported that ‘China’s leaders are increasingly concerned that Washington and Beijing are headed for a confrontation as China emerges as an economic and military power in Asia.’

“The article, citing both Chinese and US officials and analysts, reported concern that ‘shifts in attitudes in both nations seem to be pointing to a showdown.’

“A number of Chinese emissaries, including Assistant Foreign Minister Zhou Wenzhong, had been dispatched by Chinese President Jiang Zemin to reassure the United States that the Chinese leadership wanted to head off any potential future conflict.

“It’s against this backdrop that, on the morning of September 11, 2001, Al Qaeda terrorists hijacked four airliners and crashed them into the World Trade Center in New York and the Pentagon in Washington D.C.”

But instead of a U.S.-China period of extended tensions, America experienced the single most horrific act of terrorism in modern times which had an unforeseen of side effects—it gave China time:

“With the United States already under attack, the Bush administration’s attention was no longer focused on China as the next enemy. Instead, it redirected its attention to radical Islam and Al Qaeda’s operations around the world. The fact is, it’s not going too far to say that China owes a huge debt of gratitude to Osama bin Laden.

“After the September 11 attacks, the United States launched wars in Afghanistan and Iraq which, so far, have cost well over a trillion dollars and taken the lives of 6,000 US soldiers.

“While Washington’s attention has been focused on the Middle East and Afghanistan, China has focused its attention on developing its economy and cultivating relations with countries around the world, many of them neglected by the United States.

“From 2001 to 2010, China more than quadrupled the size of its economy. The Chinese economy is expected to overtake the United States economy in the foreseeable future and has become an engine of world growth, having contributed more than 20 percent of world GDP growth—more than that of the United States.”

And the rest as they say is history. America would once again place the Asia-Pacific as its most important area of focus, thanks to the efforts of the Obama Administration’s 2011 “pivot” or “rebalance” to the region. While it is important to note that such efforts were actually started under the Bush Administration, the Obama foreign policy seemed team seemed steadfast that Asia—and perhaps working to derail the hegemonic ambitions of China—would be its top foreign policy priority.

For now, it seems history is set to repeat itself. Beijing seems to be benefiting from the rise of ISIS and Russia’s moves in Ukraine. Washington seems to be tilting towards dealing with the crisis of the moment and not with the long-term trends that will shape the world’s most important economic region for decades to come.

Harry Kazianis (@grecianformula) is a non-resident Senior Fellow for Defense Policy at the Center for the National Interest, a non-resident Senior Fellow at the China Policy Institute as well as a fellow for National Security affairs at the Potomac Foundation.  He is the former Executive Editor of The National Interest and former Editor-In-Chief of The Diplomat. The views expressed are his own.