Why America Could Lose a War with Russia or China 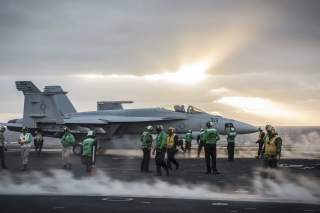 The U.S. Military possesses considerable conventional power and reach, but it currently lacks the endurance to prevail in a protracted war against a near-peer opponent. The destructiveness of modern unlimited conventional warfare will rapidly exhaust the existing base force leaving few military options for the nation.

Incremental improvements in doctrine, global basing, and force structure are all steps in the right direction, but they are fundamentally insufficient to allow the United States to prevail in a large-scale conventional war. Political and military leaders seek solutions in sterile funding debates, vociferous force size comparisons and acquisition deliberations, but then fail to address one of the elements critical to success in warfare – endurance. The ability to regenerate expended war-fighting capability is essential to maintain military staying power in a protracted war. The United States must build this kind of endurance into future force design and emphasize those military means that can be regenerated quickly and affordably to preserve military options.

The United States must transform its military and support network from the cumbersome model that defines it today into a resilient and agile information age model that combines endurance with lethality. Getting this transformation right will rely on accepting three premises. First, assume that the nature of warfare is still grounded in the destruction of lives, material, and ideas. The side which can dominate this cycle of destruction can control the pace and direction of the conflict. Then, anticipate that the enemy will continuously disrupt the digital, physical, and economic systems essential for reconstitution of fighting forces. Finally, accept that full national mobilization, of the sort that occurred in the United States during the Second World War, is unlikely to happen for the next war. By filtering conceptual thinking through these assumptions, force planners and policymakers can pursue the right mix of high-volume, low-cost options to build the high-endurance, resilient military formations the United States needs for the future.

Warfare in this century will remain a contest grounded in relentless destruction.Geographically, warfare will extend from the points of physical contact between belligerents to spaces Americans tend to regard as sanctuaries and strategic support areas. The future of interstate war will involve the conventional expressions of violence on the land, the sea, and in the air with conflict in space and cyber-space domains. Advances in the speed and range of target identification and engagement will make platforms, like aircraft carriers, submarines, and support vessels, vulnerable to a broader range of opponents.  General Mark Milley,the U.S. Army's Chief of Staff bluntly emphasizes a vision of future warfighting where the levels of attrition may rival the Second World War.

Any conflict against a determined and capable opponent will fully stress all areas of the logistics chain that underpins contemporary American military power. The intensity and pace of combat will rapidly overwhelm the logistics systems intended to reconstitute or extend the endurance for forward-deployed forces. In fact, studies like the Rand Corporation’s highly publicized report concerning a theoretical Russian invasion of the Baltics, only reinforce this idea. Combatant commanders will find themselves in a race with opponents to achieve military objectives. Supporting the forward warfighters will involve tremendous effort and expense as the battleground extends to the homeland and the military-industrial base.

For some perspective on this challenge, consider the significant logistical obstacles involved to send only one trained Armored Brigade Combat Team to Europe. The process to prepare and deploy trained personnel and serviceable equipment can take weeks and requires considerable civilian and military coordination to accomplish. For a naval perspective, the U.S. Navy is grappling with the cost and complexity involved in the process to recover and repair two recently damaged destroyers, the USS Fitzgerald and the USS McCain. Returning these ships to full use is projected to cost approximately 600 million dollars and will take over a year to complete. The deployment of forces from the homeland and the repair of damaged naval vessels are indicative of actions required in wartime to regenerate combat power and extend the endurance of war-fighting commands. Both efforts are challenging in an uncontested environment, but when opposed by a capable adversary they will become combat operations in themselves.

In any future war adversaries like China, Russia, and even North Korea will subject the United States homeland to attack. These attacks will involve the use of the cyber-electromagnetic spectrum. The use of digital tools and relative ease of accessto targets will allow adversaries to extend offensive operations into the increasingly networked cyber substrate that ties together the critical structures of modern logistics systems. These actions will disrupt the communications, financial, and transportation networks that are essential to the regeneration of all national military capabilities. Even now, in a period of relative peace, the military struggles with the complex process to manage the distribution of parts for thousands of critical systems. Imagine the challenges involved to secure and expand production for an aircraft program like the F-35 with its complex and multinational supply chain. Enemy actions in wartime will make peacetime decisions based on profit and efficiency look tragically foolish.

The strategic support structure in the homeland will also be vulnerable to lethal actions by state and non-state actors in the event of a major interstate war. The range and precision of advanced conventional weapons will make an extension of combat to the homeland more likely. Production facilities, distribution networks, and crucial resource stockpiles are vulnerable, and their protection will demand the allocation of valuable resources. No competent adversary will allow a critical shipyard to conduct a surge of construction and repairs if they possess the means to disrupt that process.

Some may dispute the likelihood of attacks on the homeland. One argument against the value of such escalation is that such actions might harden national resolve in the face of adversity. Nevertheless, public resolve will not immediately convert to military power that is sufficient to match the pace of attrition inflicted on forces overseas. The U.S. forces directly in the fight cannot rely on an immediate surge of support from the homeland to regenerate combat power.

The Chimera of Mobilization

In the United States the mass national mobilization, which harnessed the power of the nation to confront the crisis of the last century, is unlikely to occur again. The economic expansion that enabled the United States to wage an industrial era global war in the twentieth century was the product of unique economic, technological, and political circumstances. The capacity to affordably produce the sophisticated military equipment required to fight an industrial age war of attrition is not present in the withered U.S. industrial base. For example, the Congressional Budget Office's recent analysis of the U.S. Navy's 2017 shipbuilding plan identified that shortfalls in skilled labor and available shipyards in the United States hinder the acceleration of the proposed shipbuilding program.  Therefore it is likely that an adversary, operating close to their base of support could put American shipping out of action faster than the domestic base could regenerate lost capability. Adapting American manufacturing and logistics practices to support the pressing demands of a major war is possible, but it requires political decisions on force structure and funding made years in advance.

Fortunately, some military and political leaders are seriously considering the ability of the domestic manufacturing base to support the nation. In July 2017, the president signed a Presidential Executive Order directing an assessment of the industrial base as it relates to defense manufacturing and supply chain security. The executive order is some of the most recent evidence that concerns about the linkage between national security and the industrial base are gaining emphasis among some policymakers. The findings are likely to confirm the idea that in a crisis any significant national mobilization would likely take years to implement fully. However, any capable opponent will fight to remove options and exhaust the force before national mobilization can provide relief. However, the accelerated adoption of emerging capabilities can provide the force with additional possibilities to gain and maintain the initiative on future battlefields.

The Joint Force that evolves in the next decade must be versatile, lethal, and able endure the shocks of sustained combat. The country must be able to regenerate expended capabilities quickly and at a bearable cost. Continuing to emphasize delicate and extravagantly expensive low-volume systems is self-defeating. Instead, the Department of Defense must accelerate the exploration of the capabilities and promise provided by the convergence of robotics, artificial intelligence, and advanced computing. Some of these technologies are in the field now, and the military, in coordination with private industry is steadily exploring the utility of advanced unmanned platforms as surveillance, exploration, and war-fighting systems. The imperative, across domains, must be developing capabilities that enable warfighters to overwhelm, exploit, and outlast adversaries.