This Is Why America Needs Tons of Nuclear Weapons 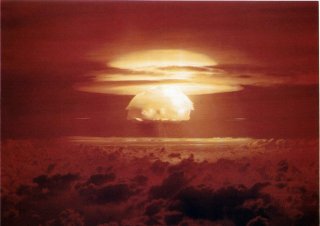 There is a widely acknowledged gap between policy making and academic theory. As Paul Nitze once observed:

Most of what has been written and taught under the heading of “political science”by Americans since World War II has been contrary to experience and common sense. It has also been of limited value, if not counterproductive, as a guide to the actual conduct of policy.

This gap is especially pronounced in the realm of nuclear strategy. In academia, nuclear scholars have consistently argued that nuclear-armed states only need a limited number of warheads to maintain a secure second-strike capability, and building larger arsenals is of no utility. During the Cold War, however, the Soviet Union and United States built tens of thousands of weapons, and Moscow and Washington still maintain arsenals well in excess of what academics believe is necessary. In seeking to explain this gap, most scholars have fallen back on the argument that the superpowers are simply acting “illogical” when it comes to nuclear strategy.

Matthew Kroenig seeks to bridge this gap in his new book, The Logic of American Strategy: Why Strategic Superiority Matters. A professor at Georgetown University, Kroenig often takes controversial positions and challenges the conventional wisdom, especially the conventional wisdom in the Ivory Tower. In doing so, he makes his points so persuasively that even his staunchest critics are forced to grapple with his arguments.

The Logic of American Strategy is arguably Kroenig’s most ambitious project yet. The book challenges the conventional wisdom on U.S. nuclear strategy but does so from a position firmly grounded in the work that came before it. Thus, Kroenig accepts that a secure second-strike capability is sufficient for deterring most conventional attacks, but “argues that military nuclear advantages above and beyond a secure, second-strike capability can contribute to a state's national security goals.” Most notably, his “superiority-brinkmanship synthesis theory” contends that by building a robust nuclear posture—“with capabilities designed to limit damage in the event of nuclear war”—the United States enhances its ability to take risks in nuclear crises. That is because America has counterforce capabilities—i.e., those that can take out an adversary’s nuclear arsenal—that reduce the level of destruction it would suffer in a nuclear attack.

Again, this is rooted in the pioneering work of intellectual giants like Thomas Schelling. As Schelling demonstrated, in a world characterized by Mutually Assured Destruction, countries are less likely to fight wars. In their place, countries compete through brinkmanship, where each side takes increasingly risky actions in an effort to get the other side to back down. Brinkmanship is a battle of resolve, and most theorists believe that whichever side has greater interests at stake will demonstrate more resolve. That is, they will be willing to take the most risky actions in order to achieve their ends. This presents a paradox for the United States. As the only country that provides extended deterrence over its allies in theatres like Europe and Asia, it almost always has less at stake than adversaries like Russia and China. Thus, if resolve is simply a matter of which side has greater stakes at risk, America should lose every time.

Why doesn’t this happen, then? Kroenig argues that resolve is about more than what interests are at stake. Similar to Daryl Press's theory on credibility, Kroenig argues that resolve is better calculated as a combination of the stakes involved and each state’s capabilities. By building a robust nuclear force, America’s losses in a nuclear war—though extraordinary—will be less than its adversaries. This makes U.S. leaders more willing to gamble in nuclear crises than they otherwise would be. As Kroenig puts it:

Leaders in nuclear superior states still badly want to avoid a nuclear exchange, but because the costs of a nuclear exchange are relatively lower, we should expect that they will be willing, on average, to hazard a higher risk of disaster than their nuclear inferior opponents, making them more likely to ultimately win nuclear crises.

To demonstrate this logic, Kroenig does what few modern nuclear scholars bother doing—namely, mapping out how a nuclear war might unfold. While this was common practice during the Cold War—and another area where Kroenig is building on the work of prior nuclear scholars—few contemporaries are comfortable with thinking the unthinkable (at least in the public domain). For them, distinctions fail to matter when one’s talking about something as destructive as nuclear warfare. Kroenig does not deny that any nuclear war would be horrific, but contends that there are meaningful differences in scale. For instance, the United States would undeniably suffer less from a Chinese nuclear first strike than a Russian one. “To argue otherwise,” Kroenig writes, “one would have to maintain that the destruction of 86 US cities, including Honolulu, New Orleans, and Pittsburgh, does not matter. One would also have to argue that the loss of 20 million American lives is inconsequential. Such a position is untenable.”

In what is likely the most controversial chapter of the book, Kroenig shows the enormous differences in lives lost when the United States has a robust nuclear force that is capable of carrying out counterforce strikes. Consider the differences between a Russian first and second strike under current conditions. In a first strike, Moscow could destroy 131 American cities with an estimated 70 million casualties (assuming it was also trying to reduce America’s ability to retaliate). If Russia’s arsenal had already been targeted by a U.S. counterforce attack, its second strike would hit twelve cities and cause 28 million casualties. These numbers would be a lot different if the United States implemented unilateral nuclear reductions, as some has advocated. In one of the most interesting points in the book, Kroenig points out that if the United States eliminated its ICBM force—as many now advocate—it would free up more Russian nuclear warheads to target U.S. cities. In fact, by Kroenig’s calculations, there would be more American casualties in a Russian second strike with a reduced U.S. arsenal than in a first strike under current conditions. Instead of the 70 million casualties in a first strike under current conditions, a Russian second strike with a reduced U.S. arsenal would cause 82 million casualties. That’s because more of Moscow’s arsenal would survive a first strike and also it wouldn’t have to devote many warheads to U.S. nuclear targets like ICBMs.

Even if logically sound, social science theories count for little if they don’t explain the world. In this vein, Kroenig devotes a chapter to conducting qualitative and quantitative tests of his superiority-brinkmanship synthesis theory. The quantitative analysis finds that “nuclear superior states are over ten times more likely than nuclear inferior states to achieve their basic goals in international crises.” Interestingly, he finds that nuclear superior states have never faced compellent threats. “Nuclear superiority deter compellence,” Kroenig writes. Many of these findings depend on how one interprets and codes events. After all, Todd S. Sechser and Matthew Fuhrmann’s recent book found that nuclear weapons are poor tools for coercion. There is little doubt that some U.S. presidents believed that nuclear superiority—or a lack therefore of—was hugely important. Richard Nixon and Henry Kissinger often bemoaned how the Soviet Union achieving nuclear parity constrained their freedom of action. Nonetheless, they still attempted nuclear coercion and it’s unclear whether their assessments were correct.

After testing his theory, Kroenig provides rebuttals to what he believes critics will say about the dangers and costs of striving for nuclear superiority. Many of these will be controversial but, as usual, persuasive enough that they will have to be engaged by critics. One issue that could have received more attention in the book is how emerging military technologies could impact the relevancy of nuclear superiority. For instance, advances in the accuracy of missiles, the development of hypersonics and perhaps even cyber weapons could make effective nonnuclear counterforce strikes more effective. At the very least, these will have to be part of the strategic balance leaders consider in assessing their own and adversaries’ capabilities.

In final analysis, The Logic of American Nuclear Strategy makes an important contribution to the academic literature while also being highly relevant and extremely readable for policymakers and the general public. In this way, Kroenig’s work itself embodies bridging the academic and policy worlds.