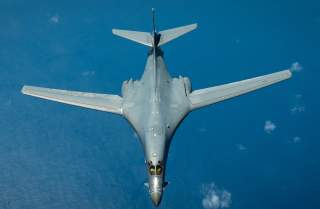 The Trump Administration seems to believe that it can still achieve the goal of a denuclearized North Korea without resorting to a full-scale war.  But while the United States hopes to achieve that goal diplomatically, war is a distinct possibility if Pyongyang does not cooperate. But that being said, the Kim regime has very little reason to cooperate with Washington.

“The effort to denuclearize the Korean Peninsula is one that has been diplomatically led and with an increased emphasis here as the DPRK—as North Korea's provocations have become more pronounced,” U.S. Defense Secretary Jim Mattis told reporters during a joint press conference with Indian defense minister Raksha Mantri Nirmala Sitharaman on September 26.

“We continue to maintain the diplomatically led effort in the United Nations. You have seen unanimous United Nations Security Council resolutions passed that have increased the pressure—economic pressure and diplomatic pressure on the North.”

Mattis was also clear that the administration is maintaining a strong deterrent posture in the meantime.

“And that is our goal, to solve this diplomatically. And I believe that President Trump has been very clear on this issue.”

However, the Trump Administration’s conditions to negotiate with North Korea might actually be exacerbating tensions with Pyongyang.

During a speech at the Institute for the Study of War in Washington, D.C. on September 25, Trump’s national security advisor Lt. Gen. H.R. McMaster told an audience that Pyongyang must accept inspections of its nuclear facilities and declare that it is  willing to give up its nuclear weapons program before Washington will enter negotiations. According to McMaster, the White House would consider it “unacceptable” for North Korea to possess a nuclear-armed intercontinental ballistic missile (ICBM) and the Trump Administration is willing to go to war to prevent such an eventuality.

“What we hope to do is avoid war, but we cannot discount that possibility,” McMaster said.

Analysts were unimpressed with the White House position—noting that the North Koreans are very unlikely to accept conditions such as those McMaster envisions.

“They are still trying to negotiate a North Korean disarmament,” Jeffrey Lewis, Director of the East Asia Nonproliferation Program at the James Martin Center for Nonproliferation Studies at the Middlebury Institute of International Studies at Monterey, said sarcastically of McMaster’s ultimatum.

Washington’s position is an indication that the White House is out of ideas on how to deal with North Korea.

“This is what we say when we’ve run out of ideas. It’s a retreat to a familiar corner,” Joshua H. Pollack, editor of The Nonproliferation Review and a senior research associate at the James Martin Center for Nonproliferation Studies, told The National Interest.

In the end, regime survival is the Democratic People’s Republic of Korea’s (DPRK) primary goal and nuclear weapons are the one tool that can guarantee Pyongyang’s sovereignty. There is no incentive for the Kim regime to give up its one trump card—so to speak. The Kim regime has learnt from the mistakes of former Libyan dictator Muammar Gaddafi, who was overthrown by U.S. and NATO-backed forces in 2011 even after receiving security guarantees in exchange for giving up his programs to develop weapons of mass destruction. The Kim regime is unlikely to repeat Gaddafi’s error.

Short of launching a nuclear first strike with uncertain prospects of successfully eliminating any North Korean retaliatory strike capability, the United States is likely stuck with dealing with a nuclear-armed Pyongyang. In the end, the United States will probably have to accept reality and adopt a deterrence posture as Washington has done every other time a nuclear-armed foe has emerged in previous years.

Nonetheless, on September 26, President Donald Trump reiterated that he is willing to go to war if North Korea will not give up its nuclear arsenal.

“We're totally prepared for the second option; not a preferred option.  But if we take that option, it will be devastating—I can tell you that—devastating for North Korea,” Trump said during a press conference at the White House.

“That's called the military option. If we have to take it, we will.”

Trump maintains that North Korea is a problem that should have been solved by previous administrations.

Certainly, we shall—one way or the other.