Why America Should Disinvite China to RIMPAC 2018 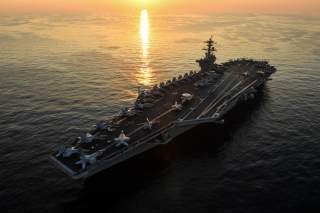 Now that the Trump administration stood up on its hind legs and declined to recognize China’s ‘market economy’ status, it should do the military equivalent and withdraw Beijing’s invitation to the next Rim of the Pacific (RIMPAC) exercise in 2018.

RIMPAC is the US Navy’s premier multilateral exercise and is held biannually in Hawaii. Once upon a time, it was for America’s friends in the Asia–Pacific region.

These repeated invitations are perplexing, given the People’s Republic of China’s stated objective of displacing the United States in Asia and its demonstrated willingness to bring this about.

From an intelligence perspective alone, the Chinese at RIMPAC is ill advised.

Any competent adversary at RIMPACcan gather useful acoustic signatures and other electronic intelligence. There are human intelligence opportunities, and close observation of ships, hardware, tactics and procedures, all offer intelligence advantages.

Spokesmen for the US Pacific Command, or PACOM, routinely claim China is shielded from the ‘sensitive’ parts of RIMPAC. Maybe. But this wouldn’t be the first time the US underestimated Chinese capabilities.

Despite these known (and ignored) intelligence risks, one hears other excuses for inviting China’s navy – all aiming at improved Beijing’s behavior.

It’s argued that extending the open-hand of friendship shows the Chinese they have nothing to fear. Perhaps, but not in the way American’s think: China now knows the US will do nothing, no matter what Beijing does.

Meantime, Japan, America’s main ally in Asia, is under incessant harassment and pressure from Chinese ships and aircraft in the East China Sea looking to carve off Japanese territory. In tandem, Beijing continues a crude, racist propaganda campaign demonizing the Japanese.

And even the US, the RIMPAC host. gets bullied.

Recall the harassment of and near collision with USS Cowpens by a Chinese Navy combatant in 2013, as well as a US unmanned underwater vehicle the Chinese stole just a few kilometers off Luzon in late 2016 – after Mr. Trump was elected.

Next, it’s said that if the Chinese just see how civilized people behave they will behave likewise. And if this doesn’t work, seeing American awesomeness first-hand will dissuade them from acting up.

These rationalizations presume the Chinese are just a little ‘slow’ and don’t know already how the other nations behave, or what the rules are.

The Chinese are not stupid. Could it be they know exactly what they are doing? Look at what the PRC has done since the first RIMPAC invitation in 2012.

It seized the Scarborough Shoals from the Philippines, a US ally. And it carried out an aggressive campaign in the South China Sea to construct seven artificial islands, three with major military airfields and all with significant naval facilities.

And all this despite President Xi Jinping’s assurances – given to the White House in 2015 – not to militarize the islands.

Read the Chinese press for a week to get a taste of the contempt for the United States and demands it clear out of Asia.

Some experts claim this isn’t ‘official policy.’ Right. Things the Communist Party of China doesn’t like don’t get published – more than once.

If all this is improved behavior, one wonders what constitutes bad behavior?

This is like holding a neighborhood party and inviting the neighbor who steals from your friends (and you), threatens them (and you), drives through their yards, parks his truck in their driveways while cocking his shotgun, and routinely declares he’s going to push you out of the neighborhood.

These repeated RIMPAC invitations show the US as supplicants – valuing the relationship more than does China. Not to mention the demoralizing effect on American allies.

In 2016, Japanese Navy officers were refused entry onto Chinese ships at Pearl Harbor – contrary to both exercise rules and good manners. Instead of raising merry hell and showing the Chinese Navy the door, the US hushed things up. The Japanese noticed.

Expect Beijing to demand equal billing as a RIMPAC co-sponsor before long. And eventually set up its own rival RIMPAC elsewhere.

All these concerns are well known, but China is still invited. Curiously, nobody knows who makes the decision to invite them.

Somebody in the Trump Administration or Department of Defense must go on record and reveal evidence proving that China’s participation in RIMPAC 2014 and 2016 improved Chinese behavior.

And then explain how inviting the PLA to RIMPAC 2018 is going to produce better results.

That’s a tough case to make, so expect to hear that we need China’s help with North Korea – even though Beijing insists it has no influence over Pyongyang.

Withdrawing the invitation to RIMPAC 2018 is easy. Just declare the timing isn’t right or that the matter is being studied. That’s how China does it. Or just invite Taiwan – a democratic ally that actually deserves to come.

Doing something dumb once is understandable. Doing the same thing twice is perplexing. Do it a third time and one recalls a US Marine infantry officer’s recent comment: ‘Sir, I think we want to lose wars.’