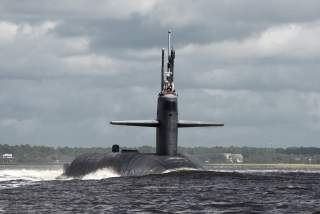 Te large-scale buildup of China’s naval forces is the most visible part of a major rearmament campaign that has been under way for more than a decade. But Chinese development of modern and increasingly quiet submarines poses one of the more serious strategic challenges for the United States and other nations concerned about Beijing’s growing hegemony in Asia.

The increasing size of the People’s Liberation Army Navy fleet of surface vessels captures most international attention, based on the sheer numbers and advanced weapons on an array of new warships.

Most notable among them is a refurbished Soviet-era aircraft carrier – the Liaoning, which was the first of its kind commissioned into the PLA Navy in 2012 – and development of its first indigenous ski-jump carrier, a vessel with a sloped flight deck.

China’s first domestically constructed carrier will be commissioned in 2020. Coincidentally, the Liaoning was a refurbishment of the Varyag, a Kuznetsov aircraft carrier, which has a sloped flight deck. The difference between the two is size, with the China-made one smaller.

Since 2004, six new PLA Navy classes of indigenous warships – destroyers, frigates and corvettes – were deployed. The ships include some that appear similar in design to the US Navy’s Aegis destroyers.

Less noticed but perhaps more strategically significant is China’s growing force of submarines, including both conventional and nuclear armed vessels. As with other Chinese strategic and conventional military forces, submarines are a growing threat for one key characteristic – their missiles.

Most of China’s submarines are older and relatively noisy – and thus easy to detect, track and destroy by US attack submarines. But the force is being upgraded and made more lethal by the introduction of new submarines armed either with nuclear or cruise missiles.

However, in fewer than three years this force will grow to between 69 and 78 submarines.

The number of anti-ship cruise missile submarines is also increasingly significantly. Since the 1990s, China has built 13 Song-class attack submarines and 17 Yuan-class ones with diesel-electric air-independent power attack submarines. Three more Yuans are slated for deployment by 2020.

For nuclear submarines – those capable of longer-range missions from China’s coasts, the PLA Navy has since 2002 built two Shang 1-class nuclear attack submarines, and four Shang 2-class ones.

Coming soon will be a more modern and advanced missile submarine, the Type 096, with construction expected to begin in the early 2020s and armed with a new more lethal missile, the JL-3.

And Beijing is working on a new class of nuclear-powered attack submarines, based on the Shang class called the Type 093B guided missile nuclear-attack submarine.

According to the Pentagon, the Type 093B “not only would improve the PLA Navy’s anti-surface warfare capability, but might also provide it with a more clandestine land-attack option.”

The PLA Navy also has been showing off its new undersea military power. A recent video provided an inside look at the secretive world of China’s submarine forces.

Another recent report, this one by the US Office of Naval Intelligence, regards China’s submarine forces as part of what Beijing calls “non-contact warfare” – the use of weapons and platforms capable of conducting long-range, precision attacks from outside an enemy’s defended zone.

For the nuclear missile carriers, the four Jin-class submarines are based in the South China Sea and have been set to begin strategic patrols for the past several years. However, there has been no official confirmation from China that the patrols, with nuclear-tipped JL-2 missiles, have begun.

China in the past has kept its missile warheads separate from the actual missiles. If the Jins are carrying nuclear-tipped missiles, it would be the first such deployment.

Currently, US Navy submariners are closely watching advances in Chinese submarine forces that remain lacking in terms of capabilities and quietness of American submarines that have decades of experience operating around the world.

However, China is making rapid strides in closing the gap.

Abhijit Singh, a military analyst at India’s Observer Research Foundation, believes China is seeking a network of port facilities to be used for its nuclear submarines operating in the Indian Ocean. They have included a bid to set up facilities in several locations, including Sri Lanka, Pakistan, Myanmar and Bangladesh.

“Ultimately, China’s submarine operations in the South Asian littorals portend greater Chinese force projection in the Indian Ocean,” he stated in a recent article in The Interpreter, an online publication of the think tank, Lowy Institute for International Policy, in Australia.

Rick Fisher, a China military affairs analyst with US think tank, the International Assessment and Strategy Center, sees the Pentagon’s notice of the next generation of the Type 096 third-generation missile submarine as one of the more significant disclosures.

“This means the third generation Type 095 nuclear attack sub could be building around the same time,” Fisher said, noting that reports from Asia indicate the PLA may build 14 Type 095 attack subs.

“If realized, this could mean a [PLA Navy] SSN fleet of about 20 submarines,” he said, referring to the code used for nuclear-powered submarines. “This would put great pressure on the US Pacific deployed [attack submarine] fleet and raises the question of whether the PLA will soon target US missile submarines.”

The annual Pentagon report views China’s Jin submarines and their JL-2 missiles as a potent strike capability with enough range to reach the continental United States. “To maintain a continuous peacetime presence, the [PLA Navy] would likely require a minimum of five Jin-class submarines; four are currently in service,” the report said.