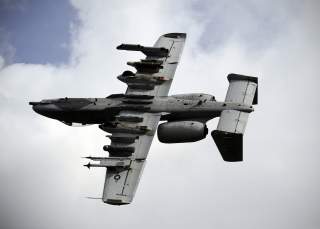 Consisting of a rocket motor, seeker, warhead and fuze, APKWS rockets can attack targets at ranges up to 3 miles, according to BAE Systems information. BAE developers also report that the weapon has an 90-percent probability of hitting a target within two meters per single shot.

The Pentagon is fast-tracking new orders of laser-guided precision rockets needed to attack ISIS as US Coalition aircraft maintain an extremely high op-tempo of offensive operations in Iraq and Syria.

A-10 Warthog attack planes, and other aircraft, have been consistently attacking ISIS fighters on the move Advanced Precision Kill Weapons Systems (APKWS) rockets, laser-guided Hydra 70 2.75inch rockets fired from helicopters and fixed wing aircraft. The weapon, first developed more than a decade ago, attaches a guidance section to unguided rockets, giving them ability to pinpoint targets on the move with laser precision.

In response to the fast-growing demand for weapons to attack ISIS, The U.S. Navy has awarded BAE Systems a $180.5 million contract to continue producing Advanced Precision Kill Weapon System.  The Navy deal is part of a broader effort to, in many instances, arm US allies with APKWS in the current fight against ISIS.

“We’re delivering ahead of schedule even with the growing demand,” Rachel Guill, director of Precision Guidance Solutions at BAE Systems, said in a written statement.

U.S. Air Force weapons loaders say the current rotation of attacks against ISIS, from this past January forward, has generated fast-growing demand for more APKWS rockets.

“This rotation has been the busiest op-tempo of weapons expenditures and sortie hours. We are tracking right now about 2,700 bombs dropped since we have been here in January,” SMSgt Chris Cochran, 447 Munitions Fight Chief, said in a DoD report.

Many of the US APKWS weapons are stacked, assembled and loaded at Incirlik Air Base, Turkey, before moving forward with attacks on ISIS in Iraq and Syria.

Consisting of a rocket motor, seeker, warhead and fuze, APKWS rockets can attack targets at ranges up to 3 miles, according to BAE Systems information. BAE developers also report that the weapon has an 90-percent probability of hitting a target within two meters per single shot.

Unlike 100-pound, tank-killing Hellfire Missiles, APKWS rockets are well suited to attack smaller targets, such as groups of ISIS fighters. It is well documented that ISIS often deliberately blends in with civilians to thwart US Coalition attacks. Such a phenomenon underscores the merits of smaller, precision weaponry which can isolate enemy targets while avoiding damage to nearby civilians or surrounding infrastructure.

The Marine Corps is now advancing requirements to arm its fleet of Osprey helicopters with new weapons, including the possibility of APKWS.